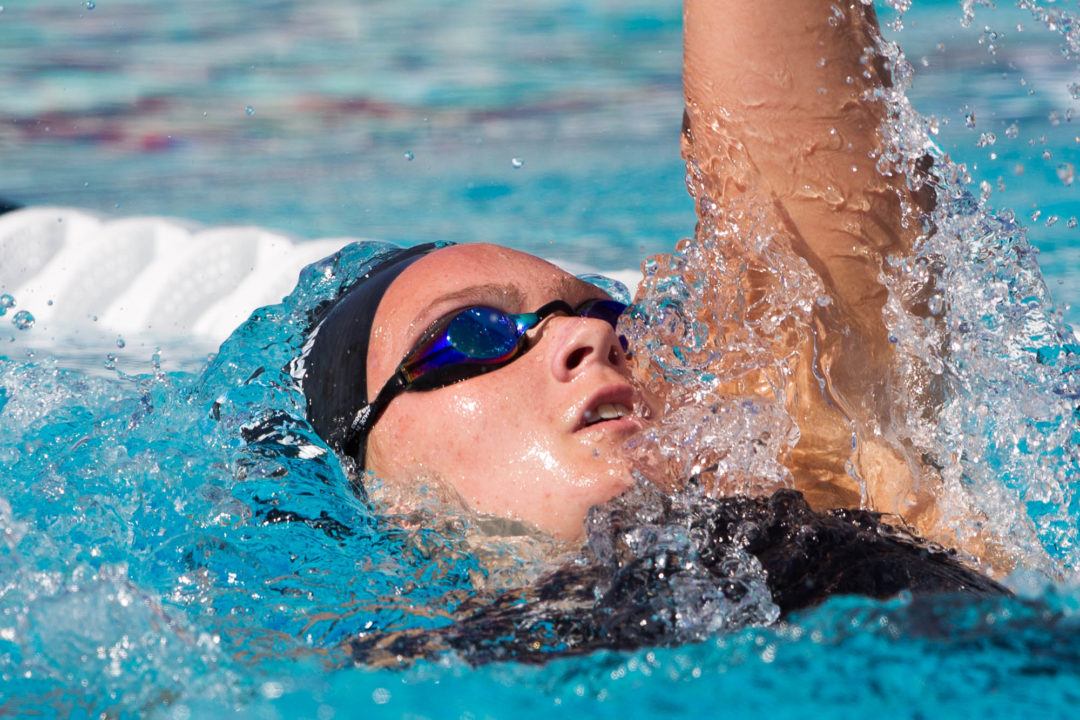 The favorite to win this race is Stanford's Ally Howe, who broke Natalie Coughlin's American Record and became the first woman to clear the 50 second barrier since 2002 at the 2017 Pac-12 Championships. Archive photo via Tim Binning/TheSwimPictures.com

As we look forward to the 2017 Women’s NCAA Championships, which kick off tonight, we’re looking at a 100 back field that could see someone break 51 seconds and still miss out on the top 8. At this point, a 50.8 is ranked 9th in the nation, and a handful of women hold times in the 51.1-range.

The favorite to win this race is Stanford’s Ally Howe, who broke Natalie Coughlin’s American Record and became the first woman to clear the 50 second barrier since 2002 at the 2017 Pac-12 Championships. Howe erased the old record with a blistering 49.69, making her 6 tenths faster than anyone else this season.

The big question heading into the meet is whether or not other swimmers in the field will join her in breaking 50 seconds. Teammate Janet Hu (50.29) and Cal’s Kathleen Baker (50.27), the Olympic silver medalist in the long course version of this race, have each been 50-low this season. Hu, however, will be swimming this event on the back end of her 100 fly/100 back double, which makes it even more challenging.

Fellow U.S. Olympic backstroker Olivia Smoliga, a senior for the Georgia Bulldogs, will also step up to the challenge. Last season, Smoliga wound up in the B-final after prelims, finishing 9th in finals with a personal best 50.58 that would’ve placed 2nd in the final. She’s been nearly that fast this season already with a 50.60 from the SEC Championships. UCLA’s Linnea Mack will look to join her in the final after finishing 10th behind Smoliga last season. Mack enters with a personal best 50.56 from Pac-12s.

Returning All-Americans in this race include Cal’s Amy Bilquist, Tennessee’s Kira Toussaint, Missouri’s Nadine Laemmler, and NC State’s Alexia Zevnik. Both Zevnik (50.80) and Bilquist (50.85) have been sub-51 this season. Toussaint boasts a lifetime best of 50.85, while Laemmler enters with a best time of 51.14.

Hu will join her under the 50 second barrier???

This could be both a question and a statement

Since this is the last year I can toss out this fact, and it’s one of my faves: the year Natalie Coughlin broke 50, the time of the second place finisher in the event would not be invited to this year’s NCAA meet.