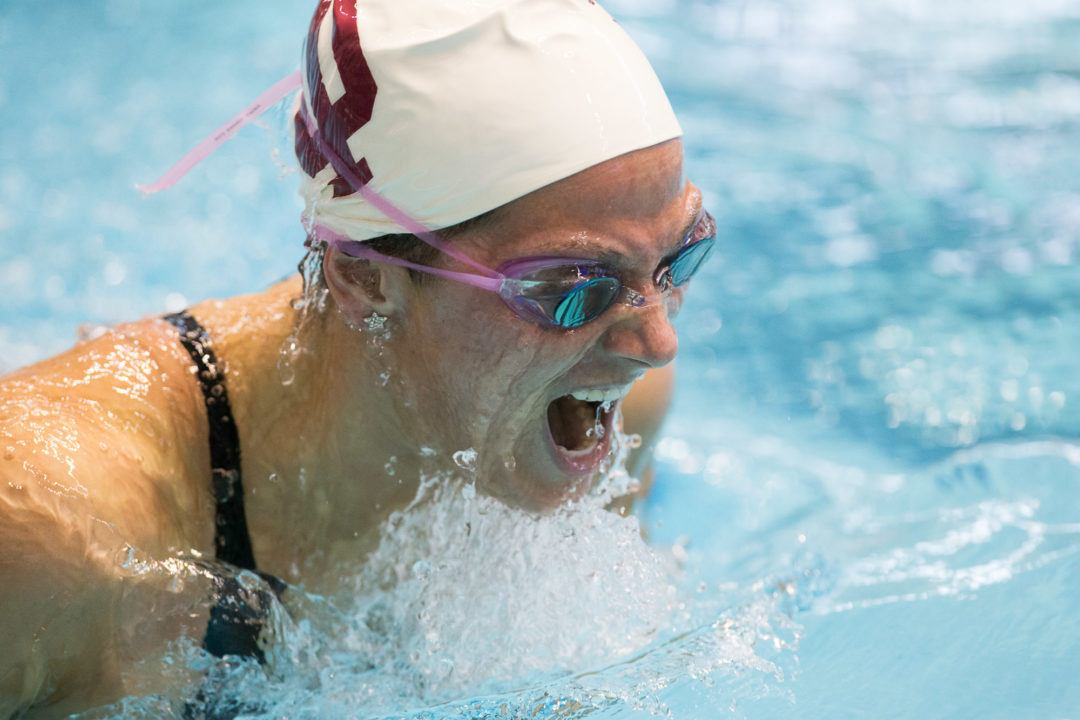 Gia Dalesandro destroyed her own personal best at Big Tens this year, earning her the 5th seed in a very tight field for the 100 fly. Archive photo via Tim Binning/TheSwimPictures.com

Swim fans were treated to an absolutely dominating swim from Louisville’s Kelsi Worrell last season, as she unearthed a 49.43, winning by over a full second and breaking her own NCAA, American, and U.S. Open record. It’s astounding how fast this race has become, with Worrell being the first to take down Natalie Coughlin’s incredible records from the early 2000’s and the first woman to crack the elusive 50-second barrier. She has graduated, meaning that the flurry of 50-points in this race will be battling it out with no clear favorite.

A whopping nine women have broken 51 seconds thus far in the season, and the top five seeds are between 50.38 and 50.45. That’s incredible depth, and considering only Worrell has ever broken 50 seconds, this field is fast, too. In fact, only Worrell, Coughlin, and Rachel Komisarz have ever been faster than 2017 leader Janet Hu‘s 50.38, and 2012 Olympic gold medalist and former world record holder Dana Vollmer’s lifetime best in this race would tie her for 4th in the field this season.

So, it’s Hu on top at 50.38, and coming in right on her heels is USC freshman Louise Hansson. The Swede has been throwing down fast times all season, and really pushed the envelope with a huge Pac-12 performance in this race to win the title in a very packed final. In fact, the top four seeds raced in the Pac 12 final in one of the most electric races of the meet. The third seed comes in at 50.40 (Cal’s Farida Osman) and then fourth is Cal’s Noemie Thomas (50.44). All four of these women come in off of lifetime bests from February.

5th seed Gia Dalesandro, an Indiana senior, struggled to improve in her sophomore and junior seasons. Luckily for her, that struggle is no longer. She broke out in her freshman year, popping a 51.75 at Big Tens, which marked a two-plus second drop from high school. While she was able to get close to that time the next two years, it wasn’t until 2017 Big Tens, where she absolutely went on a tear with a 50.45, dropping 1.5 seconds from her 2014 lifetime best. That’s notable, and while one can never tell if a swimmer can replicate that kind of break out swim a month later, Dalesandro is very much so in the race for the national crown. Her Big Ten competitor Liz Li of Ohio State also blew away a personal best, posting a 50.90 for 2nd in that race at Big Tens.

Last year’s runner-up Sarah Gibson comes in 6th with a 50.71, which is almost three tenths faster than her 50.99 seed time last season. She ended up going 50.61 in the final, touching ahead of Osman, Hu, and UNC’s Hellen Moffitt. The Tar Heel senior is the 7th seed at 50.86, which is just off of her personal best of 50.61 from ACC’s in 2016. The ninth and final competitor under 51 seconds this year is Georgia’s Chelsea Britt, who comes in at 50.93, which is her best time ever (an improvement since she has left the Florida State program).

An additional nine women have been 51’s this season, including freshmen Maddie Murphy of Cal and Veronica Burchill of UGA. Also lurking is another Bulldog, Kylie Stewart. She made the A final last year with a 51.58 in the morning and ended up 8th overall, but is seeded way back at 24th this year with a 52.05.

Dark horse: Annie Ochitwa (Arizona). While just scraping into the B final last year, coming in at 15th in the morning, Ochitwa had a statement swim to win the final with a 51.02, over a full second drop from the morning. To put a cherry on top, Ochitwa was still 18 years old, meaning she had broken Natalie Coughlin’s 17-18 NAG record in that event. She’s the 26th seed (52.09) but may well jump up and claim a spot in the finals– a 51.02, meanwhile, could be fast enough to crack the A final this year, too.

The most open individual race of the women’s meet with no clear favorite.
Maybe with the 500 and 1650 free too.

It is because they all well behind world standards. The farther one goes from top ranking the higher density of results becomes.

what world standards ? in SCY ?

It doesn’t meter. Listed in article swimmers are all of the same level at fly sprint that is well behind Kelsi Worrel who in her turn was behind Sjostrom and Oleksiak in Rio.