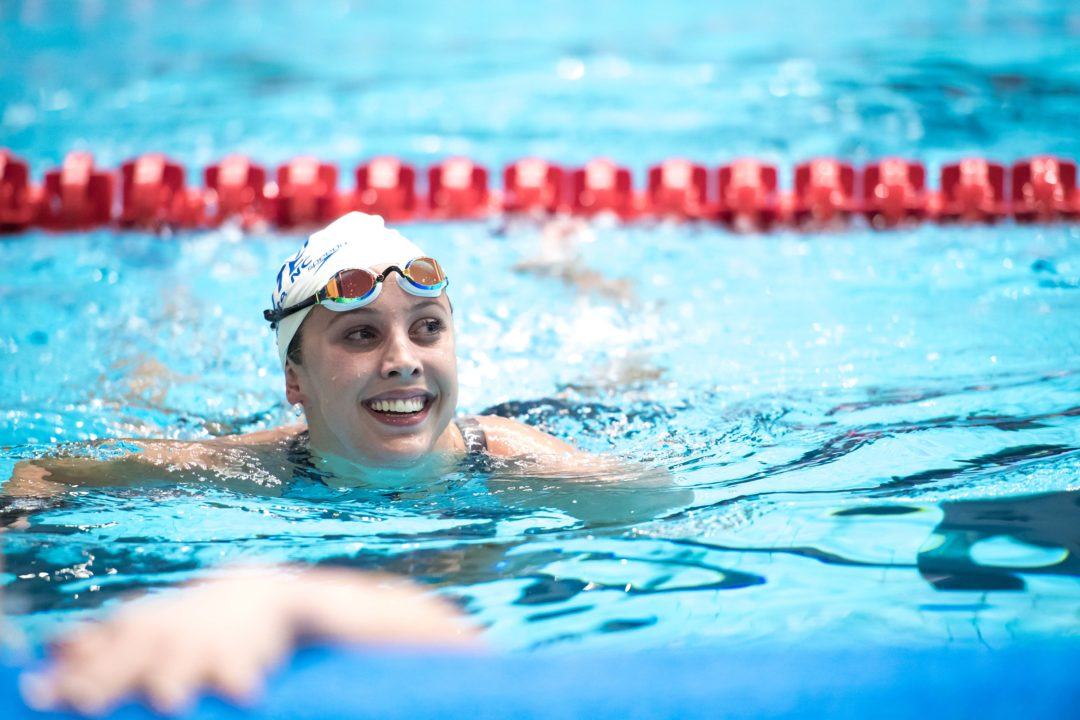 Kathleen Baker will be in a close race for a spot on the World Championship team in the women's 50 back. Current photo via Mike Lewis/Ola Vista Photography

Four more events are on tap for tonight’s finals from Indianapolis: the 400 IM, 100 fly, 50 breast and 50 back. Let’s take a closer look at the favorites heading into tonight:

The men’s 400 IM sets up to be a three-way battle between Georgia Bulldog teammates Chase Kalisz, Jay Litherland and Gunnar Bentz after taking the top three spots in this morning’s prelims. None of the three have qualified for Budapest as of yet.

Kalisz is the odds-on favorite here and should win easily as his best time of 4:06.75 is well ahead that of Litherland (4:11.02) and Bentz (4:13.67). Kalisz is also a favorite to qualify in the 200 IM, while this will be both Litherland and Bentz’s best shot at the team after they both missed in the 4×200 free relay yesterday. The only two men expected to potentially challenge Litherland and Bentz for the second spot, Josh Prenot and Abrahm DeVine, won’t be there tonight as Prenot was a no-show in prelims and DeVine was disqualified.

The women’s race had a surprise this morning, as distance freestyler Leah Smith dropped a big personal best to qualify 1st in 4:36.90. She all of a sudden becomes a major threat to qualify individually in this race, and will look to add a third event to her schedule in Budapest. Elizabeth Beisel also looked good this morning in 4:38.78, and probably has a bit more in the tank. Ella Eastin and Brooke Forde qualified 3rd and 4th overall and will challenge, and Bethany Galat and Madisyn Cox are very capable of throwing down a big swim as well. They’ll have the outside lanes tonight, Galat in 1 and Cox in 8.

Another thing to watch for in this event tonight is the battle for Junior Worlds qualifying, as Madison Homovich, Christin Rockway and Zoe Gawronska will fight for two available spots in the C-final.

Kelsi Worrell was dominant last night winning the 50 fly in 25.69, and was again this morning in the 100 fly prelims. She qualified 1st in 57.40, and likely has a 56 in her tonight. She’s on the cusp of adding a third event to her Worlds schedule after also qualifying in the 4×100 free relay on night 1.

The battle for second will be close. The next five women were 58-something this morning, led by Hellen Moffitt who had a PB of 58.24. Sarah Gibson has had a good showing thus far in Indy and qualified 3rd in 58.41, Mallory Comerford has been on fire, and Katie McLaughlin is looking at her last legitimate shot at qualifying for Worlds. Amanda Kendall was just 6th this morning in 58.9, but has been as fast as 58.27 this season.

Four men posted 51-second swims this morning and will fight it out for the two spots tonight. Jack Conger rebounded after a tough 200 free yesterday to qualify 1st in 51.37, just ahead of Caeleb Dressel who dropped over eight tenths off his best in 51.38. A spot in the top two would qualify Dressel for his 3rd individual event at the World Championships, already booking a ticket in the 100 free and 50 fly.

Veterans Tom Shields and Tim Phillips are staring at their last real opportunity to qualify for the team tonight. Shields looked strong on the way home this morning, and qualified 3rd in 51.73. Phillips had a lot of early speed, but struggled coming back. He sits 4th in 51.76.

In the battle for Junior Worlds, the entire C-final (minus Ryan Hoffer) will battle for one available spot behind Louisville’s Nicolas Albiero, who qualified in the B-final.

Lilly King will be tough to beat tonight in the 50 breast after cranking out a meet record of 29.96 this morning, and is within striking distance of Jessica Hardy‘s suited American Record of 29.80. Katie Meili and Molly Hannis will be her biggest challengers, but will need to be much better than this morning to have a shot at qualifying, as only the top finisher in the 50 back, breast and fly get taken to the World Championships.

16-year-olds Emily Weiss and Zoe Bartel, along with 17-year-old Ema Rajic, will duke it out for two spots on the Junior Worlds team in the B-final

After putting on a dominant display in the men’s 200 breast last night, Kevin Cordes was on fine form again this morning posting a new meet record in the 50 in a time of 26.89. He’ll be the man to beat, with Andrew Wilson, Cody Miller, Nicolas Fink and Michael Andrew all lurking behind. If Cordes is able to match his morning swim, one of these guys will need something special to challenge him for the spot.

Ali DeLoof and Hannah Stevens both went sub-28 this morning in the women’s 50 back heats, and will clash with last night’s 200 back winner Kathleen Baker for the top spot. Olivia Smoliga was expected to challenge in this race as well, but slipped off the start in prelims and missed the final. She did do a time trial after the session, clocking 28.08, a time that would’ve been 3rd fastest in prelims.

Grace Ariola and Katharine Berkoff, swimming in lane 7 and 8 in the A-final, will go head-to-head for the one available spot on the Junior Worlds team.

Veteran Matt Grevers led the men’s 50 back this morning in 24.75, and has to be the favorite to earn a World Championship spot tonight. Both Justin Ress and Michael Andrew were 24.96 for a tie for 2nd, while 100m back Olympic champ and world record holder Ryan Murphy was back in 7th in 25.26. This field is very tightly bunched, but Grevers, as the 2015 World silver medalist, will be tough to beat. Murphy is obviously capable of winning, out in lane 1 with some open water, and Ress could surprise too. He has been 24.90 in-season this year.

That is a ridiculous DQ…

Cox has not been doing well this meet, I do not think she took prelims easily, especially after what happened in 200 breast. No way galat wins this.

This is my unlikely mental scenario: “Dressel goes 50.86 in the 100 fly tonight” “Schooling gulps nervously”

Schooling stood on the blocks next to the GOAT and took him down…at the Olympics. Doubt Dressel swimming a fast time will make him “gulp”.

You were off by a hundredth. Nice try.

Do you need a subscription to watch the livestream tonight on the NBC sports app?