Return of the Lochte Rule: Abrahm Devine DQ’d At US Nats 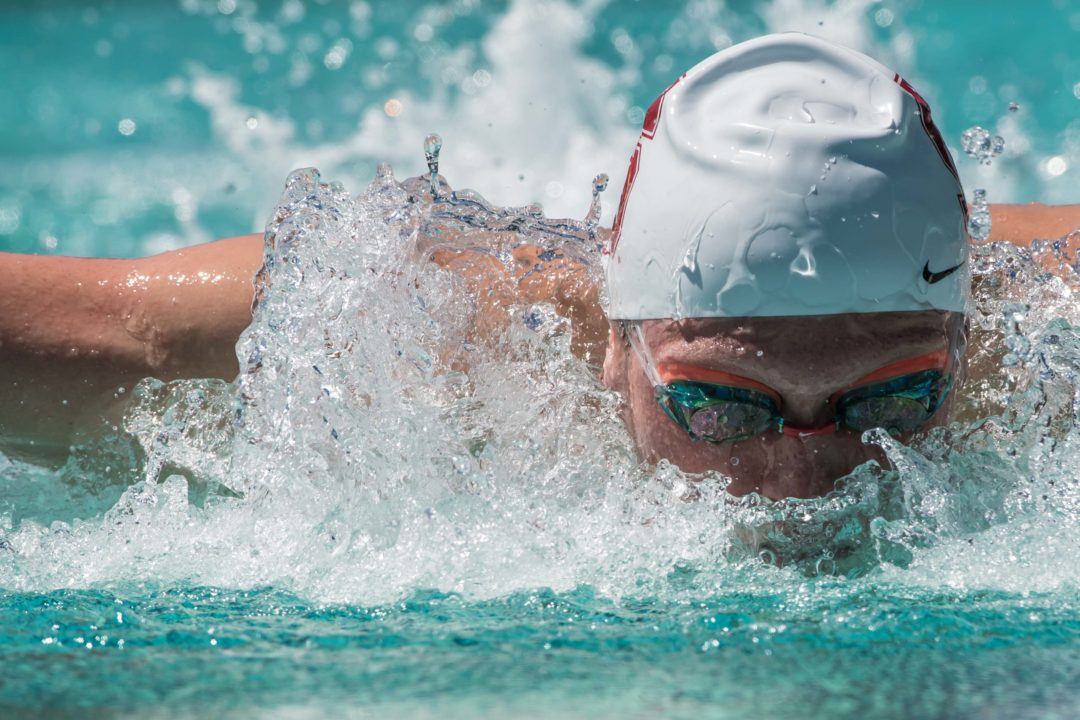 As it did last summer, the so-called 'Lochte Rule' prohibiting IMers from underwater kicking on their backs outside of the backstroke leg has cropped up at the biggest American selection meet. This morning the rule nabbed Stanford's Abrahm Devine, who was disqualified after posing a 4:17.55 that would have placed him fourth heading into the final. Archive photo via Mike Lewis/Ola Vista Photography

As it did last summer, the so-called ‘Lochte Rule’ prohibiting IMers from underwater kicking on their backs outside of the backstroke leg has cropped up at the biggest American selection meet. This morning the rule nabbed Stanford’s Abrahm Devine, who was disqualified after posing a 4:17.55 that would have placed him fourth heading into the final.

The Lochte Rule got its name from Ryan Lochte, who in 2015 started doing all of his underwater kicking on his back, finding that to be faster than underwater kick on his stomach. But FINA pushed back,saying that in the IM races specifically, underwater kicking on one’s back counts as backstroke, and doing it in any part of the IM outside of the backstroke leg breaks the IM rules requiring a swimmer to swim exactly one quarter of the race in each stroke.

The rule was heavily enforced at Olympic Trials last summer, disqualifying a couple key swimmers. This summer, it hits Devine, who would have earned a spot in the A final. His 4:17.55 would have ranked him behind only Olympians Chase Kalisz, Jay Litherland and Gunnar Bentz. Shortly after the race, Devine’s infraction was announced. The video of Devine’s race does has a fairly close-up shot of Devine’s final turn (freestye-to-freestyle), which appears to be the turn for which he was called.

is the video available (for non-US residents) to watch?

If you use a VPN and change your location to the US you can watch the stream for free.

oh right i forgot about that – thx

What are they teaching their swimmers there at Stanford!!!!!

Oh, you took a dolphin kick on your back in FREEstyle?
SHAME ON YOU!!!!!!!!!!!
Don’t you know FREEstyle isn’t freestyle?!

Seriously, this rule is one the most idiotic thing FINA has ever done, and that’s really saying something

Correct call. Kudos to the judge that called it, and to the referee for upholding it. That said, this is a horrible, horrible rule. Thanks FINA.

Didn’t mean to down-vote. But Kudos to the judge – only if it’s being called evenly across the board. I’ve found that this call – like some others (like submerged backstroke finishes) can be unfair because only certain officials will call them. There seems not to be very much consistency with them. That’s one of the things that makes these kind of calls so frustrating.

Officials do their best at all times, but we can not always clearly witness (and know we witnessed) every infraction by every swimmer. E.g. the swimmer may touch/turn on the right side of the blocks, while the official must stay on the right of the block, so the view may be partly obstructed and we don’t call a DQ unless we are 100% certain.

There is a simple solution to your concern: insist that your athlete swims legally in every competition. The rules are fairly simple. When a swimmer ‘gets away with it’ for months or years and then is finally DQed at Nationals, I would consider that a failing of their coach (or the swimmer if they disregarded their… Read more »

I thought freestyle was anything…hence the name freestyle

Silly rule, especially since part of what makes swimming such a compelling sport is all the innovations to technique that have come over the years.

I was just about to say that. Yes it is ridiculous!