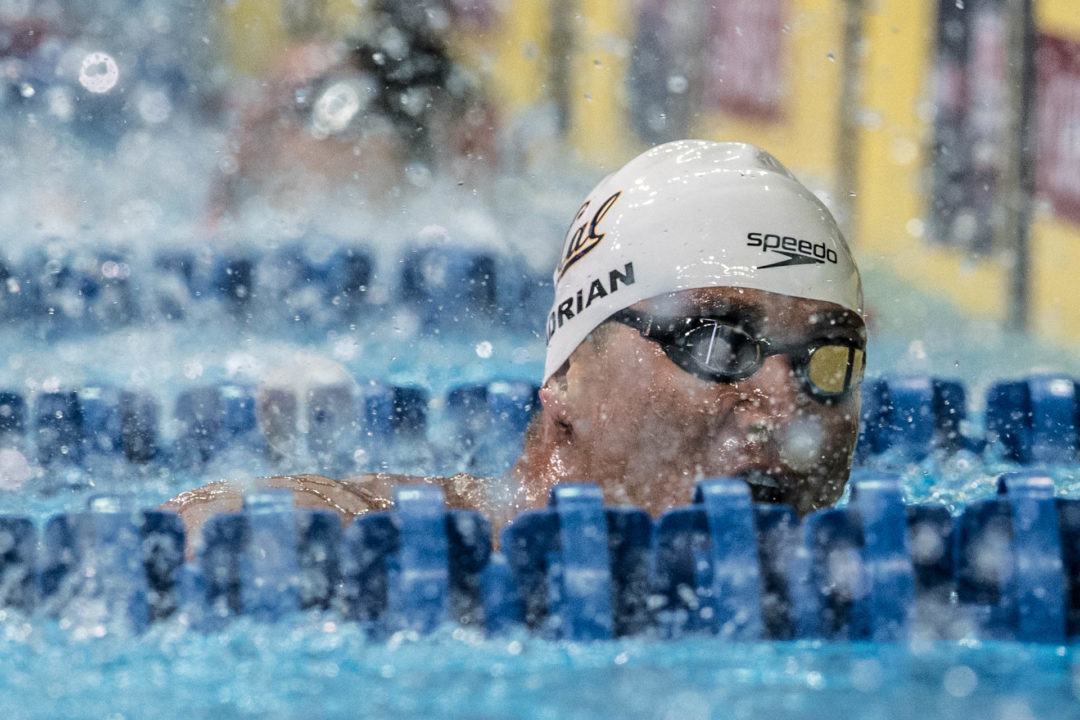 Adrian was a sub-48 second 100m freestyle in semifinals, the fastest he's ever been on U.S soil. With Adrian leading the charge, the excitement in the race lies in who the top four swimmers will be that are guaranteed a roster spot for the 4x100m freestyle relay. Current photo via Mike Lewis/Ola Vista Photography

Six more roster spots are on the line tonight as the clock winds down to day five finals here in Omaha, Nebraska at the 2016 U.S Olympic Trials.

Kevin Cordes is up in the men’s 200m breaststroke final to kick things off. After flirting with the world record in semifinals and putting up a new U.S Open record with a time of 2:07.81 he’s the heavy favorite to win. Cordes won the 100m breaststroke earlier in the meet.

Josh Prenot of Cal is in a great spot to make the team in the 200m breaststroke. He was also under world record pace for a portion of his semifinal swim before falling off the pace and settling for second overall.

The women’s 200m butterfly will follow both the women’s 100m freestyle and men’s 200m backstroke semifinals. Cammile Adams will be looking to make her mark in the race. She looked great in both prelims and semifinals and will lead the charge from lane four tonight.

Following the women’s 200m butterfly is the men’s 100m freestyle where reigning Olympic champion Nathan Adrian is in a great spot to make the Olympic team. Adrian was a sub-48 second 100m freestyle in semifinals, the fastest he’s ever been on U.S soil. With Adrian leading the charge, the excitement in the race lies in who the top four swimmers will be that are guaranteed a roster spot for the 4x100m freestyle relay.

Along with all the finals action is plenty of fast swimming in the semifinals including Ryan Lochte and Michael Phelps‘ 200m IM semifinals. The two of them were the top two seeds this morning and are likely going to set themselves up for another classic Lochte-Phelps dual for tomorrow night’s final.

Move over Kevin Cordes, Josh Prenot is the new American record holder in the 200m breaststroke and the second fastest performer of all time in this event.

Prenot swam the most controlled 200m breaststroke of the field, waiting patiently until the last 50 to fully strike and take down both Cordes and Texas’ Will Licon.

After the first 50, it was Cordes ahead of the field with a 28.49 split, turning in under world record pace. Prenot turned fourth in 29.21 behind Cordes, Cody Miller and BJ Johnson.

At the 100-meter mark Cordes turned in a 1:00.77, well under world record pace and almost a full second faster than Prenot who turned in 1:01.47. Once again, he was fourth to the wall, this time behind Will Licon and Miller.

On the last wall Cordes was ahead and still well under world record pace with just 50-meters to go. Prenot moved up to second at the 150, passing both Licon and Miller in order to make his move.

Prenot began to fly, splitting a 32.98 on the last 50 (almost a full second faster than anyone else in the field), and heading hard into the wall. He passed Cordes with roughly 30-meters to go and charged to the wall, chasing the world record.

Cordes and Licon began to battle for the silver, trading the second place position back-and-forth.

Prenot touched in for gold in 2:07.17 to put up the second fastest performance only behind world record holder Akhiro Yamaguchi.

Abbey Weitzeil led the way through the semifinals of the 100m freestyle, going out in under world record pace and then separating herself from the rest of the competitors in her semifinal.

Weitzeil touched in at 53.57 to knock one one-hundredth off her prelim swim and set up another personal best time.

Cutting things close in her heat was Dana Vollmer who rocked a 53.74 to come within two-tenths of Weitzeil.

Vollmer goes in as the fourth overall seed now after Simone Manuel and Amanda Weir dropped very fast times in the first semifinal. Manuel won the race in a 53.64 with Weir second in 53.72.

Lia Neal was the only other swimmer in the field to drop under 54-seconds, putting up a 53.87 in the second semifinal to finish fifth overall.

Kelsi Worrell, Katie Ledecky, and Allison Schmitt are the remaining finalists. Both Missy Franklin and Natalie Coughlin failed to advance to the final.

Both Ryan Murphy and Jacob Pebley stole the show in the men’s 200m backstroke semifinals, putting up what appeared to be easy, yet fast swims.

In the second semi, Murphy was a 1:55.04 to beat Pebley towards the wall. Pebley touched in at 1:55.18 to secure himself the second overall seed heading into finals.

Reigning Olympic champion Tyler Clary may have his work cut out for him. He qualified third, and he’s going to need to get past at least one of the two Cal standouts tomorrow night if he hopes to qualify for the Olympic team.

Sean Lehane was fourth overall with a 1:56.43, swimming a similar time to Michael Taylor who dropped a 1:56.78. Taylor’s time breaks the previous world junior record held by Ly Guangyuan at 1:56.79.

Cammile Adams is going to the Rio Olympic Games after a first place finish in the 200m butterfly finals. Adams posted a 2:06.80 to come very close to her trials winning time from 2012.

Cassidy Bayer took things out fast, turning first at the 50-meter wall to lead the field. At the 100-meter mark she faded to second as Hali Flickinger took over the lead.

At that point, Adams moved from seventh to third as she increased her speed heading into the third wall. At the 150, Adams was in first with Flickinger second and Bayer fourth.

With a 33.04 split on the final 50, Adams sealed the deal. Bayer tried to close on Flickinger and made up some ground, but ultimately didn’t have enough room to beat her.

100m butterfly champion Kelsi Worrell finished seventh in 2:11.85. Worrell was eighth off every single wall, but managed to close on Hannah Saiz on the last 50.

It was an absolute dog fight in the men’s 100m freestyle to say the least, and reigning Olympic gold medallist Nathan Adrian managed to come out on top.

With the second fastest time in the world this year, Adrian held off both Caeleb Dressel and Ryan Held in order to grab the win with a 47.72.

Dressel was second in 48.23, securing an individual swim in Rio by just three one-hundredths of a second as Held touched third in 48.26.

Anthony Ervin touched fourth in 48.54, securing his spot on the Olympic team as a relay swimmer. He went out fast, turning in first, but ultimately couldn’t hold on.

Lilly King came back hard in the first semifinal to win the event in 2:24.03. That time will double for King as the fastest qualifying time heading into tomorrow night’s final.

Second overall is 2015 world championship silver medallist Micah Lawrence. Lawrence was a 2:24.66 to win the second semifinal after being chased down by Tennessee’s Molly Hannis.

With quick closing speed, Hannis came back on Lawrence but not enough to give her the semifinal win. Hannis was second in the semifinal, and third overall, with a 2:24.91.

That time was faster than Bethany Galat who finished behind King in the first semifinal. Galat’s 2:25.25 ranks her fourth as she gears up for tomorrow night.

Both Breeja Larson and Emma Reaney missed qualifying for the final.

Both Michael Phelps and Ryan Lochte put on clinics in their heats, pushing way out in front in order to win their respective semifinals and take the top two spots heading into finals.

Phelps looked easy on the fly, very strong on the backstroke, and smooth on both the breaststroke and freestyle. In the last 10-meters Phelps slowed down in order to conserve energy for tomorrow night where he’ll be up against Ryan Lochte.

Lochte was out quick on the fly and didnt’ really let up much. His breaststroke, which has been the point of concern this week after a pulled groin on day one, looked as though it didn’t pain him. Just like Phelps, he eased up towards the end putting up a 1:56.71.

The final times in each race are only the end result. A race is won by much more than a time; it’s won by underwaters, stroke rate, turn time, DPS, and much more. See what went into these spectacular swims in the Finals of the 2016 U.S. Olympic Trials in Omaha through a TritonWear lens!

Lane 9 day 5 hosted by Ariana Kukors with Amanda Beard and John Naber as guests plus Jack Bauerle mic’d up and Dwyer nation
https://www.youtube.com/watch?v=T0nTNaHBtiU