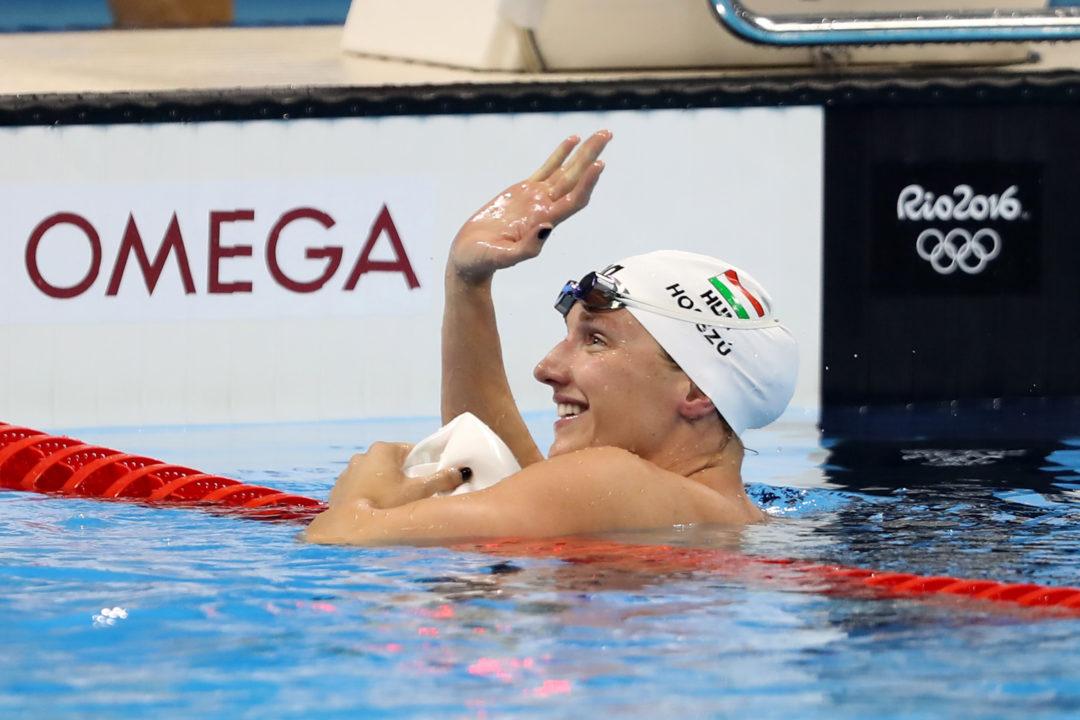 Hungary's Katinka Hosszu will look for her first Olympic medal tonight after narrowly missing the wolrd record this morning in the women's 400 IM. Current photo via Simone Castrovillari

After a crazy fast paced opening prelim session of the 2016 Rio Olympic swimming competition, the first finals session should be absolutely wild. On the docket are four finals and two rounds of semi-finals, with a mix of heartbreak and triumph no doubt impending.

The opening race will be the men’s 400 IM final, which sets up to be a fantastic battle. There’s Kosuke Hagino, the man picked by many to win gold who visually cruised his way to the 3rd seed this morning in a time of 4:10.00. Then there’s his Japanese teammate Daiya Seto, the two-time defending world champion who actually put up a best time this morning in 4:08.47, though he didn’t even win his heat. That went to American Chase Kalisz, who took over a second off his best time to win the final heat and qualify 1st overall for the final in 4:08.12.

The final tonight will be very intriguing, with Hagino best on the front half, Kalisz best on the back half, and Seto strong throughout. Hagino still owns the fastest time of anyone in the field at 4:07.61 from 2014.

Also in the field tonight will be Kalisz’s American teammate Jay Litherland, who qualified 4th overall, and Great Britain’s Max Litchfield who was 5th. Check out the start list for this race here.

Next up is the women’s 100 fly semis, which will be a dogfight to get into the top 8 and qualify for the final. World record holder Sarah Sjostrom of Sweden leads the pack after posting a time of 56.26 this morning. Like this morning, she’ll be right next to Canadian teenager Penny Oleksiak, who broke both the junior world and Canadian record this morning to qualify 3rd overall in 56.73. They’ll swim in the second semi, while the American duo of Dana Vollmer and Kelsi Worrell will swim in the first semi. Vollmer looked strong this morning posting the second fastest time in 56.56, while Worrell looked equally good qualifying 4th overall in 56.97.

Provided those four all get under 57 again tonight, they should be safe to move on. After them there were five women who went somewhere between 57.08 and 57.33 this morning, meaning at least one of them will be on the outside looking in for tomorrow night’s final. Check out the start lists for the women’s 100 fly semis here.

The men’s 400 free may be the best race of the night after Australian Mack Horton called out China’s Sun Yang after prelims, quoted as saying “I don’t have time for drug cheats”. Horton and Sun will swim side-by-side in lanes 5 and 6 after qualifying 2nd and 4th overall respectively.

Both looked strong in the morning with Horton posting a time of 3:43.84 and Sun 3:44.23, but it was America’s Conor Dwyer who took the top seed, posting a best time of 3:43.42. Along with them, the final is full of talent including last years 200 free World Champion James Guy, Italy’s Gabriele Detti, and Dwyer’s American teammate Connor Jaeger. Among the surprises this morning was 2012 silver medallist Park Tae Hwan failing to make the final, posting a time of 3:45.63 that put him 10th overall. Check out the start list for tonight’s final here.

Next up will be the women’s 400 IM, where Hungary’s Katinka Hosszu will be looking for her first Olympic medal, along with a world record, after swimming the 2nd fastest 400 IM in history this morning, clocking 4:28.58. She missed the world record of Ye Shiwen by just 0.15, out-splitting Shiwen’s pace on all but the freestyle legs, where she was over three seconds off. Ye Shiwen also competed in the heats this morning, swimming over 17 seconds slower than her world record and finishing 27th.

In addition to seeds 2 through 7 being separated by less than two seconds, the 8th seed, Emily Overholt, won bronze at the World Championships last year in a time of 4:32.52. She hasn’t been near that time yet this year, but the swim is recent enough that she shouldn’t be ignored by the rest of the field. Check out the start list for tonight’s final here.

The men’s 100 breast semi-finals will have everyone on world record watch, as Great Britain’s Adam Peaty will look to follow up his record setting morning swim of 57.55 up with an even faster time tonight. Though Peaty is in a league of his own and will have no problem advancing, the rest of the field will be focused on one thing: make the top eight. The field was tight this morning, with seeds 2 through 10 somewhere between 58.9 and 59.5.

Yasuhiro Koseki of Japan and Felipe Franca of Brazil both had fast swims this morning, qualifying 2nd and 3rd overall, as did Americans Kevin Cordes and Cody Miller who qualified 4th and 5th. 2012 Olympic champ Cameron van der Burgh will need to be faster than his 59.35 from this morning in order to ensure a spot in the final eight. See the start lists for the semi-finals tonight here.

The first relay final will wrap it up for night 1 of Olympic Swimming, with the women’s 400 free relay final set to go. The defending Olympic champion Australians will swim out of lane four after setting a new Olympic record this morning in 3:32.39. Cate Campbell threw down a blistering 51.80 anchor leg for the Aussies, who are set to add Emma McKeon to their lineup tonight. The official relay rosters haven’t been released yet, but it is expected that McKeon and Campbell will be joined by Cate’s sister Bronte Campbell and Brittany Elmslie, who threw down a 53.22 leg this morning.

The Australians are certainly favored, but it won’t be easy. The Americans qualified 2nd overall in 3:33.59, and are set to substitute in Abbey Weitzeil and Simone Manuel, who finished 1-2 at US Trials. They’ll likely be joined by Katie Ledecky, who split 52.64 this morning, and perhaps Amanda Weir, who led off in 53.60. Other options include Dana Vollmer, who finished 6th in this event at Trials, and Missy Franklin, who was an Olympic finalist in the 100 free in London.

The Canadians continue to improve in this event, as they broke the national record this morning despite not using Trials winner Penny Oleksiak. Oleksiak will come in tonight, along with Chantal van Landeghem (52.90) and Taylor Ruck (53.04), who were both very fast this morning, and either Michelle Williams or Sandrine Mainville.

The Netherlands, who used to own this race, qualified just 5th overall in 3:35.94, but didn’t use defending Olympic gold medallist in the 100 free Ranomi Kromowidjojo. Qualifying 4th and 6th overall were the Italians and the Swedes, who will have Federica Pellegrini and Sarah Sjostrom in their respective lineups tonight. Check out the start list for the relay final tonight here.

Hoping the gold medal tally will end in 2 for Austraia, 1 for Hungary & 1 for Japan after tonight – with some crazy 100fly & 100breast times as the icing on the cake. And expecting this comment to be downvoted in world record time… lol

Missy as an option for the relay?? on what grounds?

Too bad we didn’t see it. THANKS, NBC!