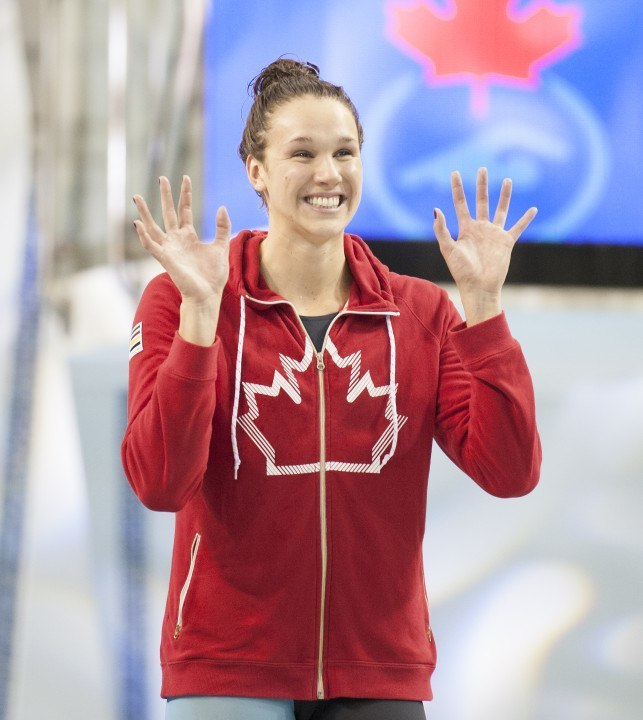 The Canadian women broke the national record in the 4x100m freestyle relay this morning en route to finishing third overall in the heats and putting themselves in a great position to medal tonight. Archive photo via Chris Tanouye/www.christanouye.com

The Canadian women broke the national record in the 4x100m freestyle relay this morning en route to finishing third overall in the heats and putting themselves in a great position to medal tonight.

Their time of 3:33.84 absolutely demolished the previous record of 3:36.44 that the Canadian squad of Sandrine Mainville, Michelle Williams, Chantal Van Landeghem, and Katerine Savard swam at the world championships last summer.

With three of the four competing on the relay this morning, they finished third overall in their heat behind the Australians and Americans who will be their main competitors tonight.

Sandrine Mainville led things off with a 54.17 before Van Landeghem dove in to give the Canadians the lead. Van Landeghem put up a very strong 52.90 split, close to a full second faster than her flat-start best time of 53.83.

Van Landeghem passed things over to Michelle Williams who dropped a 53.73 performance before young up-and-comer Taylor Ruck dove in. Ruck split a 53.04, the second fastest split by a Canadian this morning, in order to guarantee the national record.

The record was broken with the absence of 100m freestyle Canadian record holder Penny Oleksiak who will likely join the squad tonight to compete for a medal.

With Oleksiak likely joining the relay team one swimmer from the heats won’t be swimming tonight. Chantal Van Landeghem’s 52.90 secures her spot on the relay, and although Taylor Ruck didn’t beat either Mainville or Williams at trials, her 53.04 split argues that she should have a spot on that team too.

If the Canadian coaching staff give Ruck and Oleksiak spots on the relay tonight, Williams or Mainville will not be swimming.

Congratulations from all your friends in Rosenort who cheered you on via TV, and we’re all very excited for you and wish you well in the other swim competitions. Awesome. You did Canada proud.

Very, very strong swim for Taylor Ruck! I have to believe that 53.04 puts her on the team tonight. I don’t envy the choice the coaches have to make but Manville or Williams have to, in my opinion, sit out.

canadian women are killing it so far!