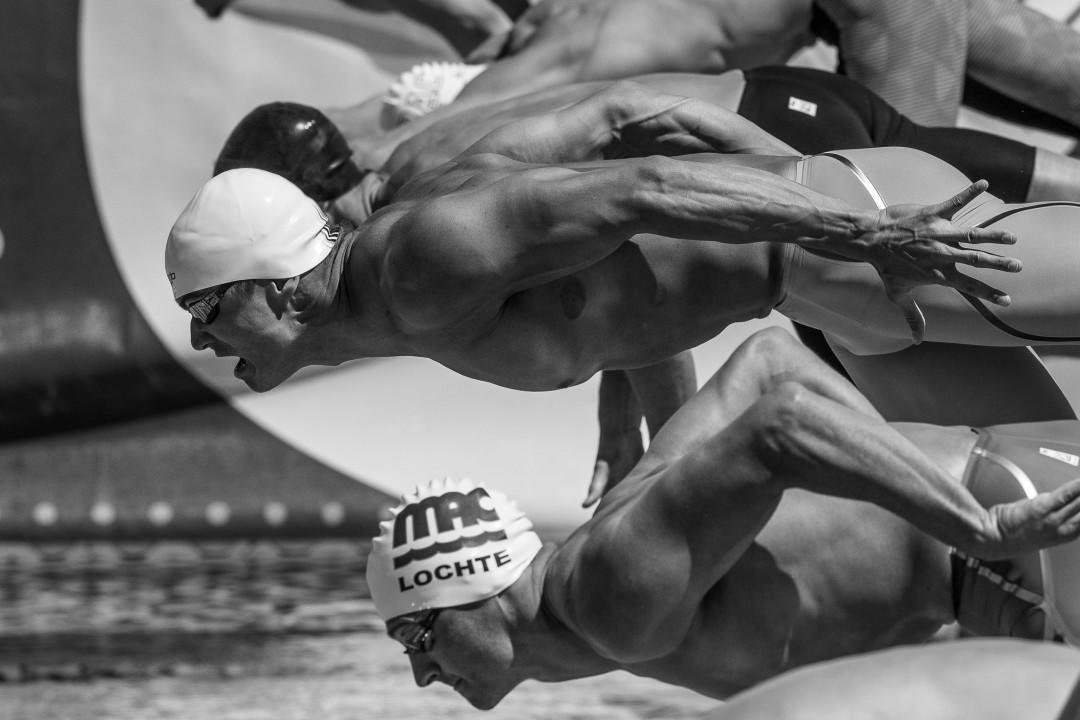 The final evening of competition of the 2016 Atlanta Classic will feature Olympians, NCAA stars, and other top swimmers squaring off in five total events. Archive photo via Mike Lewis/Ola Vista Photography

The final evening of competition of the 2016 Atlanta Classic will feature Olympians, NCAA stars, and other top swimmers squaring off in five total events.  The fastest heats of the women’s 800 free and men’s 1500 free will swim first.  (Note: Katie Ledecky is not swimming the 800 free).  In the 200 IM, Stanford’s Ella Eastin has the top seed from this morning, but will have to beat the winner of the 400 IM, Elizabeth Beisel, head-to-head, to hold that spot. A similar battle could be brewing in the men’s side, with Josh Prenot having the fastest time this morning, but Jay Litherland will be looking to sweep the individual medleys.  Tasija Karosas will swim in lane four in the women’s 200 back this evening.  On the men’s side, Jacob Pebley had this morning’s fastest time, but all eyes will be on teammate Ryan Murphy after he popped a 53.0 in the 100 back yesterday.  The meet will end with the 100 freestyles.  Ledecky, Simone Manuel, and Lia Neal will be trying to answer Dana Vollmer’s 53.59 from this morning.  The men’s race features a ton of current and former NCAA stars, including Marcelo Chierighini, who had the fastest time this morning with a 48.66, Nathan Adrian, Jack Conger, Tom Shields, Ryan Held, Townley Haas, and Caeleb Dressel.atlant

Katie Ledecky elected not to swim this race, presumably to save her energy for the 200 IM and the 100 free later on this evening, and in Ledecky’s absence, Adreina Pinto of the Gator Swim Club took the win, registering a 8:36.16 out of the final heat.  Stephanie Peters took 2nd, just over a second behind Pinto with a 8:37.59.  14 year-old Madeyln Donohoe shaved three-tenths of her lifetime best to place 3rd in 8:40.44.

Josh Prenot picked up his second win of the meet, after winning the 200 breast yesterday.  His time of 1:59.51 is his second-fastest in-season time ever, and would have placed him only about half a second behind Ryan Lochte at the Charlotte Pro Series swim going on at almost exactly the same time.  16 year-old Marton Barta of the hometown SwimAtlanta team placed 2nd here with a 2:03.80, followed by Mark Szaranek in 2:04.22.  The winner of tonight’s 1500, Sean Grieshop, placed 9th in 2:07.23.

This was the most exciting race so far this evening, with the top three finishers touching the wall separated by four-tenths of a second.  Elizabeth Beisel, swimming her second final of the evening, emerged victorious with a time of 2:12.10.  14 year-old Alex Walsh finished 2nd in 2:12.32, followed closely by Lisa Bratton in 2:12.50.

Ryan Murphy took the win tonight in 1:55.82.  The USA Swimming database would have that as the fastest time in the US this year, but Murphy went 1:54.94 at the Canadian Olympic Trials last month.  Either way, he has the fastest time among USA men this year.  California teammate Jacob Pebley took second in 1:56.66, which is also just off his time from the Canadian Olympic Trials.  Those two were the only swimmers to crack the 2-minute barrier.  3rd place went to Michael Taylor in 2:01.81.

A trio of current and future Stanford swimmers swept the top three spots in this event this evening.  First place went to Simone Manuel in 54.11.  Lia Neal took 2nd in 54.31.  Katie Ledecky, who is heading to Stanford in the fall after taking a year off, placed 3rd in 54.55.  While all three of those swimmers should be in the mix for Team USA’s 4×100 free relay, Dana Vollmer’s 53.59 from this morning in Charlotte remains the fastest time for USA swimmers this eyar.

Nathan Adrian continued swimming toward his defense of Olympic gold in this event with a win here tonight.  His time of 48.29 put him ahead of Marcelo Chierighini, who took 2nd in 48.69.  Townley Haas finished 3rd in 49.72, his fastest in-season time ever.  Haas’s Texas teammate Jack Conger tied with Tom Shields, both touching in 49.89.  Caeleb Dressel, the American and U.S. Open Record holder in the yards version of this event, finished 6th in 50.26.

I’m coming to the Atlanta live recap just to see if there’s a new world record in the 800 free and what? I read that KL doesn’t swim it. That’s not fun. 🙁
I’m going back to Charlotte.

charlotte is online on nbcliveextra

Nice drop for Eastin, her 2:10.5 beating DiRado and laying down the gauntlet for her, Levering, and the others… Leverenz only at 2:12.8 today, btw.

Yeah, Eastin, it sounds like she now has a chance to make a national team at the senior level.

Correct that auto-incorrect back to Leverenz

a great IMer in the making…i hope she will be in RIO….

Interesting tidbit about the 1500, Gemmel and Finke tied for 8th in the 400 Free prelims yesterday morning, then tied again for 7th at finals last night and in the 1500 today, they finish 0.06 seconds apart

If the live results are not going to work, why even put them there as an option. So sad.

I’m just now getting the official live results site to work, but I am still having to right-click, select “open in new window” and then hit refresh.

I know, Ledecky beat her, eh. Wonder why her 2Back hasn’t come along as much as her 4IM, too.

Assuming you’re talking about Beisel, her 200 back was the event immediately after the 200 IM, so that could’ve been a factor.

Yeah, I’m confused Lauren, I remember seeing a comment about Beisel’s 2IM progress not being up to her 4IM progress, so I was responding to that. Must have been on another thread, or deleted. Yeah you’re right, neither her 2Back nor 2IM was as fast as I expected, but given the back-to-back events on top of a monster 4IM last night, still pretty good, eh. I’m still thinking she’ll be ahead of DiRado by Trials in the 2Back, unless her injury last summer selectively affected her backstroke a little more than other strokes– I’m blanking on it but thinking it might have been a groin injury which is a killer for the 2Back.

Elizabeth isn’t really a sprinter and 200 IM is basically an all out sprint for each of the four strokes. She gets to build each 100 in the 400 IM.

Right, and the 2back is less of a “sprint” than the 2IM, which is just a training event for her. But she’s the defending Olympic bronze medalist in the 2back and while last summer she only made it down to 2:09.5, obviously due to her injury, I was thinking a sub 2:10 by now would put her on track to get past DiRado and defend her bronze. But bottom line: this was a very busy weekend for her while also coming down the homestretch of the last tough Gator training cycle before taper starts, so to me that 4:33 speaks volumes and I’m probably worried about nothing, her 2back should come around fine by next month.

By the way are you related to Ashley Neidigh? If so, she’s doing pretty good!

Ashley is my sister:) that’s interesting though that you bring up how the injury might be harder on the 200 back. I hadn’t thought about that before!

I really don’t understand what Dressel’s game plan is (I am a big fan). He goes half a second slower than Haase in the 100 free final yet his best 100 yard time is almost 1.5 sec faster. And then he swims in briefs as if not to be competitive.

He always wears briefs for in-season long course meets. In fact all Florida swimmers do. Even Lochte did when he swam for Gregg Troy. Dressel did not go fast at all during his in-season meets last summer then blasted a 21.5 tapered. It’s how Florida does it. Very high volume throughout the season with little rest. Lochte was known for much slower in season times as well years ago at Florida. But you obviously knew all this since you’re a big fan.

I agree with Markster. How do you not know that Florida is notorious for high volume in season? Several times during the year Caeleb would go 20. mid and 44 low at dual meets then drop big when it mattered. Chill out dude.

Crawler- if you go to the news list and find our videos from Gregg Troy and Caeleb’s press conference last week, Gregg talks in one of them about their emphasis on being fast on the right day, even if that means not being the fastest every day.

Swim fast when it counts the most!

Women’s 800 free
Not fun without KL

Men’s 1500 free
Pretty good time by Grieshop for right now. I presume he plans to swim that event at trials with the 400 IM. By far his 2 best events.
KL would have probably finished second. 🙂

Women’s 200 IM
Stanford 1-2 with Eastin and DiRado
I predict the same 1-2 at trials but with DiRado ahead of Eastin.

Women’s 200 back
Time is not crazy for Beisel but she swam the 200 IM just before. Overall a great in-season meet for her. The 400 IM was of course the highlight of her week.
Very good second place… Read more »