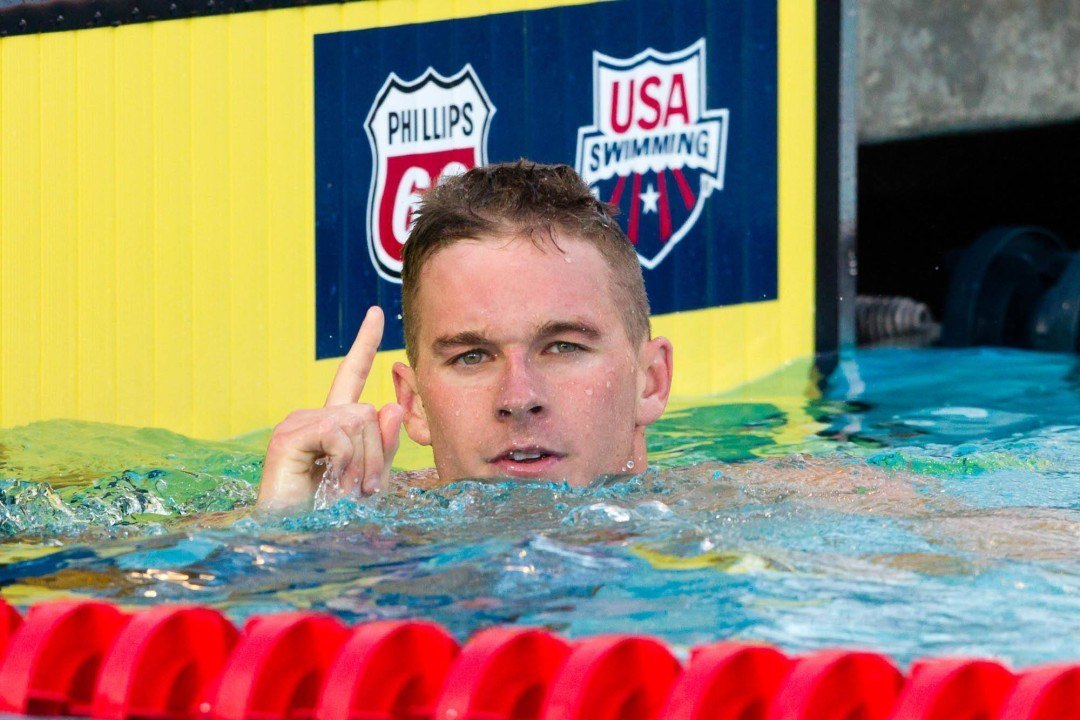 Seth Stubblefield (USA) came into the meet as the top seed in the 50 free, and he'll retain that position go into semifinals. He swam a 22.41, just .26 off his lifetime best.

The Japanese women have dominated the two longer breaststrokes in South Korea this week, but Russian Natalia Ivaneeva put her mark on the prelims session in the 50 meter breaststroke with a top-seeded 20.88. That put her just ahead of Ukraine’s Mariia Liver (30.91).

The Americans rounded out the top 8 through to the semi-finals, with Emma Reaney (31.37) and Lillia King (31.40) both pushing through for good position in the evening session.

King, 9th qualifier Fiona Doyle (31.57), and South African Tara-Lynn Nicholas (31.95) all swam out of a slow 6th heat. King was the winner of that heat but only wound up 8th overall. That indicates the potential for a big shakeup in the semi’s when the competition mixes up.

Seth Stubblefield (USA) came into the meet as the top seed in the 50 free, and he’ll retain that position go into semifinals.  He swam a 22.41, just .26 off his lifetime best.  Teammate Paul Powers won heat 10 in a time of 22.58, the 3rd-fastest time overall.  In between them sits Russian Oleg Tikhobaev, just a hair ahead of Powers at 22.57.

Japan’s Kosuke Matsui had the 4th-fastest time with a 22.62.  He was followed by Brazillian Henrique Martins (22.63), who already had two gold medals at these games.  Italy’s Giuseppe Guttuso won heat 7 with a 22.73.  He was the lowest seed to make it to semis.

Continuing a trend of teammates finishing close to each other, Luke Pendock and Douglas Erasmus of South Africa swam the same time (22.96) in consecutive heats.  Rounding out the semifinalists is Bogdan Plavin of Ukraine (22.97)

The women’s 200 fly has one of the oldest Universiade records left on the books, with Audrey Lacroix’s 2007 time of 2:06.83 still standing tall.

Nobody was close in prelims, but American Hali Flickinger has been on fire this week, and should at least put a scare into it when finals roll around.

Her immediate concern, though, is the Italian Stefania Pirozzi, as the two were separated by just .01 seconds in prelims at 2:10.21 and 2:10.22, respectively.

Pirozzi’s best time is a full second faster than Flickinger’s, but of the two, Flickinger has had by far the better meet (Pirozzi still has the World Championships to worry about later this summer).

Of that group of six, Nunn and Yabu had the fastest closing splits, so they’ll have the confidence battling for inside position to race next to the two favorites in the semi-finals.

Also making the semi-finals is Finland’s Tanja Kylliainen, who will be recognized by American fans as the defending ACC Conference Championship Swimmer of the Meet in the United States collegiate system.

The Russians haven’t been the dominant nation at these World University Games, but they had an impressive session, especially on the women’s side, where they picked up another top qualifier in the women’s 50 free.

This time, it was Rozaliya Nasretdinova, who swam a 25.28 to pace the field in prelims.

She’s the defending Youth Olympic champion in this event, and just like in the earlier 50 breaststroke, the Russians will be poetically chased by the Ukrainians, as Darya Stepanyuk touched in 25.33 and will take the middle lane in the other semi-final.

The Americans Maddie Locus (25.46) and Abbey Weitzeil (25.57) qualified 5th and 7th, respectively, though both will be expected under 25 seconds in later rounds, as they’ve both done it already.

One of the biggest stories of the meet has been the absolute dominance of USA relays.  So far, the Americans have three golds out of three relays, and once again, they’ll have lane four tonight as they go for their fourth relay gold.

We won’t know relay lineups for sure until this evening, but the USA finals squad should be much different, and much faster, than the team from prelims.  Reed Malone and Clay Youngquist, the individual 200 free gold and bronze medalists, respectively, and Michael Wynalda, whose lifetime best in the 200 free is actually faster than Youngquist’s, are all very likely to swim tonight.  Meanwhile, Japan had both of their individual 200 free swimmers, Ehara and Sakata, on the morning’s relay.

Martina Caramignoli Italy 8:35.54 already has won one individual gold medal at this meet in the the 1500, and she’ll be looking for her second tomorrow evening after taking the top seed out of prelims with a 8:35.54.  Fellow Italian Martina de Memme, a medalist in the 400 free earlier this week, won heat 2 in 8:38.39.

Kiah Melverton of Australia will go into finals as the 3rd-seed after swimming a 8:42.17.  She’ll be followed by both American representatives, Kathryn Campbell (8:43.71) and Lindsay Vrooman US (8:44.93).  Melverton picked up the bronze in the 1500 earlier in the week, and Vrooman was the silver medalist in both the 400 and the 1500.

I really hope they put Jack on that relay tonight. Would love to see him throw down a big one.

0
0
Reply
ERVINFORTHEWIN
Reply to  Swimmer A

Would be a great line up : Conger , Malone , Youngquist and Wynalda !!!!