Katie Hoff out of competition for summer after surgery 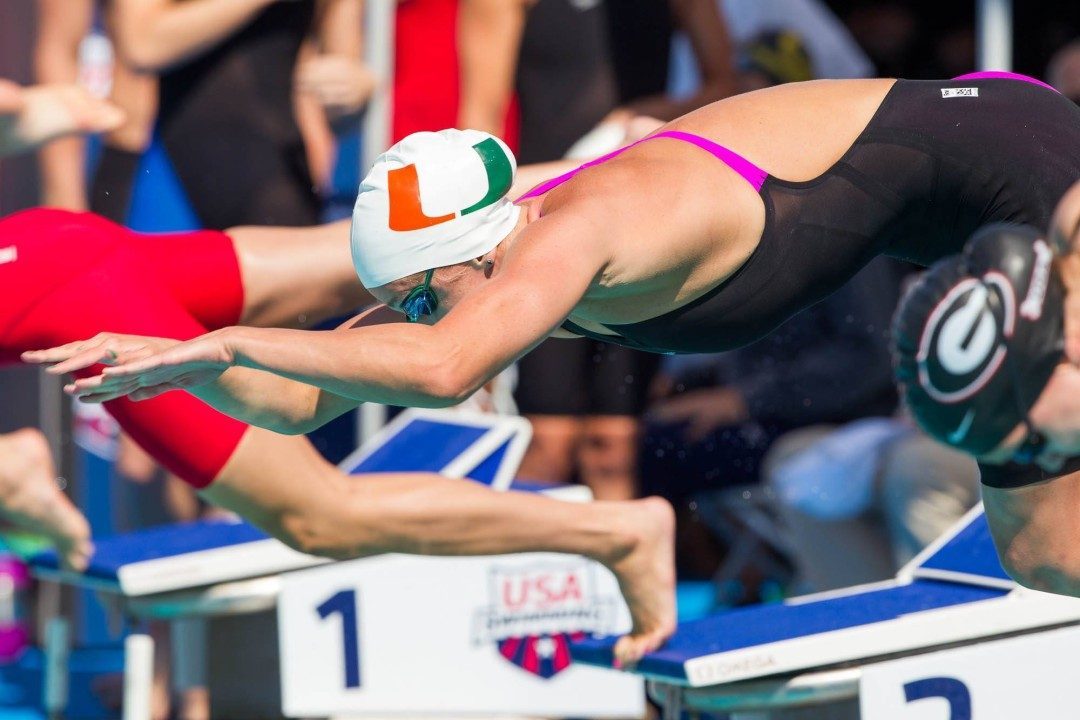 FINA released its 2021 reform report in early October and while the International Swimmers’ Alliance “welcomes” it, they say it lacks athlete involvement.

Olympic medalist Katie Hoff’s summer season has come to a close after surgery.

Hoff says she required surgery last month for an enlarged gland in her chest, and that recovery from the surgery will keep her out of U.S. Nationals next month.

This isn’t the first medical setback for Hoff in her comeback bid. The U.S. Olympian has had an ongoing struggle with blood clots in her lungs, a condition that is worsened by long-distance air travel. Hoff was starting to heat up last summer before the clots forced her to scratch most of her events at U.S. Nationals in Irvine, CA.

At the time, her symptoms were attributed to an “intercostal strain,” but a few months later, Hoff announced that she had learned that they were due to two blood clots in her chest.

“As a precaution, I have been advised to avoid international air travel for the time being,” Hoff said at the time.

She was forced to drop off the U.S.’s Short Course World Championships team in December, but was healthy enough to travel to the Arena Pro Swim stops in Orlando and Mesa earlier this year. Hoff trains out of Miami, Florida, so the Orlando trip wasn’t an overly long one, but the trip to Mesa spanned most of the country.

But for the second-straight year, Hoff’s hopes at U.S. Nationals will be sidetracked by another medical setback. Hoff said she will not compete at Nationals, but also provided SwimSwam a statement saying that she is already back in the water and hoping to get back into competition as soon as possible.

“I remain hopeful and committed to regaining my competitive form as soon as possible,” her statement said. “I am back in the water swimming, progressing steadily and doing whatever is necessary to recover in the best way for my health.”

Hoff is a 2008 Olympian who missed the 2012 Olympics and took a break from the sport in 2013. Her comeback run has looked great when she’s been in the pool, and if she can overcome the run of medical issues, she’ll be a candidate for the U.S. team at next summer’s Olympic Trials.

Daw, that sucks, was excited about how well she was swimming over the last year or so.

BUT…uh oh, you guys. I was just gonna write how crappy it is that a freak thing like blood clots is slowing her down, not a “usual” injury like, I dunno, a blown out shoulder…

…but could these clots be related to PED use? Feel like it’s something EPO would contribute to, maybe something else would do it, too.

And it’s not that I’m opposed to PED use – I’d advocate everything be legalized and I already assume everybody’s on something – this just seems fishy, ya know? Like, it’s not hard to put together a compelling story.

I’ve already downvoted myself for even making this comment.

Could be nothing more than DVT, which causes blood clots. Many people who repeatedly fly long distances and don’t walk around or wear compression socks during the flight, wind up with DVT. It is a killer if not caught early enough.

Kind of unusual for someone her age. It means she has too much fibrin (blood protein responsible for clotting) in he blood. The sad thing is, it could be reversed by taking a fibrocytic enzyme such as serrapeptase, or nattokinase — both readily available from any health food store– but no Dr. will probably ever be up on that, or tell her that. They will probably prescribe a harsh and dangerous blood thinner. If anybody who reads this knows her, please tell her to research these enzymes.

Thanks for the info. Too much blood thinner = stroke? Not enough = heart attack I think that is how the equation works.

It must be terrible for such a young person to experience these issues, which if not treated properly, will follow her throughout her life.

She trains at a local pool here in Miami. I don’t think that any of us has the intestinal fortitude to speak with her about her medical issues. Someone pointed out that she looks like she lost alot of weight; maybe that was due to the surgery.

pardon me- I meant to write “fibrolytic” not “fibrocytic”.

I had the same issue with clots. 4 in my lungs. 2 in my thigh. The ones in my lungs almost killed me, had I not woke up minutes before it got me. 5 days in ICU. Found out my body quit making my natural blood thinner. Now on blood thinners for the rest of my life.

Poor Katie. 😥
She is really not spared.
That’s unfair.
Be healthy quickly and come back stronger for olympic trials.

Given that she’s a female of reproductive age, birth control is a more likely cause. The estrogen can more than double your risk for clotting.

Given that she’s a female of reproductive age, birth control meds are a more likely cause of clotting; but can’t rule out congenital causes either. Estrogens can more than double your risk for clots.