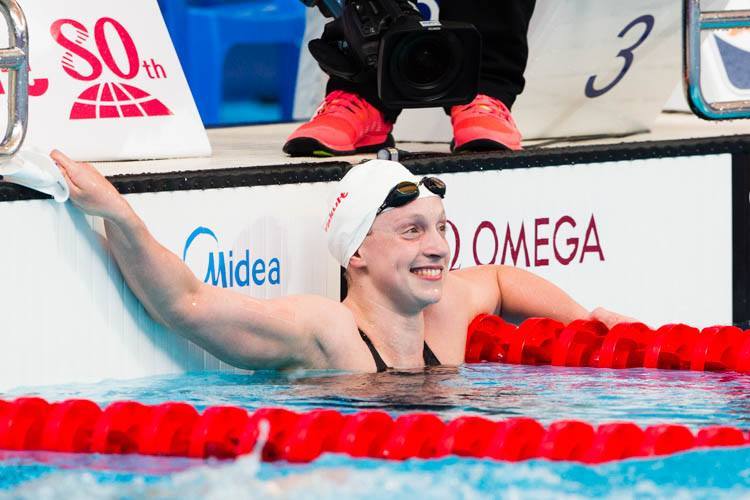 Katie Ledecky earns the Swammy Award for Person of the Year for the way she's expanded what swimming fans thought possible in the freestyle races, both in terms of range and historic time barriers. Archive photo via Tim Binning/TheSwimPictures.com

There’s no denying that Katie Ledecky had the biggest impact on the sport compared to any other athlete during the 2014-15 season.

With countless wins, world records, and American records, Ledecky earns the Swammy award for Person of the Year for the way she’s expanded what swimming fans thought possible in the freestyle races, both in terms of range and historic time barriers.

In her senior year of high school, Ledecky accomplished a lot more than others can ever hope of accomplishing in her career. She broke her first major record of the 2014-2015 season in late December, dropping a 15:13.30 in the 1650 freestyle at the 2014 US Winter Nationals.

That time for Ledecky bettered her 15:15.17 mark that she set in 2013, and made her the first female swimmer to ever go under 15:15 in the 1650 freestyle. With much of the season remaining, Ledecky was already proving to the world that she was untouchable in distance freestyle.

Her first record breaking performance of 2015 was on February 6; the last high school swim meet of her career. Ledecky clocked in a wicked 4:26.58 in prelims to break her own American record in the event, and set herself up for the win. Ending off her high school career on an American record, Ledecky began to prepare for the 2015 World Championships, a meet which would solidify her name as one of the best distance swimmers of all time.

Until the World Championships in Kazan, Russia, Ledecky kept quiet. While keeping quiet for most people means struggling to get close to season best times, Ledecky was still motoring through with some of the fastest times in history at in-season competitions. With a full rest, she looked to be unbeatable in Kazan.

Unbeatable she was. Ledecky went a perfect five for five in Kazan continuing her streak of being undefeated in international finals throughout her entire career.

Ledecky managed wins in the 200, 400, 800, and 1500m freestyle events to become the first female swimmer to ever win four individual freestyle gold medals at either a world championships or Olympic Games.

In the 400m freestyle she remained consistant with a 3:58, but it was the 200m freestyle that was the biggest struggle for Ledecky. She battled world record holder Federica Pellegrini and Missy Franklin to the wall, ultimately winning the race with a 1:55.16. While that time isn’t as historically dominant as her other wins, Ledecky’s sweeping of the 200- through 1500-meter races represents world dominance over an almost unheard-of range of distances.

Add in a gold medal from the women’s 4x200m freestyle relay and Ledecky took home a grand total of five gold medals.

After some calm from Ledecky following the World Championships, she managed to set a new American record in the 1000 freestyle, becoming the first woman ever to dip under nine minutes in the race. With a time of 8:59.65 at the Nation’s Capital Swim Club Invite, Ledecky broke Katie Hoff’s 9:10.77 from 2007 and capped off 2015 with an incredible performance.

With all the firsts Ledecky has brought to the sport of swimming, the historic barriers she’s smashed through and the way she has transcended the typically limited distance swimmer mold, Ledecky earns the Swammy Award for person of the year.

“Ledecky began to prepare for the 2015 World Championships, a meet which would arguably solidify her name as one of the best distance swimmers of all time.”

We need to wait for her second Olympics, also her second, third, fourth Olympics gold.

I suppose that’s true, since the Olympics are a whole different game. My point was that there is nothing arguable about her being one of the best distance swimmers. The only arguable part is her being THE best.

How many categories of awards do you have? 😆
You will have to write again the same article for world female swimmer of the year. 🙂

And KL is already the greatest female freestyler of all time.
She will finally convince the cranky fans next year in Rio.

That 200IM from Hosszu was insane.Some people were telling me it would be ’20 years’ to beat Kukors record.Twenty years never passed so fast…We have to put Ledecky 800free in perspective because many good swimmers don’t pay attention for this event.

Not saying Hosszu and Sjostrom’s aren’t good enough, both are impressive swim. I just wondering who start saying Kukors’s record was unbeatable?
Clearly Zige’s 200 Fly is more insane.
Someday in the future, when a girl beat Zige’s record, it can be THE SWIM OF THE YEAR, without a doubt. (or maybe THE SWIM OF A DECADE)

GI, as you saw Kukor’s record was beatable 🙂