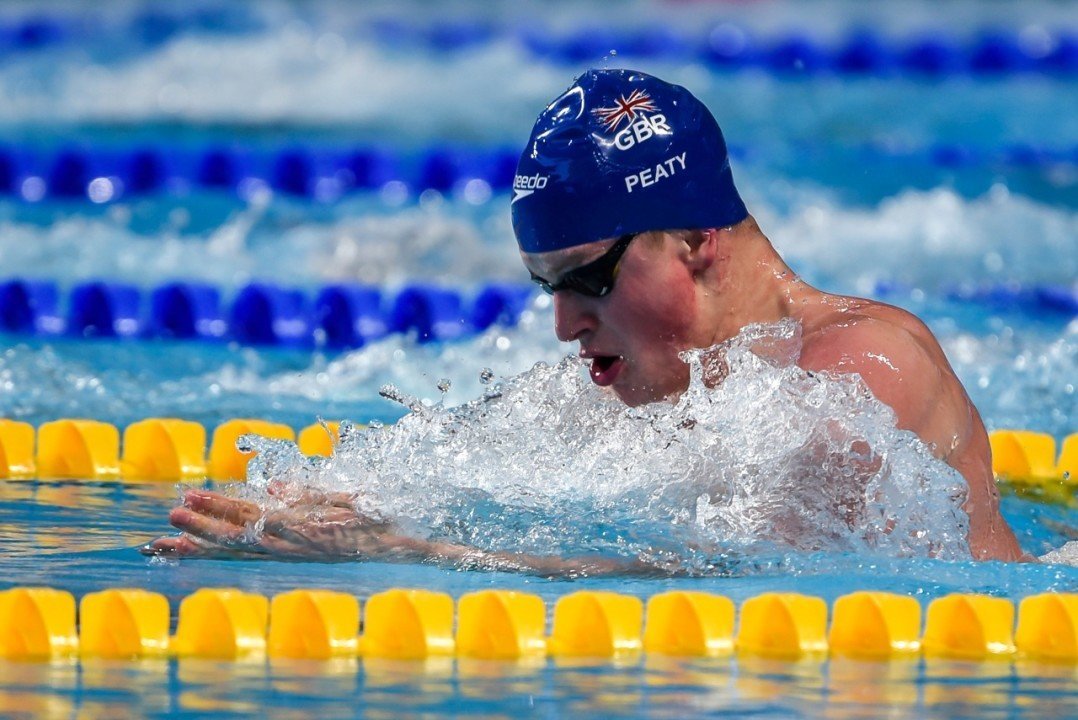 Adam Peaty broke a major swimming barrier this year in April at the British Championships in London, where he shattered the 100m breaststroke world record by over half a second, becoming the first man ever under 58 seconds in 57.92. Archive photo via Peter Sukenik/www.petersukenik.com

This wasn’t Peaty’s first world record, as he broke the 50 breaststroke world record last year at the European Championships, but this swim sent shockwaves through the swimming world. He had yet to truly prove himself against the worlds very best, and he did just that this summer at the World Championships. Peaty triumphed in what became a marquee duel between him and defending 100m Olympic champion and former world record holder Cameron van der Burgh. Peaty scored wins in the 50 (26.51) and 100 (58.52), just ahead of van der Burgh in both. He also lowered his own world record in the 50m in the semi-finals (26.42), after van der Burgh had tied Peaty’s mark of 26.62 from last year in the heats. Peaty earned a third gold medal in the mixed medley relay.

Peaty’s mark of 57.92 has raised the bar for breaststrokers significantly, giving everyone a new mark to shoot for heading into the Olympic year.

After going through all that he did in late 2014/early 2015, it is safe to say the most decorated Olympian in history exceeded everyones expectations this summer at the U.S. National Championships. Phelps made it clear that he was back and better than ever (at least since 2008), posting three world-leading times in the 100/200 fly and 200 IM. Phelps also took home the same three U.S. Winter National titles earlier in December. With a budding rivarly with 2012 200 fly Olympic champ Chad Le Clos, it is safe to say the best is yet to come from the new and improved Michael Phelps.

China’s Sun Yang continued his distance freestyle legacy in 2015, defending both his 400 and 800 freestyle world titles from 2013. Sun also earned a silver medal in the 200 free. He did not, however, defend his world title in the 1500 free, one that he won in 2011 and 2013, and is the defending Olympic champion. Despite his mysterious no-show for the 1500 final, Sun remains a top threat in three Olympic events heading into next year. After budding distance star Gregorio Paltrinieri won the world title and then recently broke Grant Hackett’s 14-year-old short course 1500 world record, it is safe to say the potential 1500 Olympic battle could be epic (if Sun shows up, of course).

After breaking out in 2014 with three individual medals at the Commonwealth Games, Australian backstroker Mitch Larkin firmly asserted himself as the best backstroker in the world

In 2015, claiming World Championship titles in the 100 and 200 backstroke. Larkin also won a silver medal on the Australian medley relay, and just missed another with a 4th place finish in the 50 back. His success didn’t stop there, as he dominated the World Cup meets he attended, including throwing down world-leading times at the Dubai stop in the 100 (52.11) and 200 (1:53.17). It is safe to say Aaron Peirsol‘s world records of 51.94 and 1:51.92 should be on high alert heading into 2016. Larkin put the cherry on top of his year with a sweep of the backstroke events at the Aussie short course nationals, including a new world record in the 200 (1:45.63).

Much more open award on the men’s side but I agree about Peaty as winner.
You will just have to explain to me how it is possible you name him world swimmer of the year and not European swimmer of the year a few days ago (you gave it to Paltrinieri).
Maybe I didn’t understand the process or the joke but . . . it seems pretty weird.
It’s as if a rookie in NBA was named MVP of the season but not rookie of the year. 🙄

I loved the Paltrinieri pick for European Swimmer of the year, even if it was a little tongue in cheek. Can’t argue with Peaty as World swimmer of the year, as the facts support it. Maybe the joke is a forward looking one, where swimswam is predicting an Out vote at the pending EU In/Out referendum.

Is it possible that Swimswam just thought better of giving the same person both awards? Like at awards ceremonies, you can’t win best actor and best supporting actor for the same role, because it’s a play on semantics.

As for the referendum, Britain won’t leave if under 25s turn out to vote in good numbers as anticipated. Support for EU is about 65-70% in that age group. That doesn’t mean they like the EU, most absolutely hate it, but it’s seen as the lesser of two-evils and a ‘safer’ future.

But it’s not very important! 😆

bobo – it’s a fair point to bring up. Basically, in our opinion, the two were almost in a dead heat, but Paltrinieri swam better at the European Championships, which gave him the European Swimmer of the Year honor, while Peaty broke his WR at the World Championships. That was the difference for us.

Just think of how good he’ll be when he figures out how to do a pull out. He’ll be unstoppable

Phelps succeeded swimming one event in prelims and one in finals at US nationals for a total of 8 swims. At Rio, the number of swims he will need to do will increase to probably 12 and they will require more effort. Will he be able to handle it at his age?