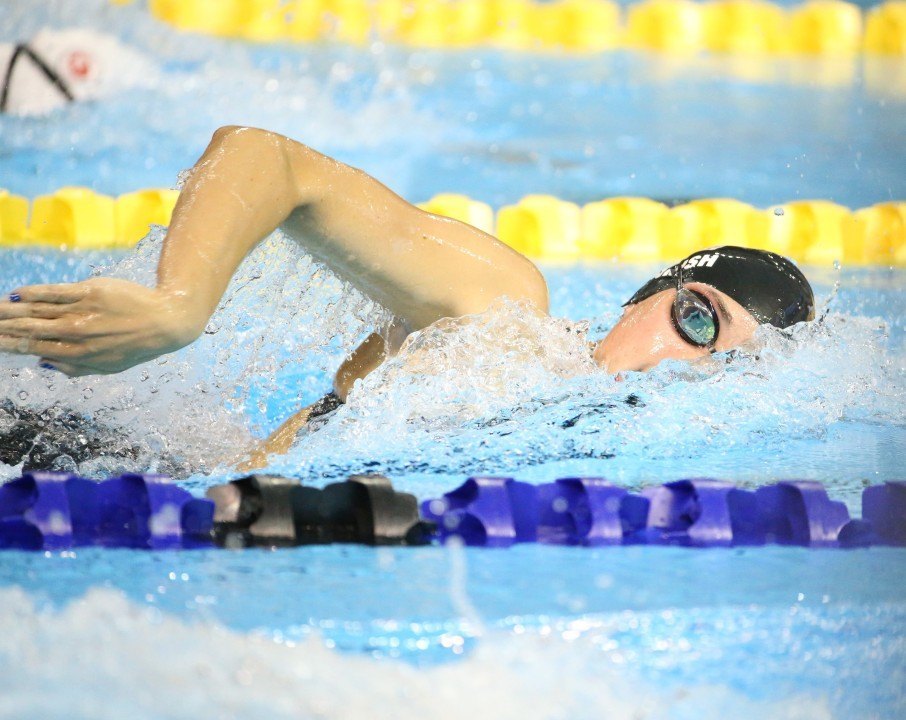 It may sound like a broken record, given that Courtney Harnish and Michael Andrew were our picks last year for the 13-14 age group, but no one else established themselves in 2015 in a more all-around fashion in the 15-16 age category than these two swimmers.

Harnish continued her steady domination of her peer group throughout 2015. She began with a stellar performance at YMCA National Short Course Championships in Greensboro, North Carolina, where she won every individual event she entered (200/500/1000y free, and 200y fly) and set meet records in the 200y free, 200y back, and 200y fly.

Harnish then went on to represent the USA internationally at the 2015 Pan American Games in July, competing in the 800m free and contributing to Team USA’s gold medal and meet record in the 4x200m free relay, splitting a 1:59.6 for her first time under 2:00 in the long course pool. From there Harnish swam at U.S. Nationals in San Antonio. She went lifetime-bests in the 200/400m free and 100/200m fly, and finished on the podium in the 400 free. Her performance led to an invitation to represent the U.S. National Junior Team at FINA World Cup events in Doha and Dubai.

Margaret Aroesty – Long Island Aquatic Club (NY): Aroesty had an enormous year in 2015, dropping mind-blowing amounts of time in her best events: nearly 5 seconds in the 100m breast, 7.5 in the 200m breast, 5 in the 200m IM, and just over 16 in the 400m IM. She made 2016 Olympic Trials in all four events. In short course season, Aroesty improved similarly, and is now the seventh-fastest 15-16 100y breaststroker of all-time, just .01 from breaking the 1-minute barrier.

Cassidy Bayer – Nation’s Capital Swim Club (MD): Bayer continued to improve in her best events this year, including the 100 and 200 butterflies, both short course and long course. Bayer represented Team USA at the FINA Junior World Championships, where she just missed the podium in the 100m fly after a field-leading lifetime-best in prelims, and a number two time in semi-finals. Bayer finished at or near the top of her age group in the 100/200y fly, 100/200m fly, 200y IM, and 200/400m IM. She is qualified for 2016 Trials in 100/200m fly and 200/400m IM.

Andrew has earned the SOY award for his age group in each of the last three years. We have watched him grow, both physically and as an athlete, and continue to be astounded at the list of his accomplishments. During the 2015 calendar year, Andrew continued his assault on the NAG record books, finishing with the 50y free, 100 breast, 100 fly, and 200 IM in short course yards and the 50 free, 100 breast, and 100 fly in long course meters.

Although he broke many of these NAG records several times throughout the year, here is where they stand at year-end 2015:

While he has another four months to continue to etch his name in the books, 2016 is an Olympic year. If Andrew is focused on making the U.S. Team for Rio, he can’t swim every single event at Trials. He showed at Junior Worlds that while he’s got incredible versatility, there is a limit to the number of events he can swim and still race at the top of his game. At Trials it won’t be just age group records he’s racing against; he will be up against the Big Boys. Having turned pro at such a young age, there are already huge expectations of him. It’s hard to remember he will just have turned 17 when he races at his first Olympic Trials in July.

Grieshop, too, overshadowed his very successful 2014 with an even better 2015. He punctuated the year with Swimmer of the Meet honors at Winter Juniors West, where he won the 200/500/1650y free, and 400y IM, and was runner-up in the 200y breast and 200y IM. At Summer Nationals, he was 18-and-under champion in the 200m IM and 400m IM, and made the podium in the latter. Grieshop went on to represent Team USA at the FINA Junior World Championships in Singapore, where he won the men’s 400m IM on the very first night.

I would have put Reece Whitley as runner up on the boys’ side.

And I can’t believe you forgot the name of Eva Merrell on the girls’ side! My pick for that award.
She’s the current 15/16 US girl with the most potential in my opinion. Clearly a future 100 fly star in the making. She’s now ahead of Cassidy Bayer in that event. At 15 she swam 51.98 last May in yards and especially 58.58 at last US winter nationals in long course! Fastest 15-year-old US girl ever in that event. And 2nd fastest 15/16 US girl ever behind the legend Mary T. Meagher who swam 57.93 in 1981, a world record crushed at that time which has… Read more »

Fair point, but Merrell didn’t even break that 1:00 barrier in the 100 fly until Winter Nationals, which wasn’t until December. Harnish had a full year of top-10 onslaught. I agree that Merrell deserves at least a mention though, 58.5 is a great time that definitely puts her in the conversation as a Trials finalist.

A great debate is whether Cassidy Bayer or Eva Merrell, the 15-16 butterfly queens, has more Olympic potential. I think both have a distinct chance this coming year and very good odds if they continue performing well for Tokyo.

Well deserved award for Andrew.His 50 free is near as fast as Cielo at…nineteen(22.32)!His 100breast is in another league comparing with Adam Peaty at the same age(1:04.01).Peaty only got faster than him at nineteen(59.92)!And his 100 fly and 200IM are very impressive.What a range of events!

How in the world does Ryan Hoffer not even get in honorable mention?!? His 100 free broke the pool record at UT and would’ve won NCAA’s last year, not to mention it was the second fastest American swim in HISTORY! He also dominated junior’s yet again by winning the 50 free, 100 fly, and 100 back.

Sam. Next time read the heading of the award. Swimmer of the year for 15 – 16.
Ryan Hoffer is 17 and will obviously be featured when that age group comes up.

Sam,
Pretty sure Hoffer is 17.

Hi Sam – everything you just mentioned happened when Ryan was 17. Like most swimmers, he had a birthday this year, and generally speaking we only recognize a swimmer in one age group per year, unless they went on a nuts tear and break NAG records in two age groups in the same year.

I’m an idiot my bad whoops I forgot