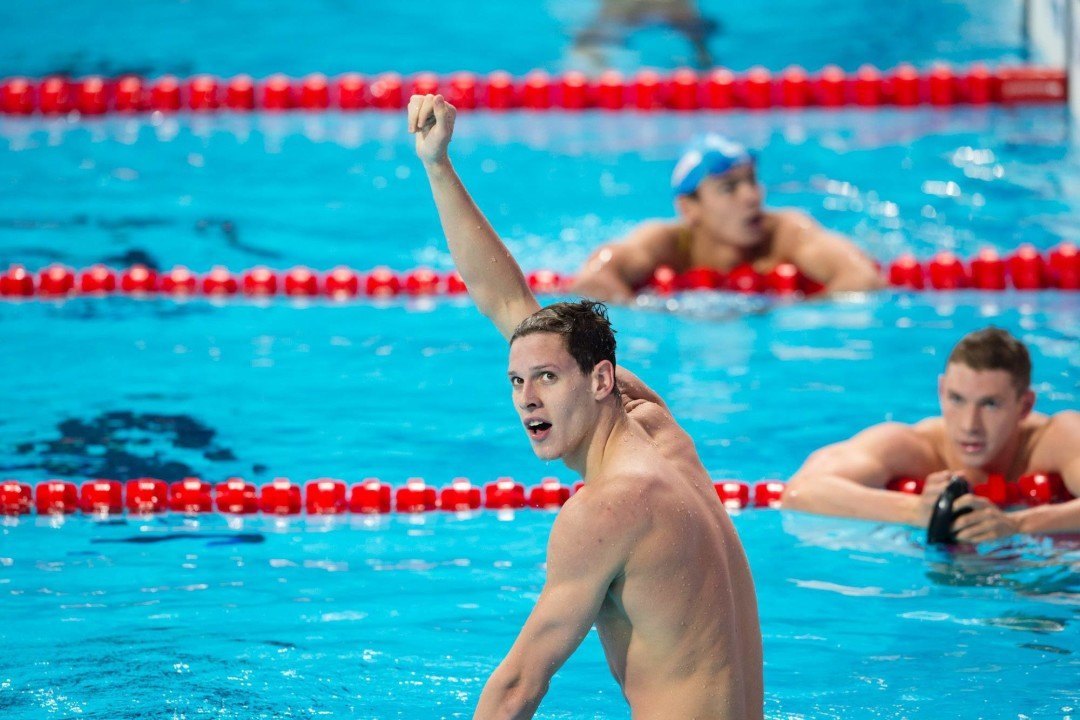 ﻿Mitch Larkin﻿ claims his second Swammy Award of 2015 near the conclusion of an unstoppable year for the Australian. Current photo via Tim Binning/TheSwimPictures.com

Australian Mitch Larkin has had one of the finest twelve month periods of any backstroke swimmer in history, claiming two World Championships titles and a world record en route to closing his year.

Larkin began his breakout into elite company in 2014 with a victory at the Commonwealth Games in the 200 back, as well as two silvers in the 50 and 100 distances. He continued his steep rise in 2015, kicking off his year with two gold medals at the World Championships in Kazan. Larkin’s time of 52.40 in the 100 back beat out Frenchman Camille Lacourt by a mere eight hundredths of a second and also was enough to hold off Olympic and World champion Matt Grevers. In the 200 discipline, he absolutely blew out the field, winning the event by nearly a full second in 1:53.58 over Poland’s Radoslaw Kawecki.

Larkin then followed up his World Champs success by dominating the backstroke events on the World Cup circuit. Despite only competing in three of the eight World Cup stops, he managed to place third in the overall rankings. By the conclusion of the Dubai stop, Larkin had lowered his best times in the 100 and 200 backstrokes to 52.11 and 1:53.17, solidifying new Australian and Commonwealth records in both. In fact, both swims move him up to the second fastest textile swimmer in history, trailing American backstroke legends Matt Grevers in the 100 and Ryan Lochte in the 200 – not too shabby for someone who had never broken 53 and 1:55 a year prior.

Larkin closed out his year in November at the Australian Short Course Championships where he managed to sweep all three backstroke events, complete with a new World Record in the 200 meter distance. His time of 1:45.63 took down Arkady Vyatchanin’s super-suited record of 1:46.11. Larkin’s time of 49.04 in the 100 boosted him up to the fifth fastest performer in history, trailing Matt Grevers’ newly established World Record by twelve hundredths of a second.