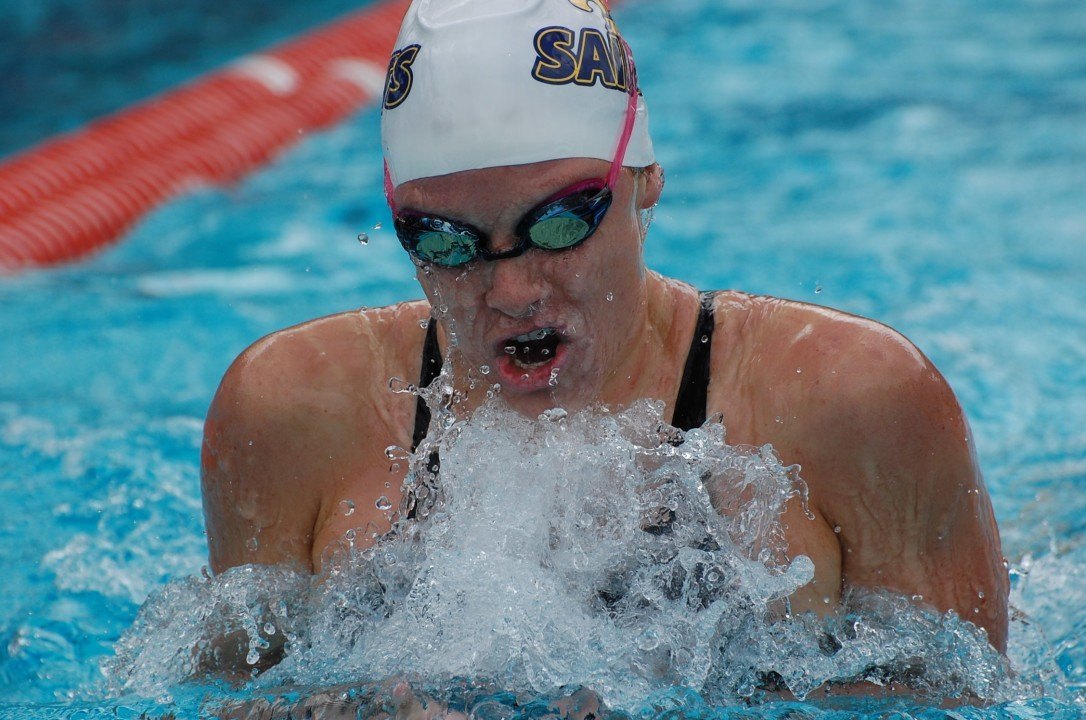 Ella Eastin is the top qualifier in the 200 IM and second in the 100 breast. She is only 1/10 off the national high school record in the IM, heading into Saturday's finals.

For the first time in history the 10 sections of the California Interscholastic Federation have come together to contest a state meet. The inaugural CIF state swimming and diving championships began on Friday, May 22 with the finals of girls’ diving and the prelims of girls’ and boys’ swimming. The finals take place on Saturday, May 22.

Despite the many absences, there were some excellent races in prelims, setting up several finals to pay attention to.

In the 200 IM, despite a cut hand, Ella Eastin of Crean Lutheran put up the top qualifying time of 1:58.44. Dan Albano at the Orange County Register reported that Eastin cut her hand last Sunday and received stitches; she has been training with a glove on all week. Nonetheless, Eastin was the top qualifier in the 200 IM and second in the 100 breast (1:02.11).

The 100 fly should be an excellent race, featuring some of California’s strongest butterfliers: Santa Clara’s Sophie Krivokapic-Zhou (53.67), Brittany Usinger of Acalanes (53.84), and Amy Okada of Beverly Hills (54.02).

There was very little margin of error to make the championship final in the boys’ 100 breast. San Ramon junior Hank Poppe and senior Tyler Lin of Corona del Mar tied for first with 55.03, while the rest of the qualifiers for the “A” final all came in under 56.7.

Huge time drops from swimmers and teams in Division Two!

Seriously! Crean Lutheran had 4 individual top 3 placements and the #1 4×100 Free Relay in prelims! I knew Ella Eastin would do well, but they actually have some depth. I didn’t expect that.

They are an absolute powerhouse, at the Division 2 championships, they had great swimmers in every event and the depth to pair with it. Another shock for me was Arroyo Grande Boys 4×50 free relay, after dropping nearly a second at the Div 2 championships, they’re continuing to improve, and leading the Division 2 teams in that event with All American Consideration. And of course, watch out for Valente tomorrow 😉

I don’t think these records will be reset today, although their times will be close. This has been a long high school season that should have ended weeks ago and most of these swimmers would rather be swimming long course. I’m sure there’s going to be great swims today not just from Eastin and Valente but from CCS and NCS

…but also great swims from CCS and NCS swimmers. (I’m not sure how to edit a prematurely posted comment! ☺️ Obviously not a frequent swimswam commentator.)

It looks like it was an exciting event! Despite being such a small achool, Crean Lutheran came in second by only 10 pts to Jserra, almost winning the CA title! Ella Eastin didn’t break Knutson’s/Hoff’s records, but she won 2 individual and played a part in 2 relay state records! 🙂

I like the CIF state meet very much. But what needs to be address is the sand bagging in the relays. This is not the Olympics and relay qualifiers should be the same team in the finals.

Did you see the Girls 200 Medley relay final heat the 8th place seat won by dropping over 4 seconds. They did this by swapping out the breast stoker with Eastin and bringing in a faster flyer. These high school teams can not bring everyone to the State meet or have tons of swimmers that individual qualify in events to do this like they have in Olympics.