Maya DiRado earned shares of two wins on a night when some of the top California-based postgrads clashed at the Speedo Grand Challenge. Archive photo via Paul Younan 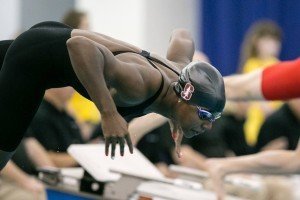 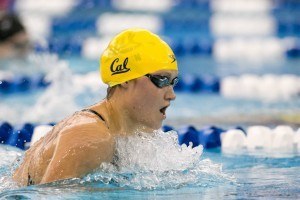 DiRado kicked off her night tying for the 200 IM title with Cal’s Caitlin Leverenz. DiRado, the former Stanford standout, trailed Leverenz on fly but took over on the backstroke leg. In true back-and-forth fashion, Leverenz pulled out to a lead of about a full second on breaststroke, but DiRado’s furious 30.1 anchor leg brought her back to tie the Cal Olympian. Both women went 2:11.57.

DiRado would come back later on to win the 400 free handily. She was 4:13.06 to top Trojan’s Tristin Baxter.

Hardy also took third in the 50 free behind two Stanford Cardinal stars. Simone Manuel was the runaway winner in 25.53, and Felicia Lee was second in 25.92, just .06 ahead of Hardy.

There were also a number of age group races swum for kids age 7-12. Perhaps most exciting was the boys 50 breast, which came down to just a single hundredth between Jeffrey Keppler and Alex Borjal. Keppler won in 36.37, with Borjal going 36.38. Borjal would go on to win the 100 back in 1:09.23.

For those like me who don’t use Meet Mobile, the traditional live results are still very useful. Long live to them. 🙂
http://www.socalswim.org/live-results/2015-Grand-Challenge

Nice double for Miss DiRado.
Farida Osman had the fastest 50 free time of the day in 25.50 but she swam it in the Consolation final.