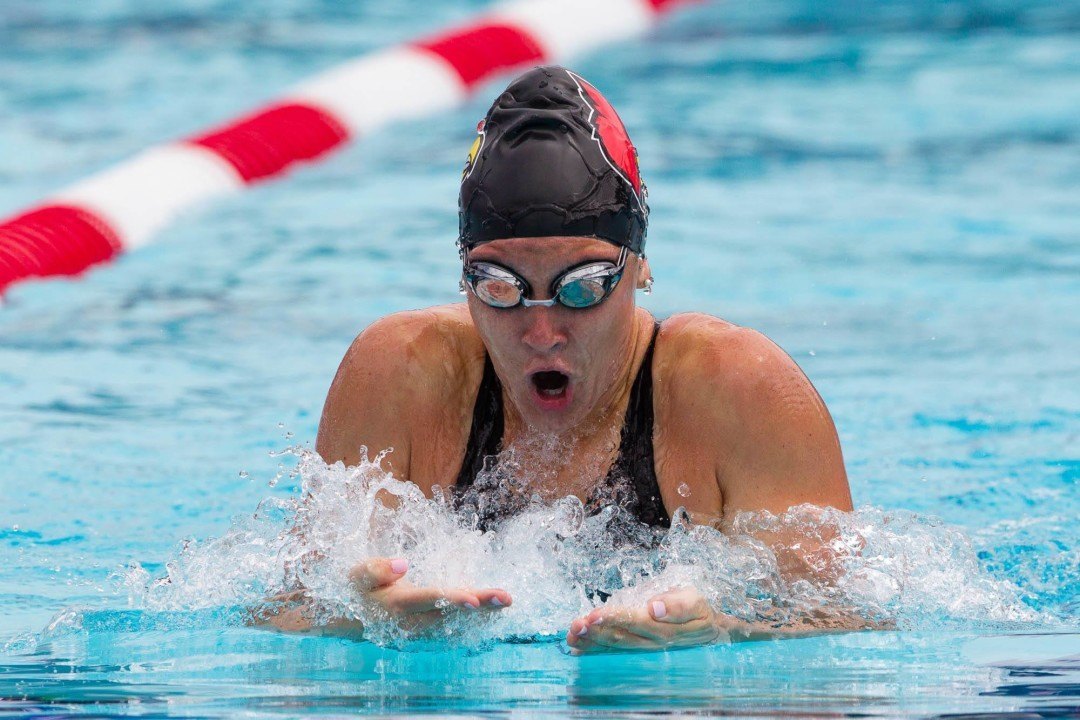 Louisville isn't #1, but Andee Cottrell and the Cardinals look to be in a good position as we approach November. Archive photo via Tim Binning/TheSwimPictures.com

Welcome to our first version of the 2015-16 NCAA Women’s Power Rankings, where, throughout the season, we’re looking to highlight each of the NCAA’s top 20 teams.  It’s (very) early in the year, so these rankings are a mix of both how the teams have looked so far, and, ultimately, the team’s end-of-season prospects.

In addition, here’s some other factors we considered (these haven’t changed from last season):

Not too much to read into so far; we’re only one meet in, and it was an outdoor long course invitational.  The Wolverines bring back almost all of their key personnel from one of their best team runs in years last season.

We never like to read too much into the SMU Classic, where the Bruins tied the next team on our list for second place.  Teams have a tendency to get up and swim abnormally fast at that meet.  Still, it’s hard to ignore Linnea Mack dropping a 52.9 100 back and freshman Caroline McTaggart putting up a 48.6 100 free.

Missouri gets the nod over UCLA with more returning NCAA scoring talent.  Dani Barbiera is a big loss, but the other three legs of their fourth place NCAA 400 medley relay (Hannah Stevens, Abby Duncan, and Anna Patterson) are all off to great starts.

The Tar Heel women had a tough NCAA Championship meet last year, but with a young nucleus and a hot start to the fall recruiting season (along with taking Georgia to the final relay last weekend), the program is on their way back up toward the top 15.

Minnesota has had two nail-biters to open the season, with a tie against Florida and a two-point loss to rival Wisconsin.  Plenty of talent on this squad, but Kierra Smith (redshirt) was missed in both meets.

Don’t be shocked to see Florida this low early on; it’s that time of year for the Gators.  They’ll rise up soon enough.  That being said, there were a number of red flags in their meets against Indiana (loss), Texas (loss), and Minnesota (tie).

Chase Kinney has stepped up to fill in for the graduation of Ivy Martin, including 22.0 and 48.6 splits against Minnesota in the Badgers’ season-opening win.

The Hoosiers are without Brooklynn Snodgrass (redshirting), but they do finally have breaststrokers, thanks to freshmen Lilly King and Miranda Tucker.

The Wildcats haven’t competed yet this season; we’ll see their top-flight freshmen class for the first time this weekend against UNLV and Washington State.

They’ve only had one meet, but it may be the best early-season Auburn has looked in years.  The Tigers drubbed rival Alabama, with strong performances by freshmen Bailey Nero and Aly Tetzloff.

No Kendyl Stewart hurts, and it showed against NC State; the Wolfpack won the 100 and 200 backstrokes, and also went 1-2 in the 100 fly (Stewart’s NCAA lineup last March).  On a brighter note, transfer star Anika Apostalon is fairing well in her first semester.

Last weekend was mixed bag for the Volunteers.  They looked great against Missouri, only to turn around and get knocked out cold by Virginia.  Of course, less than 24 hours between meets and having to fly from Columbia to Charlottesville may have played a role in that result.

NC State surprised a number of swim fans last weekend, flying to Los Angeles and downing the Trojans in their home pool by a substantial margin.  Alexia Zevnik and Riki Bonnema led the way, as the Wolfpack won 7 of 8 swimming events to open the meet, and captured all four relay titles on the weekend.

Big jump from #8 to #7.  The Aggies had some big losses coming into the year, but there are still NCAA scorers abound on the roster.  Their first big test of the year is in two weeks against arch-rival Texas.

The Texas women (as well as the men) are known for going toe-to-toe against high-caliber regular season competition.  They took on Indiana and Florida last weekend, dismantling both in their home pool.  This is another freshmen class we need to keep our eyes on.

Their top 5 is as good as anyone else’s in the country, but the Cavaliers are starting to show more depth.  Virginia took the first six events in their dominant win over Tennessee, highlighted by a 1-2-3-4 finish in the 200 free that included three swimmers (CeCe Williams, Eryn Eddy, Megan Moroney) under 1:49.

Louisville isn’t slowing down after last season’s program-best 6th place NCAA finish.  Andee Cottrell has put up some eye-popping breaststroke times, including a 2:08.6 200 in the Cardinals’ SMU Classic victory. This team is looking to replace the lost points of Tanja Kylliainen and support superstar Kelsi Worrell.

Their win against North Carolina was a tight one, and it showed the lack of sprint depth without Chantal van Landeghem, as well as the Bulldogs’ massive void in the breaststroke events.  However, there’s too much talent on this team to (probably) ever fall below third on this list.

The Cardinal have six returning NCAA champions on the roster (two of whom have individual titles), and freshman IM star Ella Eastin is fitting right into the mix without issue.

Our preseason favorite to run the table.  The breaststroke problem persists, but the Bears have been on point through their first two wins.  Elizabeth Pelton is back in action, and the freshmen class is leading the way.

It seems like there is a shortage of breaststrokers generally among the top teams right now. Most teams only seem to have one or two if any (Florida, Cal).

UGA vs. UNC was very close! Not a breeze

I agree. The UGA UNC meet came down to the final relay. Anything but a “breeze”.