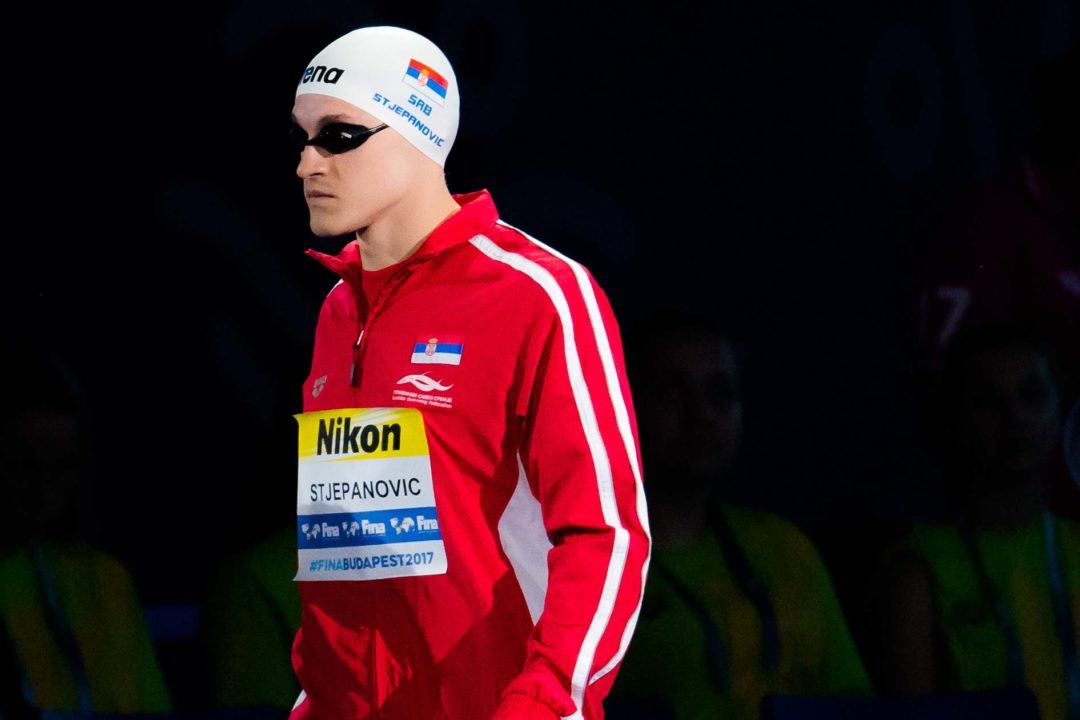 Velimir Stjepanovic (above) was the 2014 European Champion in both the 200 and 400 meter freestyles. He'll race for the DC Trident in 2019. Archive photo via Mike Lewis/Ola Vista Photography

The DC Trident of the International Swimming League (ISL) have announced the addition of Serbian swimmer Velimir Stjepanovic to the club’s roster for the inaugural 2019 season of the league. The 25-year old Stjepnaovic was born in Abu Dhabi, and lived most of his life in the UAE, but his parents were Bosnian Serbs, and he opted to represent Serbia internationally.

After swimming at the 2011 and 2013 World Championships and 2012 Olympic Games, Stjepanovic had his big international breakout meet at the 2014 European Championships shortly after his 21st birthday. There, he won gold in both the 200 and 400 meter freestyles. 5 years later, however, those remain his personal best times.

“We’re thrilled to welcome Velimir to our amazing team of DC Trident athletes, and I know Velimir is equally excited to race in the ISL,” said Trident general manager Kaitlin Sandeno. “Though I’ve been following his swimming career for a short time, it’s clear that his dedication to the sport and determination has brought him tremendous success that I know he will continue onto this team.”

In short course meters, the preferred course of the ISL, Stjepanovic was the 2014 short course World Championship bronze medalist in the 400 free, and the 2013 European Champion in the 200 fly. While most of Stjepanovic’s major hardware internationally has been in long course so far, his times in short course are arguably better.

Of the above times, both his short course and long course bests in his best events, the 200 free, 400 free, and 200 fly, are all from 2014 or earlier. He did swim a lifetime best in the 100 free in short course at last December’s World Championships, and his best 100 fly in long course is from the spring of 2018.

The DC Trident now have 14 men and 11 women on their roster for the 2019 season. The Trident are scheduled to kick off their season on October 4th and 5th in Indianapolis, Indiana.

Love how this guy always takes it out. Gutsy

Doesn’t mean much if you can’t finish… had a coach who preached this mentality in college, it was disastrous. Our 200 guys would split 44/45 and 50-52 on the way home… freaking painful to watch. We’d have 1 or 2 make finals when we should have had 4 if the guys didn’t race like a single cell organism. Coach would always be happy tho!
“Reminds me of college when I was first at the 25 for the 100 fly at ncaa’s”
“Well what place did you get?”
“8th”
“…?!?!?… ok..”
This guy has fizzled and faded HARD the last 5 years. Not worth the punt.