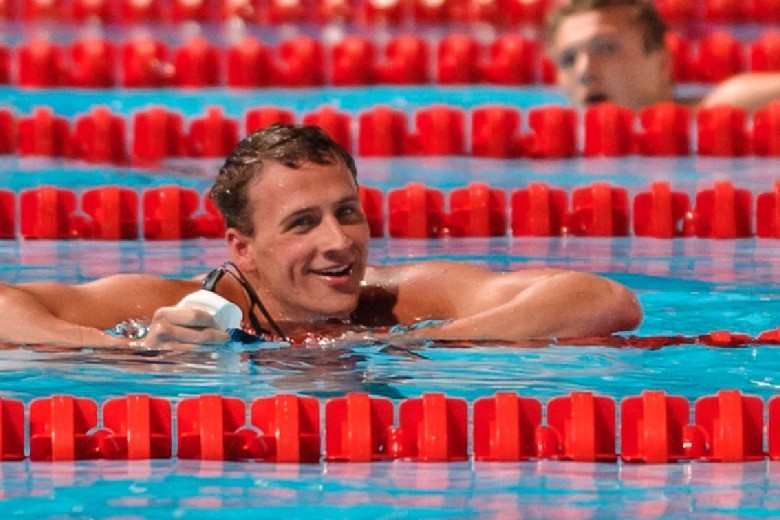 Ryan Lochte is still on the hunt for his first gold medal of the 2013 FINA World Championships, and perhaps his best chance comes on Thursday evening. (Photo: Victor Puig/victorpuig.com)

Day 5’s finals session will be a very busy one on Thursday at the 2013 FINA World Championships. There will be 9 races altogether, including 5 sets of medals awarded, and after being the highlight of the meet’s first night, we’re finally back into relay action as well.

A reminder, all of the links you need to follow tonight’s finals session can be found here.

There’s a ton of great stories in tonight’s evening session, not the least of which is the awarding of medals early-on in two of the biggest men’s finals for the meet: the 200 IM and the 100 free.

In the 200 IM, American Ryan Lochte will try and use his impressive (world-leading among IM’ers) breaststroke leg to hold off a field of very good swimmers – including Japan’s Kosuke Hagino, Laszlo Cseh, and Thiago Pereira.

Lochte will then turn around and swim the 200 backstroke semifinal, though there’s enough time between the two races that he shouldn’t have much of an issue with the double.

Then, in the men’s 100 free, the questions of ‘who is ready to step up’ will be answered. The first two rounds of this event have been such a roller-coaster, that I wouldn’t even want to begin to pick a favorite. The top two seeds coming in, though, are American Jimmy Feigen and Nathan Adrian, but its Australia’s James Magnussen who has the fastest time overall from this meet. What we can all root for, though, is that the final will see a few more guys under the 48 second barrier – just as we thought the men’s sprints were recovering from a global post-polyurethane slump, things have regressed a bit at this year’s World Championships.

The women’s 200 fly will see the meets two women-of-steel, Katinka Hosszu and Mireia Belmonte, battle for gold, while the second seed Cammile Adams from the United States tries to play spoiler. Given how well the Spanish have been swimming at this meet, with 11 National Records and 50% of their swims improving upon seed, it would be hard to root against the Spaniard in this race.

The women’s 200 breaststroke prelims saw one swimmer really lay things on the line: American Micah Lawrence. Now, in the semi-finals, it’s time for Denmark’s Rikke Moller-Pedersen and Russia’s Yulia Efimova, among others, to step up and go with her.

The same is true of the men’s race, where Germany’s Marco Koch was the top seed in the prelims, but plenty of swimmers are lurking behind him, including names like Olympic Champion Daniel Gyurta and World Record holder Akihiro Yamaguchi.

Interesting in that semi-final is that Great Britain’s Andrew Willis took the 2nd seed in 2:09.91, rather than his countrymate, Olympic silver medalist, and World Leader in 2013 Michael Jamieson, who was only 14th in prelims in 2:11.47. Willis was dq’ed in early rounds at the British World Championship qualifying meet, but ended up being reinstated to earn this spot.

Have you given up on the Chinese women in the 2Fly? It seems that they usually hang back in the earlier rounds and then go 1-2 or at least move up. It looks like they are slower this year in the earlier rounds, but I suspect it won’t be just Belmonte Garcia and Hozzu that Adams has to battle for a medal.

liquidassets – that is not, in fact, what the Chinese usually do. In London, Liuyang was the 2nd seed, out of the semis. Zige was the 6th seed, and dropped to 8th in finals.

It was more true in Shanghai, but 1st-7th in the semi-finals there were only separaed by six-tenths of a second, so they didn’t really make any crazy moves compared to their competition.

ok thanks. Maybe I was thinking Shanghai. So Adams has a good shot this time.

Breaden.. did you see this?

Is he talking about Meilutyte or Efimova? The article says Efimova, then he shows Meilutyte, then Efimova. I assume he’s referring to Efimova’s kick off the wall.

DanishSwimFan – it looks like he originally had it as Meilutyte (based on the URL), but perhaps has updated it after he figured out it was actually looking at Efimova? I’ll talk to coach Alex and figure out what’s up.

Looks like he’s updated it that it was actually Efimova, not Meilutyte.

Are we allowed to say “cheater” if she’s russian and coached by Salo?

Look at Magnussen’s pre race disposition, if he shows up tonight instead of the rigid, almost shy looking Magnussen of the last 365 days or so, we will be in for a treat.