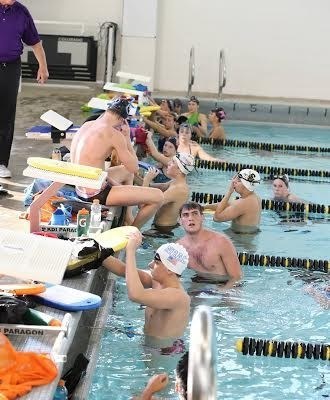 Doug Russell, who won the gold medal at the 1968 Olympics in the 100 fly (upsetting Mark Spitz), has launched a new swim club in the Austin, Texas area. It is called Trinity Aquatics. Current photo via Austin Trinity Aquatic Club

Doug Russell, who won the gold medal at the 1968 Olympics in the 100 fly (upsetting Mark Spitz), has launched a new swim club in the Austin, Texas area. It is called Trinity Aquatics.

The former World and American record-holder was the head coach of Longhorn Aquatics’ Pflugerville site until this year, when he left to begin Trinity.

The new club gets its name from the union of Mind, Body and Water, according to a press release. “Coach Russell believes that the sport of swimming is an all-encompassing adventure,” the release says, “and that he is coaching the mentality as much as the physicality of swimmers.”

Russell has a long coaching history – he was with well-known Texas club Nitro Swimming before his stint with Longhorn. Prior to that, he coached several high school programs, was the head coach of the University of Texas – Arlington program in the 70s, and started Challenger Aquatics, a club for swimmers with disabilities in Las Vegas.

You can find the full ATAC press release here.

The “relationship” Coach Russell had with Spitz was one of the greatest psyche-outs in Olympic history. I guarantee Spitz will never ever forget what happened in Mexico (1968). I hope that Trinity is a huge success.

It’s been incredible to watch the number of parents/kids who move to whatever team Coach Doug leads. He inspires his athletes to achieve results that they didn’t think they could ever achieve. A no nonsense guy, yet his kids will walk through walls for him.

Wow, never expected this. he is close to 70, it takes a lot of energy to run a club. Doug is a great guy and fun to have around pool. A large group of swimmers left Nitro and followed him to Longhorns. Our son and I talked about Doug just last week and about his race in Mexico. Our son took a picture with him at a Nitro meet in Dallas in December 2002 when he won a butterfly event. Coach Doug was very gracious and very approachable coach.

Thank you for posting that race. I noted at the end of the race that there was not any sort of acknowledgement from either Doug Russell to Mark Spitz nor vica-versa on a job well done. Doug got out, put his head down on the block for a moment and walked off. There must be some history between the two?

At that time, Spitz was very immature (he was only 18) and was the older swimmers could not stand his cockiness and arrogance (some would call this extreme confidence). Coach Russell knew that he could beat Spitz but that he had to get inside his head to do it. So, he reversed the tables and swam his Olympic races (semis and finals) the way Spitz would throwing Spitz off balance. Coach Russell, after his super-fast semi-final, scared Spitz which caused Mark to try a different tactic which backfired big time. Spitz went out uncharacteristically fast in the final while Russell was out smooth and easy. By the 80 meter point, Doug went right by Spitz because Mark had spent all… Read more »