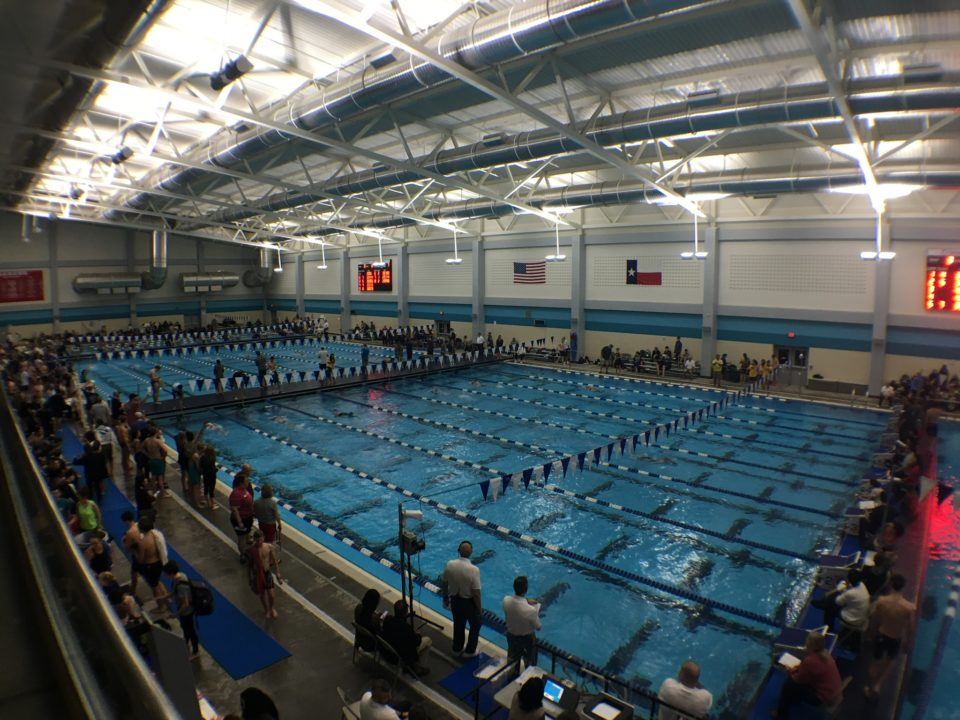 The 2019 King Marlin Swim Club Pro-Am Classic kicked off Thursday with relays and 1000 yard freestyles, with the renowned distance group from the Sandpipers of Nevada taking charge early.

In the women’s 1000 yard free, 14-year old Arabella Sims won in 9:32.59 followed by 13-year old Katie Grimes in 9:39.77 – easily outpacing the field (as part of a 1-2-3-4 finish for the Sandpipers). Those two both hit their Olympic Trials cuts in the 800 free at the same meet, NCSA Juniors, this summer, and were also part of a record-setting 800 free relay together. For Sims, the time was a lifetime best by almost 28 seconds, while for Grimes it was a lifetime best by over 22 seconds. Sims now ranks 2nd all-time in the 13-14 age group in the event, behind only Katie Ledecky, who was 6 months away from becoming the world’s best distance swimmer at the time. The 13-year old Grimes now ranks 5th all-time in the age group, and between them the pair swam the 2 fastest 1000 yard frees for 13-14 girls done in the last 5 years.

That time for Grimes is his best by over 14 seconds, which is about the same margin of improvement for his teammate Brice Barrieault, who at 15 took 2nd place in 9:13.37. Charles Brennig from the Swim Houston Aquatics Center took 3rd in 9:20.30.

Forget about long distances. At least somebody who will close to her at 200. Seven years that Katie is on international scene and still nobody around who will take the baton. It’s not even something that can be named a generation gap. It’s more than generation already. Is American women freestyle swimming in trouble. We see some more or less promising sprinters who are still on outskirts of world level norms. And that’s it.

Within the last 3 years American women have won every freestyle variety except the 4×100 free relay at Worlds or the Olympics. The current average age for those athletes who have won medals is like 24. American women freestyle swimming is not in any trouble.

24 – that’s what I’m talking about. And yes, there is no trouble right now. Now, but what about tomorrow? Tell me names of American oleksiaks, rocks, titmuses, wangs ….

How did they both win the same event?

How fast was Katie Hoff at 14.? She held the record in 1000 until Ledecky made it under 9min at her last year in school.