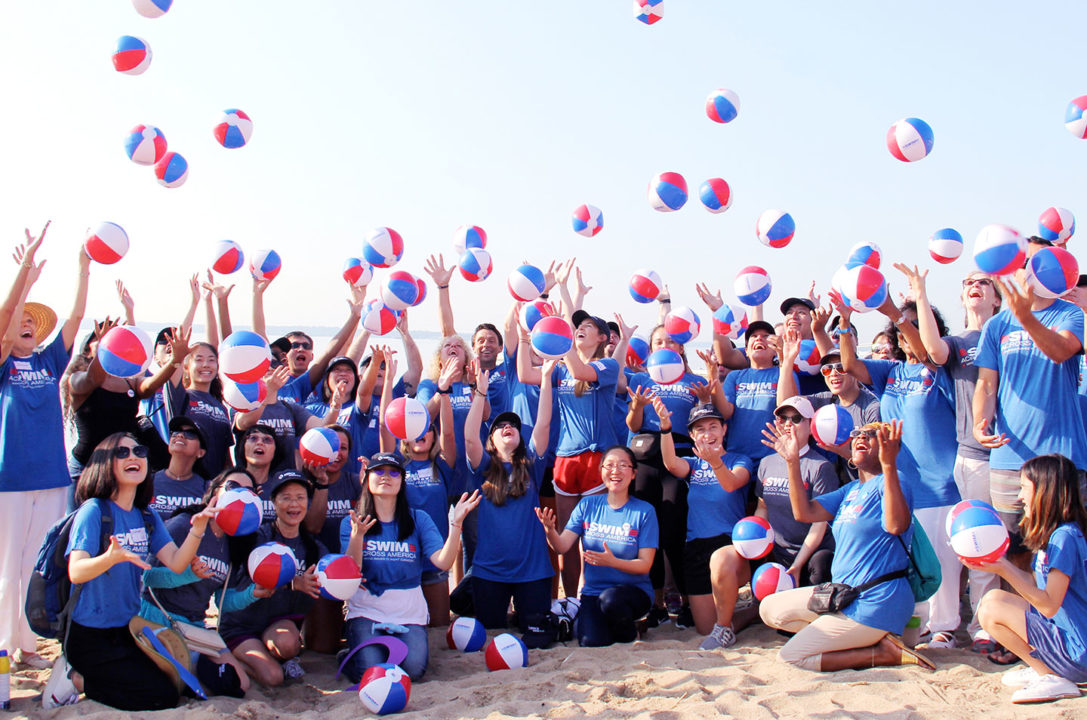 Giving Tuesday is a global initiative encouraging people around the world to consider charitable giving as a portion of their winter holiday spending. Following the traditional shopping holidays of “Black Friday” and “Cyber Monday,” which are all about spending, in 2011 the non-profit Mary-Arrchie Theater Company in Chicago launched the idea of Giving Tuesday to battle the commercialization and consumerism in the winter season.

2019’s GivingTuesday saw an estimated $1.97 billion in donations made to charities around the world of all shapes and sizes and causes.

On this year’s GivingTuesday, we’d like to present a smorgasbord of swimming-themed charities that are worthy of your giving. There are plenty more, but we wanted to look for a representative range of causes and organizations to help guide your giving this GivingTuesday in order to do maximum good through swimming.

Have other organizations worthy of donations? Leave them in the comments and state your case.

Launched by the most decorated Olympian in history after his 8-for-8 gold medal performance at the 2008 Olympic Games, the Michael Phelps Foundation  has provided swim lessons to over 50,000 people. Other missions of the organization include the Level Field Fund, supporting the mission of professional swimmers. In the last few years, Phelps has added a mental health component to the foundation’s mission

The Jesse Reese Foundation was founded in the honor of honor of Jessie Rees, a 12-year old swimmer who lost her battle with cancer in 2012. During a 10-month battle with cancer, she helped other kids fighting cancer who couldn’t leave the hospital via creation of JoyJars, and the organization continues to operate on the belief that every kid fighting cancer deserves to smile and be encouraged to “Never Ever Give Up” (NEGU).

The UK-based Black Swimming Association was founded by a group of individuals of diverse backgrounds, including international swimmer Alice Dearing, music producer Ed Accura, broadcast journalist and former college swimmer Seren Jones, and businesswoman and inventer Danielle Obe. The mission is simple: diversify aquaitcs at every level, from recreational to the Olympics, by addressing the systemic barriers to participation for the Black community. In a year where racial injustice has hit a tipping point around the world, the BSA is asking the swimming world to look inwards at its own hsitorical problems with diversity.

In 2020, Swim Across America will award a record $6 million in cancer and research grants that will directly fund more than 50 projects and programs. Not just a fundraiser, but a full-blown cancer organization that funnels money directly to cancer research, Swim Across America has granted almost $100 million in its history. The organization requires that 100% of grants be applied to approved projects and not ancillary costs like overhead or building costs. Money is raised through open water swims and pool swims, with 21 major events across the US now in operation. Over 100 Olympians have attended Swim Across America events.

The Tampa Bay Forgman Swim has a goal of building national awarness of the Naval Special Warfare community and support the Navy SEAL Foundation, which has a mission to provide “immediate and ongoing support and assistance to the Naval Special Warfare community and their families.” The original swim in Tampa Bay sold out this year in 20 minutes, and has expanded to another one in Boston. The 2019 event raised a record $720,000. The event has attracted big names in competitive swimming include Becca Mann and Brooke Bennett in prior years.

Held annually at USC’s Uytengsu Swim Center, the Swim With Mike honors USC All-American swimmer Mike Nyeholt. Nyeholt broke his neck in a motorcycle accident in 1981, and USC administrator Ron Orr was inspired to organize money to fundraise for an adapted van. Since then, the event has grown to raise $21 million to provide scholarships to athletes who have disabilities. The event draws in members of the USC community including cheerleaders, football players, and even USC alumnus and famous actor Will Ferrell.

2020 marks the 10 year anniversary of the day where elite international American open water swimmer Fran Crippen died at a race in Fujairah, UAE during a 10 kilometer open water race. The Foundation, started by his family, has a goal of keeping alive the legacy of son and brother Fran. The organization has two tangible missions in the sport of swimming: improving access to swim lessons and decrease risks of drowning, and awarding grants to one elite athlete each year training for the Olympics. The Crippen family have also been vocal proponents for improving the safety of open water races from amateur to elite levels, which has resulted in an almost-unrecognizable shift in the safety elements of these swims.

The International Water Safety Foundation has a mission to raise awareness of and teach basic swimming, water safety, CPR, and safe rescue skills around the world. Its programs include a Terad-A-Thon to raise money to fight the drowning pandemic by treading water, and International Water Safety Day. The IWSF has launched programs around the world, including places like Cambodia, St. Croix, Maldives, and Uganda.

We’ve seen a record number of college swimming and diving programs cut in 2020, with administrators blaming the financial fallout of the global coronavirus pandemic for the decisions. Some of those, like William & Mary, have been saved. Others, while still fighting for their lives, are not so lucky. There appears to be few corners that are safe from this run on college swimming: historic programs like Michigan State and Iowa, to the young blood of the NCAA like Boise State, are all facing the consequences of decades of financial mismanagement by collegiate athletics departments. The one surefire way to influence an administration’s decision when it comes time to cut costs is with your dollars. If you enjoy watching college swimming, if you swam at a college swimming program, if you appreciate the strength of the US Olympic swim team, or if your child wants to swim in college in the future, consider making a donation to a college program. If every SwimSwam reader were to donate $10 to a college swimming program of their choosing every year, a whole lot of programs would be endowed very quickly. If you can find $100, even better. If you feel your college swimming experience was worth $1000 to you, pay it forward. The money might not add up right away, but if we had all started doing this 20 years ago, swimming & diving programs would be in much better shape than they are today. Let’s not look back in another 20 years and have the same sinking feelings that we do today.

11)  A MATTER OF 50 METERS –  Help Southwest Ohio build a new 50m pool that will expand room for swimmers of all ages and abilities — to learn how to swim, to join their first team, and to enjoy a lifetime of health and wellness!