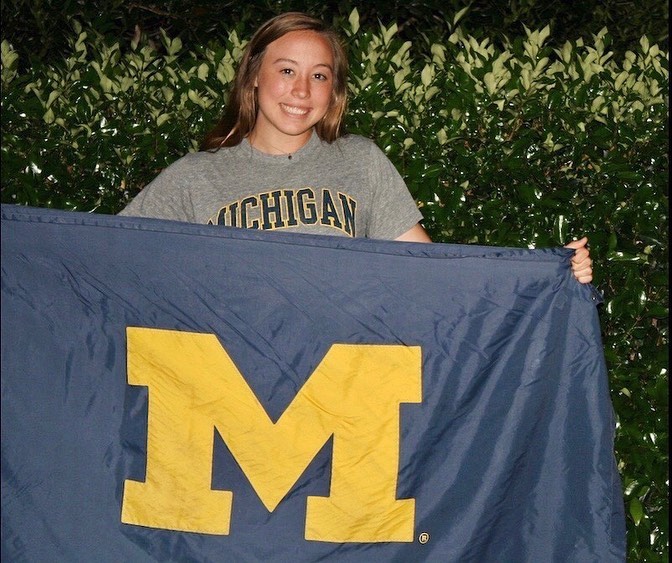 After originally committing to Indiana University, Flynn has now decided to enlist with another Big Ten program - Michigan. Current photo via Lindsay Flynn

After originally committing to Indiana in the fall, the #10 ranked recruit in the high school class of 2021 has changed her mind and will instead swim for a different Big Ten team: the Michigan Wolverines. Flynn announced her new decision about a month ago.

Flynn, who trains with the Aquatic Team of Mecklenburg in North Carolina, has gone several best times since her commitment to Indiana. For the most part, those best times were her yards swims catching up with her meters swims after a breakout summer in long course.

The sprint freestyles were a strength for Michigan last season en route to a 2nd-place finish at the Big Ten Championships. They won the 400 free relay and were second to the champion Buckeyes in the 200 free relay. But Ohio State was very good in those sprint events as well, and actually doubled Michigan’s individual scoring in the 100 free (122 points vs. 61 points), though the gap in the 50 free was much closer.

Flynn’s best time in the 100 free would have earned her an invite to the NCAA Championships last season.

I think u mean NC State but aight

Hey if you recruit verbally committed kids at least you know who you’re competing against haha Happens in football an basketball all the time. Not gonna make many friends that way but 🤷‍♂️It’s a job not a social club. In business people recruit currently employed people all the time.

Exactly! It makes for a more exciting, cutthroat environment which is great for the pizzaz of sport.

Any idea what happened to her coach at ATOM? I noticed he is no longer listed on their site.

Any idea what made him switch?

Wow, tough for IU. Wonder what it was to make the change, maybe Jonty leaving? Big blow between Lindsay and Cora.

Congratulations! Great get for Michigan.
She’s not the first swimmer in the class of 2021 to change her commitment to Michigan. Greta Gidley was originally committed to Alabama but she re-committed to Michigan too.

So begs the question… Should college coaches stop recruiting kids after they make a verbal commitment to another university or keep recruiting them in the hopes they’ll switch? Can we assume what Michigan is doing per above?

Kinda sorta looks like they do! They also, in clandestine manner entice current NCAA athletes to “jump ship”! To think otherwise is naive. Some schools are very active in so doing.

Personally I do not support recruiting swimmers after they already committed. If a swimmer feels the need to re-commit, they might just start contacting other college coaches, and the commit should find the program they chose to be a good fit for them. Michigan could be recruiting committed swimmers because they already got two swimmers to change commitments, but maybe not because it seems like many swimmers don’t find Indiana to be a good fit for them and transferred lately, and on an article when an Alabama swimmer quit many commenters said something was wrong with the team culture there, so the swimmers might have felt the need to recommit, so we cannot assume Michigan is doing that.

It’s called a verbal commitment for a reason.

Many coaches are resorting to this technique. It is also safe to assume that kids who are rethinking their decision just decide to reach out

Or perhaps the coach who recruited her and with whom she developed a strong relationship and believed could develop her best as a sprinter “retired” mid-season so she took the time to decide where she felt most comfortable in light of that.

I think this is the most accurate assessment.

Congrats, Lindsay!
Anyone check on Looze?