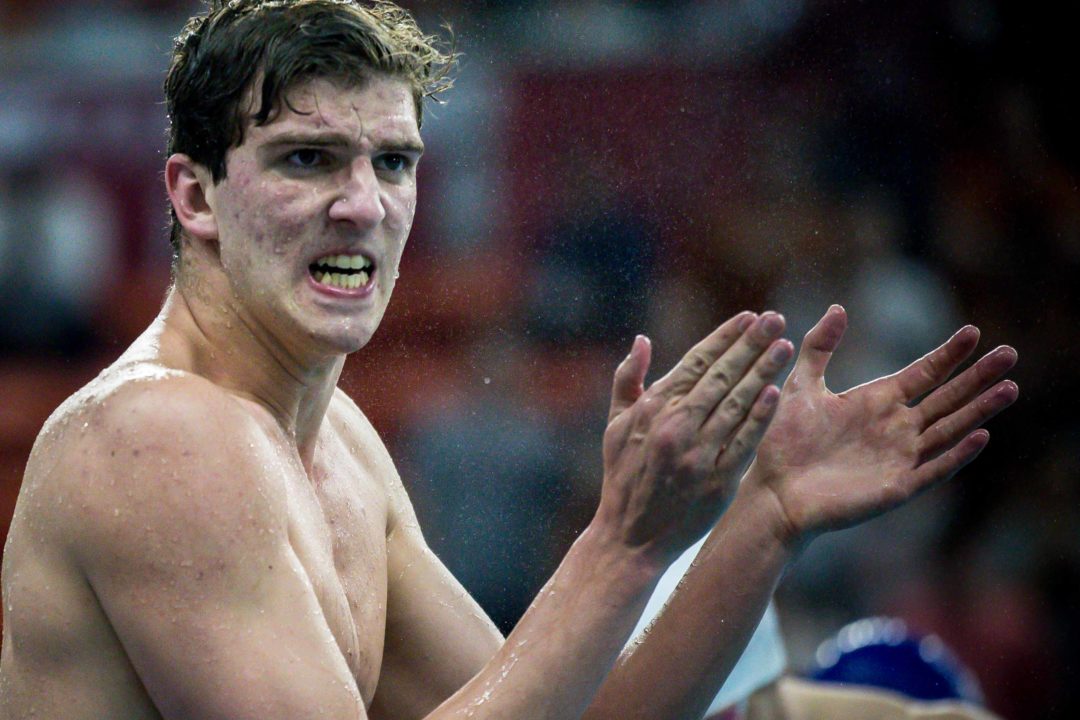 Zach Apple has the two fastest 100 free relay splits so far in the 2020 ISL season, including a 45.15 split to anchor DC's 400 free relay. Archive photo via Jack Spitser/Spitser Photography

It was a roller-coaster of a day that saw London jump out to a huge lead ahead of the field thanks to a number of jackpot finishes.

In 20 events, there were 9 wins by London, and several of those, including a 15-pointed from Annie Lazor in the 200 breaststroke, saw big jackpot takes.

Below are the biggest storylines coming out of day 1 of the meet.

We sort of knew this on paper going in, but of the first 2 meets, the first one, with Cali Condors, LA Current, Energy Standard, and New York Breakers had the stronger field than did this 2nd meet.

London Roar looked better than expected without the Australians – still showing off depth in the men’s relays especially. But, it’s hard to know yet what that’s going to look like against a tougher field.

That won’t really happen until week 3, when London faces DC, LA Current, and the Tokyo Frog Kings, who we haven’t yet seen yet but who are expected to be in the top half of the league.

London then has to race against the Cali Condors, who dominated the first meet, twice to end the regular season.

Regardless, by winning this meet, which it appears they’re more-than-ready to do, especially now that they get to pick the strokes for both skins races, they’ve all-but-guaranteed victory here. That alone could be enough to get them into the top 8 and qualify for the semi-finals.

After this meet ends, we’ll run some math on how the teams from the two meets stack up.

There were a ton of first-time winners on the day, but for the Trident this was a big emotional win for them, to sweep the women’s backstrokes, especially for Bilquist to so handily beat the field in the 200 that included Katinka Hosszu, Kira Toussaint, and Darina Zevina, among others.

The Trident had quite a few wins on the day, and some really good relay swims to boot. But they lost a lot of points by Jackpot as well, which has kept them in last place so far.

For comparison, the fastest split in meet 1 on a 400 free relay was 46.29. Maxime Rooney split 45.86 on a medley relay anchor, but Apple is far-and-away ahead of the rest of the field in relay splits right now.

Monday’s flat-start will be enlightening. Caeleb Dressel swam 45.87 in the individual 100 free in meet 1.

The Hungarian Hosszu, who was one of the top swimmers in season 1 of the ISL, struggled in 2 swims on day 1 of the meet, at least by her standards.

We’ve seen a few stars falter this year in the ISL. Adam Peaty hasn’t won a race, Caeleb Dressel struggled early but then recovered, Chad le Clos was 4th in the 100 fly. This has left opportunities for some new swimmers to step up and score some points and earn some money.

This is a reminder that this ISL format is not the same format as the Olympics, and that while swimmers have certainly been able to perform well in both, the approach is not exactly the same. That’s sort of what makes this format interesting, the potential for variability, and that’s starting to show itself more this season than last.

She was picked up by her teammates, and especially Ranomi Kromowidjojo and Melanie Henique for a 1-2 finish in the women’s 50 free. Depth for relays was a struggle for Iron last year, and they’re a little better this year, so that gives them hope of moving up from 5th to 4th and into the final this season.

His left hand is twice the size of his right.

Zach Apple is a God and the GOAT, Ray Looze and the great Indiana University are very proud him for his outstanding accomplishments!

Would like all of us to leave you alone so you and Ray can have some time you your self? I mean hell, for a team that is probably in the top of transfers in the NCAA( probably because Ray is known for putting swimmers against each other) you sure give me a lot of praise.

Just like with DeSorbo effect, I think we’ll all keep hating on Guerra for being rude but miss him when he’s gone (if he disappears)

Come on guys! Join me at Nicks English Hut in Bloomington on Tuesday night and I’ll buy the beer and Stromboli’s. We can talk things over in a friendly manner. I’ll be the guy sitting upstairs wearing a new T-shirt with Ray Looze’s picture on it that says “the GOAT.”

Let’s just get excited for all the fast swimming that has yet to come in season 2!

Apple going under 46 in the individual event tomorrow?