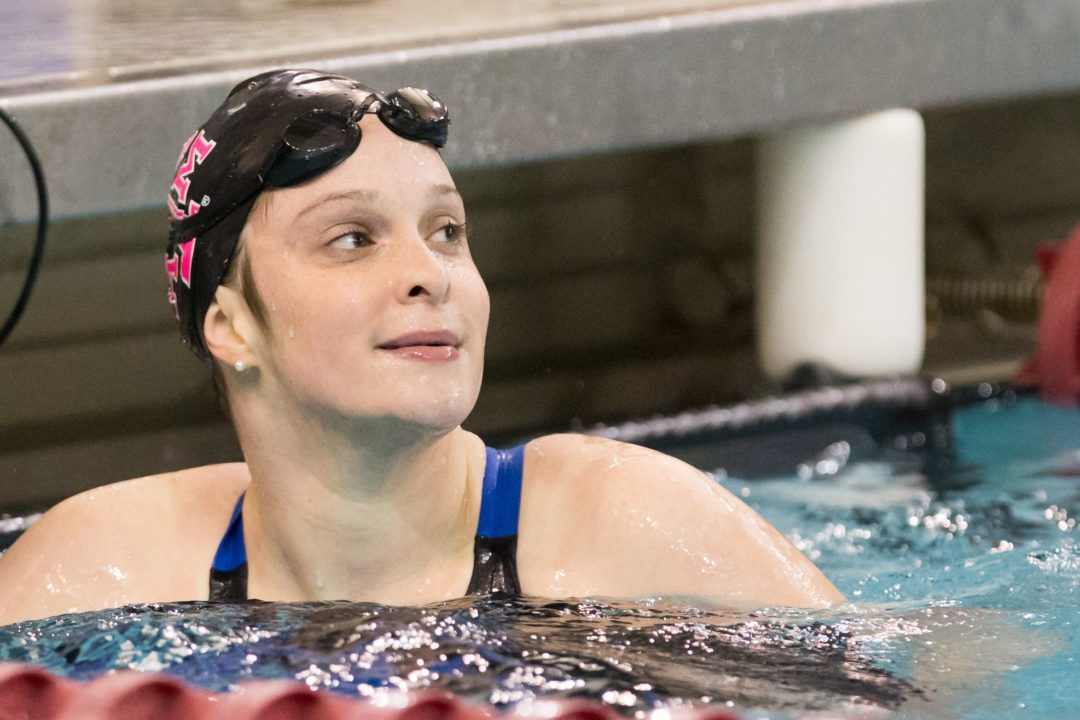 Cammile Adams will look to fend off a talented, young field to seal a spot on the Pan Pac team tomorrow. Current photo via Tim Binning/TheSwimPictures.com

Kicking off the 2014 U.S. Championships tomorrow for the women will be the women’s 200 meter butterfly.  Whichever way you slice it, it’s an event that has been one of the weaker events for the United States on the international stage; the last time Americans won a medal at an Olympics or long course World Championship was all the way back in 2007.  However, with a couple ever-improving big-hitters, combined with a massive group of youngsters, that drought should be over soon.

Apart from a couple regulars (Cammile Adams, Maya Dirado), this is an event that is largely dominated by the next generation of American swimming.  Incredibly, five of the eight fastest swimmers at U.S. Nationals last year were born in 1996 or later!  Add in another couple youngsters (Remedy Rule,Lauren Case)who have already been 2:12.0 or faster this season, and we see there is an incredibly bright future ahead here.  Nine of the top 17 seeds are 18 years old or younger.

Leading the way is defending national champion Cammile Adams of Aggie Swim Club.  Adams, who just finished her illustrious collegiate career at Texas A&M, has gathered more accolades in this event than the rest of the field combined.  In addition to her 2013 U.S. National Championship, she also finaled at Worlds last summer, qualified for the 2012 Olympic Team, and has been the fastest American in the field at each of the last four NCAA Championships (two wins, two seconds behind Katinka Hosszu).  Considering she is also the fastest American in the long course pool this year by nearly a full second (2:08.45 last month in a great showdown with Hali Flickinger and Lauren Harrington), there don’t seem to be any signs of her slowing down.

Flickinger and Harrington, teammates down at the University of Georgia, are both in great position to make a run at a Pan Pac roster spot.  After a decent freshman season, Flickinger rose to the occasion in her sophomore campaign, finishing in the top ten in two events at NCAA’s, and already destroying her best long course times in the 200 IM (one second), 200 free (two seconds), and 200 fly (2.5 seconds). Harrington also had a great swim at the Bulldog Grand Slam, where she recorded the third fastest American time in 2014 (2:10.15).  The two Bulldogs sit fourth and fifth on the psych sheet tomorrow.

The 200 meter butterfly is still a fairly new event for Maya Dirado, who, up until last summer, focused heavily on the backstroke and IM events.  After making significant strides for three consecutive years in her other three strokes within her IM, combined with the overwhelmingly competitive U.S. backstroke field, Dirado changed her focus toward from the 200 backstroke to the 200 freestyle and 200 butterfly.  There have been big dividends so far, including a World Championship semifinal appearance last summer in this event.  It will be interesting to track Dirado’s results for a couple of reasons:

(1) What happens after having a year to actually train for the event?
(2) What do we make of her swims so far this summer (they haven’t been particularly world-beating)?
(3) There are indications this could possibly be her last meet on U.S. soil at this level of competition.  She will definitely be looking to go out with a bang.

Behind Dirado and Adams, there is a slew of pre-collegiate teenagers who will be fighting for a spot on the Pan Pac (and, potentially, World Championships) team.  First on that list is Mission Viejo’s Katie McLaughlin, a rising high school senior who swam the third fastest American time in 2013, and currently sits fourth in the U.S. this season.  In addition to her incredible 2:08.72 to win at FINA World Juniors last summer, McLaughlin is coming off of a great short course campaign, where she crushed her previous bests in both butterfly events.  Those results are a good indication she’s in position for another big summer.  She sits third on the psych sheet for tomorrow, and is in a great spot to land on her first big international team.

Hannah Kukurugya from Crown Point Swim Club is the next one down.  A relative unknown until last week, Kukurugya blew away the C-final at Junior Nationals last week, dropping five seconds from her prelim swim to win the final, posting the second fastest time in the entire event.  It’s hard to know if she has any left in the tank, but even if she holds steady, she’s in position to make the A-final.

A pair of prep standouts from the great state of Michigan also needs to be given their do.  Like Mann and Kingsley, Courtney Weaver of the Flint ‘Y’ Falcons is a returning Nationals finalist and Olympic Trials semifinalist.  Weaver, who is Georgia-bound this fall, is coming off a strong short course season, as well.  Madison Wright of Kingfish Aquatics didn’t final at U.S. Nationals last year, but she did crush it in the B-final, cutting more than a second and a half from her morning swim to make her the sixth fastest performer of the whole competition (2:11.18).

Somehow, we still have another four prep swimmers that we still need to recognize, so we’ll make this quick:

U.S. National Team veteran Elizabeth Beisel also deserves a mention.  She qualified for the championship final here last summer before scratching, and with this being maybe her fourth or fifth best event, it’s entirely possible she chooses the 800 freestyle over the 200 fly, or defers competing in the 200 fly entirely to maximize her chances elsewhere.  However, for the sake of this preview, we’ll assume she swims the event.

Another veteran who could make waves here is Caitlin Leverenz of California Aquatics.  While she is primarily known as a world-class breaststroker and IMer (including a 2012 Olympic bronze medal), Leverenz’s butterfly has picked up over the last couple seasons, including a World Championship Trials final appearance last summer.  You can’t forget about Celina Li, either.

Simone will need a 24 low to have a slim chance a 24,5 wont even be close. Halsall and sjostrom being sub 24 and there is ranomi and capmbell too

“Weakest US event on the women’s side for a few years now with no real medal contenders internationally.”

I wouldn’t quite say that. At least not the “for a few years now” part. Kathleen Hersey was 4th at the Olympic Games two years ago. She is definitely missed. I’d say intentionally the 50 free has been much weaker going by results. But the 200 fly could match the 50 free unless McLaughlin, Bayer, or one of the other new young faces steps up soon.

I agree.
50 free is by far USA weakest event in the womens events. Since 1998 Worlds, only Dara Torres has won medals at either worlds and the olympics. That’s 4 olympics and 7 world championships.
We’ll see if Simone Manuel will be competitive enough to challenge for medals, although I have my doubts.

It’s funny. In almost all your previews you mention Beisel in the possible contenders. You want to kill her? She can’t swim all events! 🙂 Why would she waste her energy in that event? 🙄 It would be absolutely stupid.

Weakest US event on the women’s side for a few years now with no real medal contenders internationally. Or second weakest. There’s a match with the 50 free.

1. Cammile Adams. She’s very consistent around 2.07.
2. Katie McLaughlin. Reigning world junior champion. Huge talent. The future.
3. Maya DiRado. She surprised many people last year in that event. It will not be a surprise again.
And go Cassidy Bayer! 3 years ago I wrote she… Read more »

(3) There are indications this could possibly be her last meet on U.S. soil at this level of competition. She will definitely be looking to go out with a bang.

Wait, is that implying that she may retire after this season? That would be too bad – she’s really broke through the last year or two.But that kind of seems to be the trend with Stanford the past few years.

I remember Maya saying a couple times after last summer and NCAAs that she wasn’t sure what her plan was after this summer. I think she was going to see how the summer went and base it off that.

It would be too bad.
Maya must continue and go to Rio. She has never been as strong.

Maya has made it known a number of times publicly that she might be done after this summer, or might keep going. We’ll see what happens the next few weeks.

Your summary doesn’t quite hint at Bayer’s full potential with the limited sample of her LC swims (pb from last summer). Granted SCY and LC aren’t quite the same thing, yet a 1.56.01 in the 200 yds fly is astonishing. In December that swim broke Mary T’s 34 year old record (1979!) by half a second. Nobody besides herself and Meagher have been under 2:00 and it was the oldest record on the books in that age group.

Noted. Added in the Meagher point.

Bayer has been injured this summer.