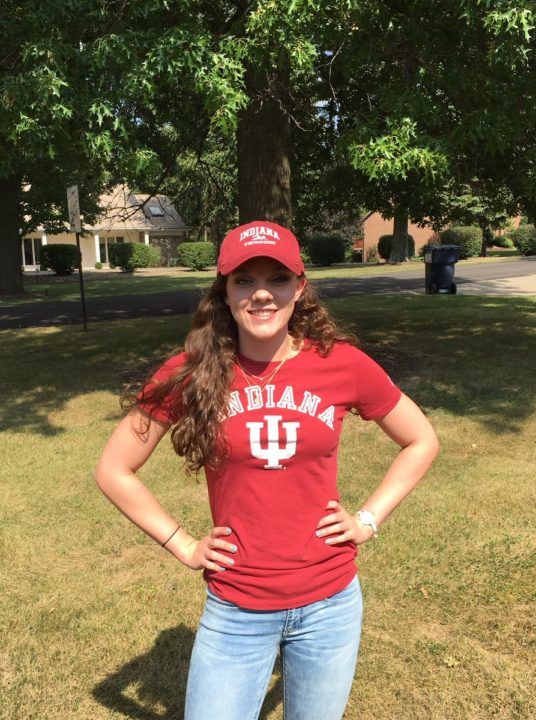 Camryn Forbes is the latest to announce her verbal commitment to the Indiana University class of 2021. Current photo via Camryn Forbes on Twitter

Butler County YMCA’s Camryn Forbes announced via Twitter that she had made a verbal commitment to Indiana University for 2017-18.

Beyond excited to announce my verbal commitment to Indiana! I can’t wait to see what my future holds there! GO IU!! pic.twitter.com/LLnBt1KZ82

The Knoch High School senior has been the reigning YMCA national record-holder in the 100 meter backstroke for the last three years. She first established the mark at 1:02.68 in 2014, lowered it to 1:02.54 in 2015, and then again to 1:02.14 this past summer. Her 2016 performance was especially gratifying, after having had a disappointing race at Olympic Trials in June. Forbes also swam the 200 back at Trials; she earned new PBs in both distances at YMCA Summer Nationals. Forbes’ top times include:

Forbes will add firepower to the Hoosiers’ talent pool in backstroke as soon as she suits up. Both her 100 and 200 back times would have been B-final scorers at 2016 B1G Championships, and she will be a great addition to a workout group that already includes Kennedy Goss, Marie Chamberlain, Alexandra Rockett, and Rachel Matsumura, all of whom will be seniors in 2017-18.

Indiana is on a roll with early commitments. The Hoosiers’ class of 2021 will also include: Abby Kirkpatrick, Anna Kirkpatrick, Grace Haskett, and Kendall Hermann.