Yannick Agnel to Race at Duel in the Pool, Minneapolis Grand Prix 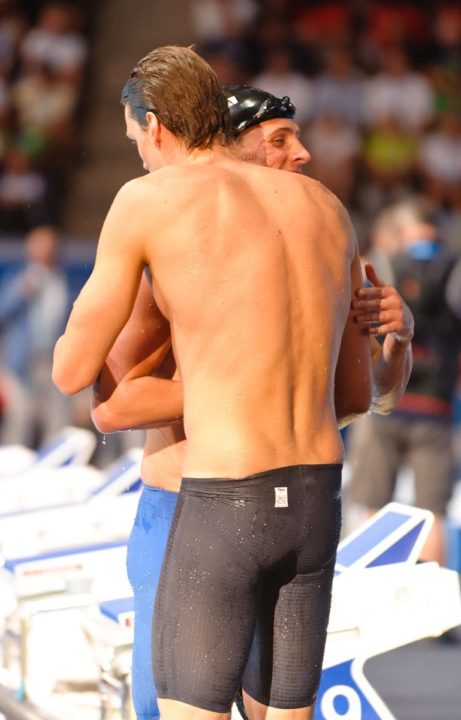 Yannick Agnel embraces competitor Ryan Lochte after the Frenchman took gold at the World Championships in the 200 free in 2013. photo via Victor Puig

Yannick Agnel has already picked out his first two major targets for the 2013 fall season, now under the watchful eye of Bob Bowman in Baltimore.

According to SwimVortex.com, Agnel will first swim at the yards-based Minneapolis Grand Prix from November 14th-16th: perhaps the first time we’ve seen the French giant race in a yards course.

He will then hop across the pond with at least one teammate, American Conor Dwyer, to Glasgow, Scotland for the 2013 Duel in the Pool from December 20-21st.

Agnel and Dwyer were first and second in the world at the 2013 World Championships in the men’s 200 freestyle.

Neither the American nor the European rosters have been announced in full yet.

No surprise but I’m very happy. 🙂
Great news.
But I’m not sure he will swim at the French championships and at the European championships. Duel in the pool would be his 4th meet in one month. We’ll see.

I Could definitely see him at a sub four minute five hundred!

..Why would he not do that?

is he just going to train solidly for 2 years for Kazan?