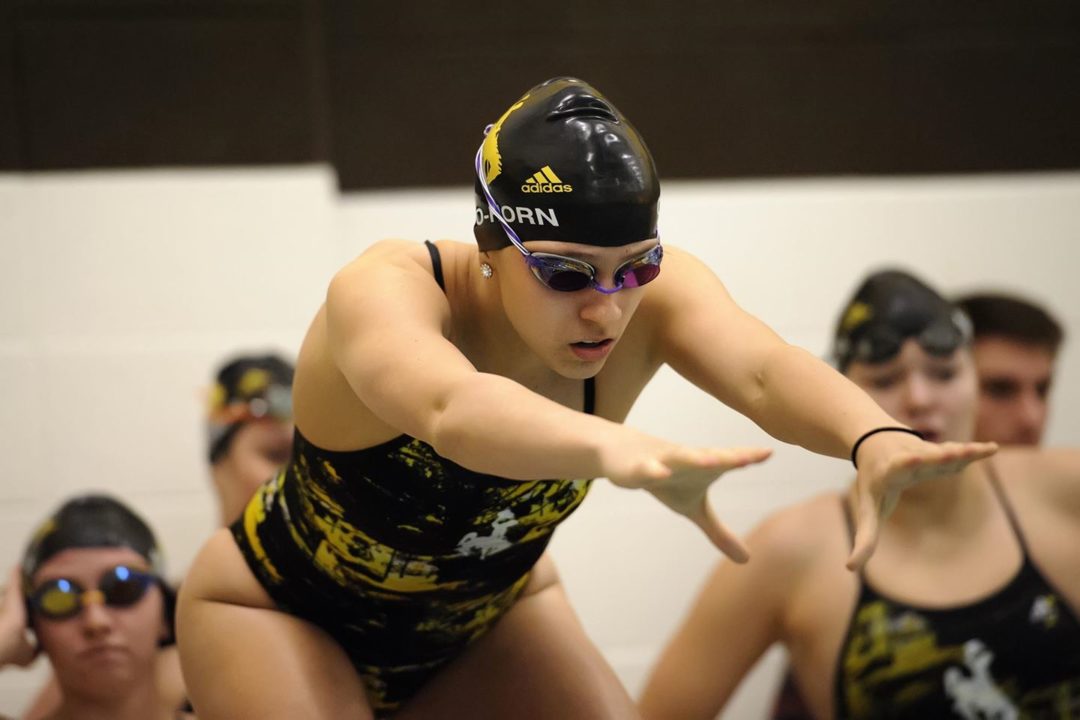 The Wyoming swimming squads were in action Friday taking on the Colorado School of Mines. The men's won 111.5-93.5 while the women earned a 133-72 victory. Current photo via Ted Brummond, UW Photo Service

Spencer Maher Commits to College of the Holy Cross

College of the Holy Cross has received a commitment from Spencer Maher. He will begin swimming fall 2020, and he will be joining the school’s class of 2024.

Backstroker Jake Riva has committed to swim for the United States Military Academy at West Point beginning in fall 2020.

Wyoming vs. Colorado School of Mines

GOLDEN, Colo. – The Cowboys and Cowgirls swimming squads were in action Friday night to take on the Colorado School of Mines in Golden. It would be a strong showing for both teams with the men’s squad winning 111.5-93.5 while the women’s squad earned a 133-72 victory.

“We had a successful day on both the men’s and women’s side against Colorado School of Mines,” head coach Dave Denniston said. “For the women, two Wyoming student-athletes stood out and had breakout performances. Hannah (Linde) won the 100 breaststroke in a time of 1:08.78, which is just shy of her career best and Avery (Otto-Horn) took the 100 butterfly with a comeback victory. On the men’s side, PJ (Musser) and Tyler (Klatt) are really showing solid leadership in winning their events and Thomas (Diaz) was strong in the 500 freestyle. Overall after a tough week of training, the team performed at a high level and with good energy for how hard they worked. We are set up for getting a little bit of rest next week.”

The meet would start with a bang for Wyoming as they would win the first two events of the meet. In the women’s 200 medley relay, the team of junior Katelyn Blattner, freshman Jesse Paxton, sophomores Phoebe Browne and Sani Carsrud took first touching the wall at 1:50.10. The team of junior Hannah Mclean-Leonard, senior Stephanie Grandin, junior Tanja Milanovic and senior Kiana Junior took second in the event with a time of 1:50.51.

The next event would be the men’s 200 medley relay where the team of freshman Andrew Rodriguez, junior Mitchell Hovis, sophomores James Bouda and Grant Sloan would touch the wall in first with a final time 1:34.24.

The first individual win of the night would come on the men’s side in the 1000 freestyle. Sophomore Ryan Netzel would take the event in dominant fashion finishing with a time of 9:51.73, which was over ten seconds faster than the second place finisher. Senior Jacob Harlan would take fourth on the event with a time of 10:12.35.

The 50 freestyle would be the next event the Cowgirls and Cowboys would sweep. On the women’s side, it would be sophomore Kira Crane who would win as she touched the wall with a time 24.71 while fellow sophomore Avery Otto-Horn would also score points in the event taking fourth with a time of 25.69. For the men, it would be Bouda earning the victory as he came in with a time of 21.22 to out touch the rest of the field. Junior Alex Jaegers would take sixth in the event with a final time of 22.71.

The women’s 100 yard butterfly would be another strong event for the Cowgirls as the duo of Otto-Horn and Crane would record a 1-2 finish. Otto-Horn would lead the way finishing in first with a time of 59.81 while Crane followed with a time of 1:00.37. Senior PJ Musser brought home a first place victory in the same event touching the wall in 51.18.

Blattner took first in the 100-yard freestyle with a time of 53.25 while Sloan earned points for the Cowboys with his first place finish of 46.91.

It was another 1-2 finish for the Cowgirls in the 100 backstroke. This time it was led by Mclean-Leonard who clocked a 58.08 on her way to a first place finish while sophomore Andrea Niemann would finish in second with a time of 1:00.43.

On the men’s side in the 100 backstroke, Klatt would finish ahead of the rest of the field touching the wall in 51.42 while sophomore Miller Browne would finish in second with a time of 53.22.

The Cowboys would get their next win one event later in the 500 freestyle. This time it would be freshman Thomas Diaz  picking up a win as he swam to a time of 4:46.89 for first. Fellow freshman Daniel Cumnock-Francois would earn a fourth place finish in the event with a final time of 4:51.27. Harlan would finish one spot behind him in fifth with a time of 4:51.55.

In the women’s 100 breaststroke, junior Hannah Linde coming in first as she recorded a time of 1:08.78. Paxton would touch the wall in second with a final time of 1:09.60.

The Cowgirls would end the night the night with a victory in the 200 freestyle relay. The team of Carsrud, Junior, Otto-Horn and Mclean-Leonard placed first with a time of 1:38.36 to cap a solid night for both the Cowgirls and Cowboys.

Mia Wood smashed her pool record in the 1,000-free among three event wins, while Migus Wong set a new facility mark of 57.34 seconds in the 100-breaststroke to highlight the meet. Mines battled with multiple event wins to push Division-I Wyoming as the men fell in a 111.5-93.5 scoreline, and the Cowgirls won the women’s meet 133-72.

Prior to the meet, Mines honored its four men’s seniors as they competed for the final time at home: Iain Bisset, Tyler Buck, Chance Dodds, and Seamus Millett. Friday’s meet was the lone men’s home competition of 2019-20.

Wong’s pool record in the 100-breaststroke came in the penultimate event as he won in 57.34 with a great finish over Wyoming’s Grant Sloan at 57.58. Wong’s time bests Sam Knott‘s previous record of 57.72 set last season. Freshman Cobi Wood scored a win in the 200-free in 1:45.05 with a terrific finish to out-touch Wyoming’s Miller Browne by a tenth.

Mines will turn around and head to Adams State Saturday for a noon meet.