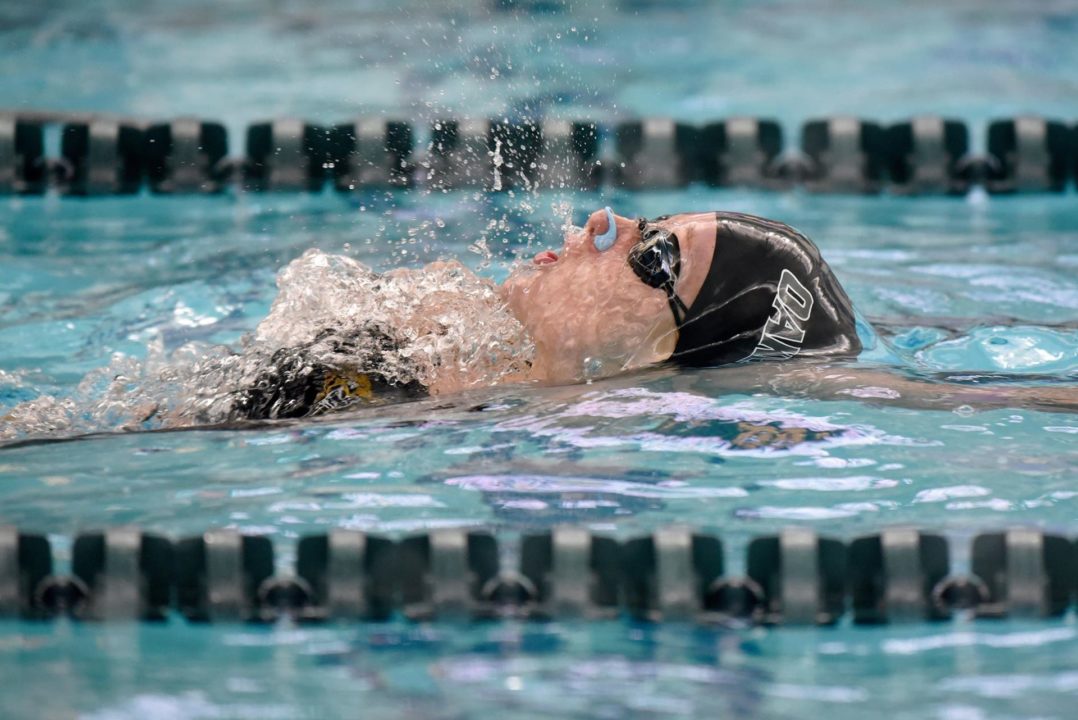 The Oakland men's and women's swim and dive teams had no problems against Wayne State in their home pool at Matthaei Center Natatorium. Current photo via Jose Juarez, Oakland Athletics

DETROIT, Mich. – The Oakland men’s and women’s swim and dive teams had no problems against Wayne State in their home pool at Matthaei Center Natatorium as the men overtook the Warriors 191-109 while the women won by a score of 221-78.

Last week’s Horizon League Swimmer of the Week, Susan LaGrand had another impressive night in the pool as she swam to four first place finishes. Two coming individually in the 100 butterfly (56.35) and 200 butterfly (2:06.17) and the other two as a part of a relay. LaGrand placed first in the 200 yard free relay with teammates Katie Colwell, Sydney McDowell and Kirstyn Abbasse with a time of 1:36.84 and first in the 400 yard medley relay (3:49.26) with Taylor Bailey, Grace Shinske and Sohvi Nenonen.

On the men’s side, Marko Knotynetskyi had three first place finishes in the 100 backstroke (51.33), the 500 freestyle (4:44.88) and the 400 yard medley relay which he was a part of with Christian Bart, Mack Flowers and Rudy Aguilar.

On the diving board, Jordan Smith took first in the three-meter dive by a score of 260.47 while Bernie Turchi dominated the women’s one-meter, placing first with a score of 267.52.

The swimming and diving teams will continue competition Nov. 1-2 at home as they will face Northwestern and UIC in the Oakland Aquatic Center.

The 15th-ranked Wayne State University men’s swimming and diving team fell 191-109 to Division I Oakland at the Matthaei Natatorium on Friday.

Freshman Luka Cvetko (Varazdin, Croatia) placed second in the 200 back with a time of 29.15.

RELAY RESULTS
The Warriors notched a victory in the 200 free relay (1:23.58).  The winning quartet included Katulski as the lead off, sophomore Stewart Nowinski (Macomb, Mich. / L’Anse Creuse North), Mueller, and Cvetko as the anchor.

The 12th-ranked Wayne State University women’s swimming and diving team lost 221-78 to Division I Oakland at the Matthaei Natatorium on Friday.

Freshman Marina Tarlev (Athens, Greece) placed fourth in the 100 free with a time of 54.33.

RELAY RESULTS
Wayne State was the runner-up in the 400 medley relay (3:57.00).  The quartet included Michalski as the lead off, Koh, Groteler, and Durack as the anchor.

FROM COACH PETERS
“WSU swam really well against a very strong opponent tonight,” commented head coach Sean Peters.  “I know the score tells one story, but the story that I took from it was that we saw quite a bit of improvement from last week.  The Warriors continue to give it everything they have with training and performances.  Ryan and the gang of sprinters swam a strong meet.  Additionally, I felt that Ahmed Ahmed winning the 200 breaststroke and Joao Martimbianco Ribeiro having strong races overall were very impactful today.

“Some highlight performances tonight were our women backstrokers with Ashlen, Jordan and Maddy, and seeing their improvements.  I also thought Haley Groteler made some big strides as well.”