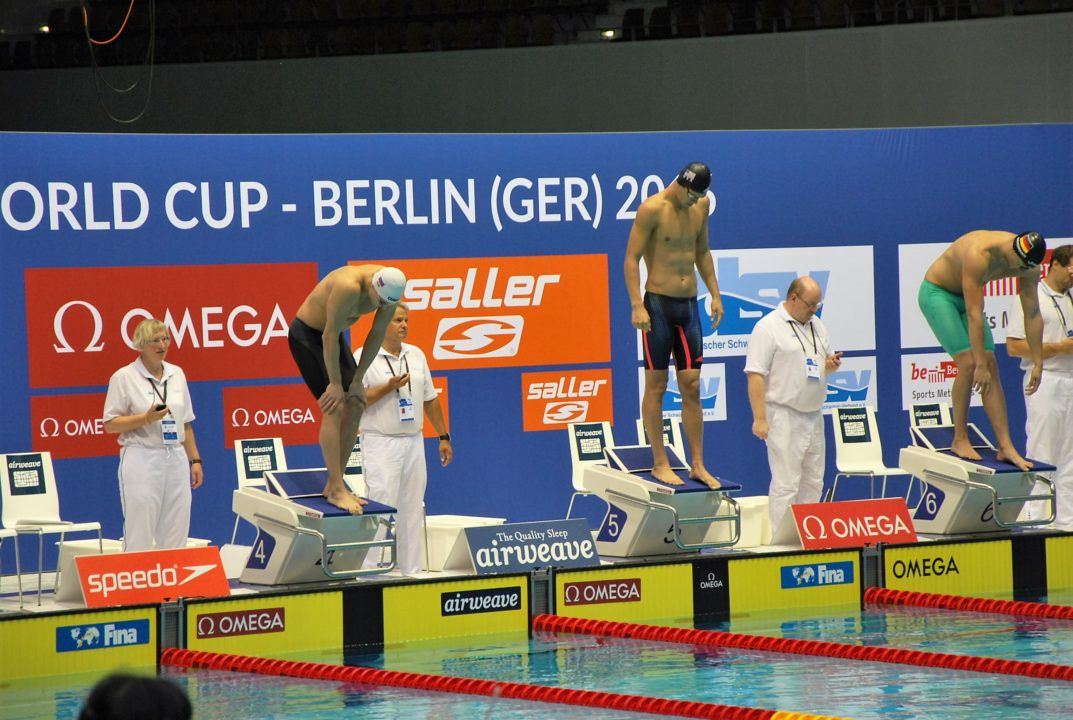 Pernille Blume will lead the Danish contingent into the Tokyo 2020 Games as defending champion in the women’s 50 freestyle.

The second and last day of the FINA World Cup again promises good races in the fast Berlin pool. Vladimir Morozov set a new world record yesterday in the 100m IM in 50,30.

The top seed in the men’s 100m butterfly is Chad le Clos who hit the wall in a time of 51,66. The next-fastest swim in the morning heats came from USA’s Tim Philips in 51,92.

I believe, I should say I heard his contract has incentives for JR World Records. Not saying they are more then the cash prizes at the stops, but he may be after records as well. Or he’s just like Ricky Bobby…

If Jr WRs are what he’s after, shouldn’t he limit the number of events he swim?

If he’s really serious about breaking one or two JR WRs, he knows what to do.

Ugh. I think I speak for many when I say the frustration at the mismanagement of Michael Andrew is heartbreaking. He should’ve been at Jr. Pan Pacs. He should be the top recruit for the class of 2017, about to start a promising collegiate career where a talented knowledgable diverse staff can help him reach his potential. Ugh. It’s just honestly difficult to watch this all unfold. And for those of you who may still be impressed with his results… All I can say is research the last couple of years of times. He needs a new coach! What worked for him as a 12-U may just not be enough anymore.

Did we watch the same Olympic Trials?

you have to look at improvement. A 0.86 drop in his best even ( 100 Breast ) is hardy impressive. He also swam slower at this year’s Jr nationals in that same even than he did a year ago! He actually was slower in MOST of his events at this year’s Jr nationals compared to last year’s. Take it a step further and go back 2 years…. You will find for the exception of if a couple events, the time improvement is minuscule in events he used to hold the NAG ( 100 fly, 100 back, 100 free). Compare that with some of the other rising talent whose improvement is several seconds over the last couple of years…I watched him… Read more »

first of all a .86 drop is ridiculously good, so save that nonsense…

secondly- are you trying to tell us that someone who’s no longer 14 has stopped going best times every meet??? what?!?!?! that’s unheard of!!!

seriously everything you just wrote is laughable. so some random kid you chose who is having his breakout season at 17/18 dropped more than MA this year. cool. MA had his breakout at 16. what’s the difference?

I mean- Phelps was SO much faster than Lochte at 15… were you making similar comparisons when Lochte ‘caught’ up to Phelps at 19/20?

you’ve got to do better than this.

I’m pretty sure I didn’t say dropping every meet was expected or the norm. What I DID say is while others in the 16-18 age range are making huge improvements and CLOSING the gap, MA is at a stand still in most of his events. This is a fact. This is not a good thing. And certainly not what you would expect for his age…

were you thinking he would ALWAYS be 4 seconds ahead of kids his age? in every event? that’s crazy unrealistic… he was always going to drop events (200s of stroke were the obvious choices)…

EVERY age group stud gets caught by the field at some point. i cannot understand the point you are trying to make here.

he was light years ahead of his peers at 14. but even then you see he was not 14 physically. he had coordination and power none of his peers had. and he has continued to get better, just not at the same rates as he did from 12-16… but nobody does. they all have 2-3 years of crazy drops and then… Read more »

I’m actually not saying .86 isn’t a nice drop… I’m pointing out that he hasn’t dropped significant time in the 100 free 100 back and 100 fly. Look at the past 2 years of those events. And for claiming 100 breast as best stroke… 200 breast should be stronger. It is simply my opinion that in if you look at times from The last couple of years, there is a lot of room for improvement that isn’t really happening. They’ll either figure it out or they won’t.

no matter what he does, people will move the goalposts…

if you had told these folks two years ago he’d be under 2min in the IM and under 1min in the 1BR by OT 2016, they’d have said that’s crazy talk and he’d crash and burn well before that.

1) He is a pro swimmer. He’s been to Jr National Team trips. What purpose does going to Jr Pan Pacs serve? He isn’t going to college (as much as that bothers you and others- it’s a fact) so the WC Circuit is his ‘future’…

He is basically a ‘freshman’ this year, taking his licks and learning. Why does he instantly need to be winning to be successful? He’s racing some big names and specialists who are in their 20’s.

2) I’ve said this before and I’ll say it again- this is an amazing experiment… why push for change? We have nothing invensted in this kid- we don’t coach him, he isn’t on our squad, etc.… Read more »

A college degree while not fool proof is definiteky a better investment with a higher rate of return than his odds of financial success in pro swimming. Not to mention a college degree from any top university in the US for free.

He can get a degree without swimming for a college. He doesn’t need to go to Stanford or Texas to be successful.

Wow really. Id love to see one, just one financial argument of how his going pro makes sense. How much money has he earned so far, this meet, etc. who is paying for his travel. What has he made. I’ve never read that. How much has he made? What is he going to make?I just can’t believe it’s very much considering he has done nothing at the world championship or Olympic level yet. If that changes that’s a different story but so far it hasn’t.

The experience of going to college: priceless

The potential connections from a school like Stanford or Cal: priceless and worth millions long term

he was never- NEVER- going to go the traditional college route. he didn’t even go to regular elementary or high school. what makes you think the family was gonna all of a sudden say- gee, lets ship him off to swim at Texas?

this family is different. however you feel about their choices, they are THEIR choices to make. whether MA was a great swimmer or not, he probably wasn’t gonna go the traditional college route.

Not when he’s 18. It’s his choice to make and just his. If the NBA and NFL have rules for going pro for physical maturity/decision making in males….why shouldn’t swimming

He wouldn’t have gone to any of those. Peter and Tina have said before that traditional colleges are too liberal for them to send their children there. Regardless of the monetary value, he was never going to go there. You seem hung up on the financials of it all when that isn’t the deciding factor at all.

Exactly – there are many high level quality trainings out there in any domain possible … college or University is not for everybody . this is called diversity of the human kind

Yeah this 100%, also by turn pro MA will make his name in lcm and not scy. People remember phelps, ledecky legacy in the olympics , wc and lcm, not in scy.

Some people are probably afraid that a century talent is going to be wasted.

Not your problem at all – not even a second

Well said Hulk – i totally agree with this honest perspective !!! Let’s let him experience what he needs to learn and have fun with .

Why every swimmer in usa have to swim in ncaa ?
It is not work for everyone. Some people get the benefit some people dont, its easy. He turns pro and that is the path that he choose. We should just support it. His times last year and this year is still good. He still have a great future in 100 breast and of course in 200 im with no phelps and lochte. Also you say that he needs a new coach that is just plain stupid.

Michael Taylor placed 5th at Olympic trials as a 17 year old yet he is being praised for his performance. Michael Andrew gets 4th and everyone criticizes him. He’s doing very well for his age

Well, Michael Taylor didn’t go pro at 14. Therein lies the difference. Of course MA’s times are “good” for his age! But not for a pro. You go pro, there’s expectations from, well, everyone. I just keep thinking one word. Sad.

expectations to do what? he’s one of the top 4 americans in the 100m breaststroke. and he’s in the top 10 in a few other races.

what exactly are your expectations of pro swimmers? by that notion, david nolan isn’t ‘pro’ level…

you keep trying to apply ‘general’ things to this specific, unique swimmer.

Who could you possibly recommend as a new coach for MA? Seems to me the kid is mature, confident and very happy with where he is in his life. Why screw that up just to think someone else would put MA’s interest at heart? I think if you talk to some of the coaches around the circuit who know Pete and Michael, they believe he’s doing just fine.

It’s my opinion. I stand by it. We’ll check back in a year. If at least 1 to 2 same age or younger swimmers have not posted faster times, you can say “I told you so.” Swim fans are too sensitive. Similar fan sites for football or basketball people talk about athletes, make predictions, etc and people don’t get offended so easily. The dude went pro. If you can’t handle a fan critique or criticism you’re in the wrong profession.

and on those other sites, folks defend the same athletes, too… so take your own advice.

Looks like larkin is starting to return to form, 1:48 200m back ,not insane, but better