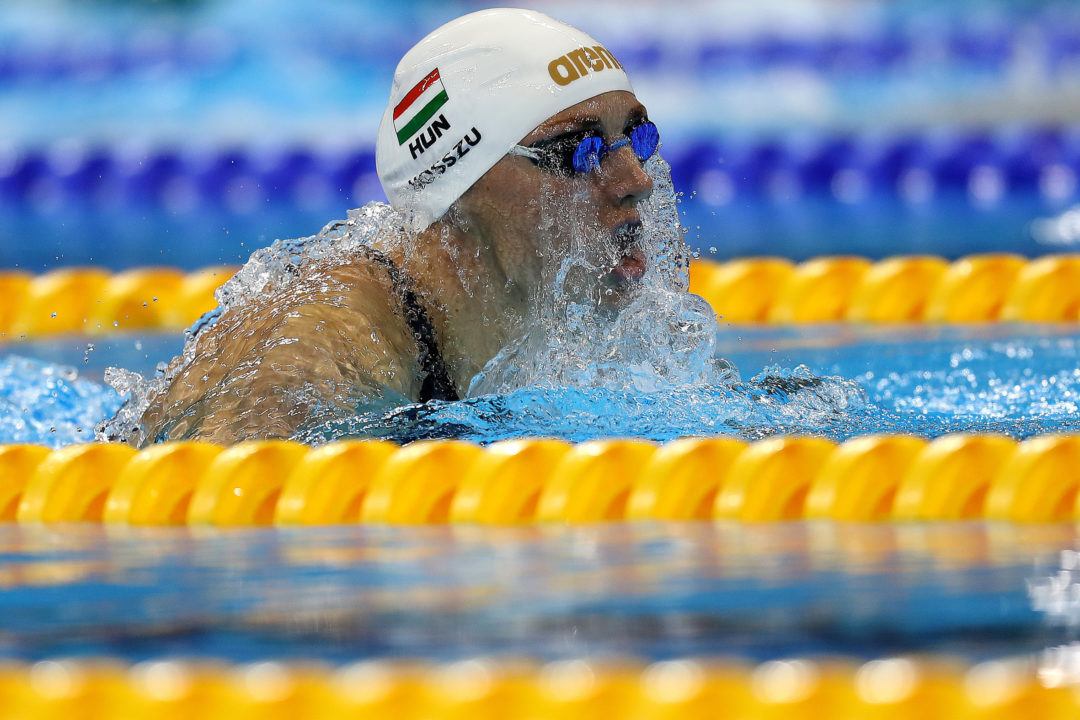 Katinka Hosszu ﻿is well on her way to a 6th-straight title on the FINA World Cup Series, leading all women by 53 points after the tour's first stop in Paris, France. Archive photo via Simone Castrovillari

Katinka Hosszu is well on her way to a 6th-straight title on the FINA World Cup Series, leading all women by 53 points after the tour’s first stop in Paris, France.

Coming off her first Olympic hardware haul a few weeks ago, Hosszu picked up 11 total medals while winning 7 events in Paris. She sits at 129 points for the early-season lead on the tour. Jamaican breaststroker Alia Atkinson is second at 76.

On the men’s side, Vladimir Morozov of Russia holds the early lead with 86 points, 26 up on former series champ Chad le Clos. The South African le Clos was the runner-up on the tour last year to his countryman Cameron van der Burgh and won back in 2014.

Here’s the top three in each gender, per a press release from FINA:

The tour continues on Tuesday and Wednesday in Berlin and Saturday and Sunday in Moscow, where Morozov will look to add to his points lead in front of a home crowd. That will conclude the first cluster, and the tour will pick back up again in late September.

25 meter races are very entertaining. Serious consideration needs to be given to building all new pools in the US as either 50 meters or 25 meters, with a bulkhead to shorten it to 25 yards if necessary. And, truly, is it really necessary to continue racing in 25 yard pools?

We have plenty of excitement in SCY. It’s not that it’s necessary, but it makes sense. Most of our pools are SCY, and even if we started now it would take decades for enough SCM pools to be built to become the new standard. And every time a new pool is being designed people will ask why spend the extra money for SCM when USAS, YMCA, NCAA, high school, and others are still on SCY?
It’s like in the 80s when there was a push for the whole country to go metric. It’s expensive and has very little benefit.

Moveable bulkhead pools make it easy if you really want to. But I seriously doubt FINA is going to bring their money show to the U.S. it would be great to have big pro spectator events especially right after the Olympics.

I think yards races are even more exciting than scm. Personally, I only wish FINA would recognize yards times and that other nations would compete more often in yards (even if only occasionally on a trip to the US).

It is awesome that so much swimming from around the world is available for viewing. It’s a far cry from when I was a kid and you had to physically be at the meet to watch any swimming. Unfortunate that more Americans are not competing in the World Cup. Prize money? For swimming? Are you serious? SwimSwam please provide a list of the money rankings, too!