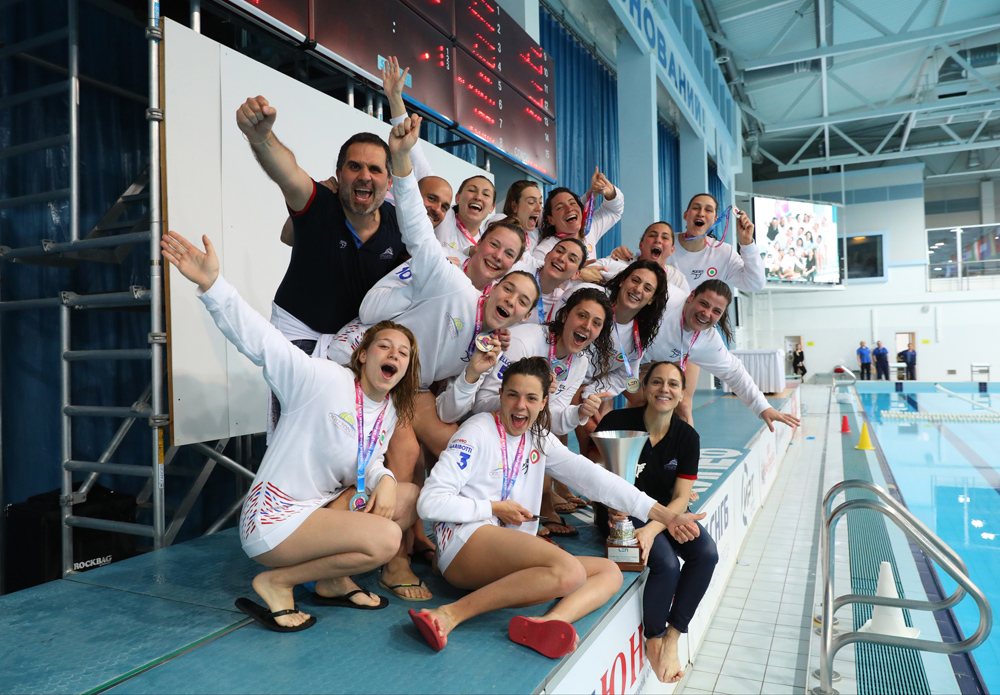 2019 Super Cup winner and 8-time champion Orizzonte is the big casualty of the qualification round. Archive photo via LEN Media, Stas Levshin

Brescia also four wins in as many matches in Budapest as they defended brilliantly and kept title-holder Ferencvaros to 6 goals on the closing day.

After downing Olympiacos two days ago, Marseille added Jug to its list of casualties by beating the Croats in an epic 28-goal game.

Two teams from Russia, Hungary and Spain respectively and one from Italy and Greece apiece advanced to the quarter-finals. 2019 Super Cup winner and 8-time champion Orizzonte is the big casualty of the qualification round.

Orizzonte did not survive the qualifications – the Italian giant could climb back from 6-8 down to save its game to a draw against host UVSE Budapest (HUN) but then lost to Uralochka (RUS), thanks to a brilliant first half (7-2) by the Russians. UVSE finished atop in Group A as the Hungarians staged an incredible finish against Uralochka by producing a 5-0 rush in the last six minutes to win this epic match 16-14, after being 11-14 down.

The other Russian side Kinef was the only one in the weekend, which could win all four matches. The 2016 and 2017 champion had a couple of tough battles in Group B but clinched victories against Mataro (ESP) and Ferencvaros (HUN) – in the latter game the Russian winner came 34 seconds from time (15-14). Mataro claimed the second qualifying spot as they earned a fine 13-9 win over the Hungarians.

Two single-goal wins and a draw put host Roma (ITA) through in Group C, while 2019 runner-up Olympiacos (GRE) could beat the other Italian Padova 10-7 to make the cut as well. Here Olympique Nice was disqualified before the start as the French seriously breached the relevant LEN rules applied for a bubble tournament (after the mandatory PCR tests they played a training game against a non-tested Italian side, shortly before trying to enter the bubble).

After a withdraw only three teams remained in Group D – the title-holder from 2019 Sabadell (ESP) beat 2018 Super Cup winner Dunaujvaros (HUN) and drew with Vouliagmeni (GRE) to finish atop. The Hungarians then edged out the Greeks 11-9 to join the top flight once more.

The draw was made in Verona, site of the Group B and D matches – the highlight of the quarter-finals is surely the clash of Sabadell and Olympiacos, the rematch of the 2019 final.

Draw for the quarter-finals