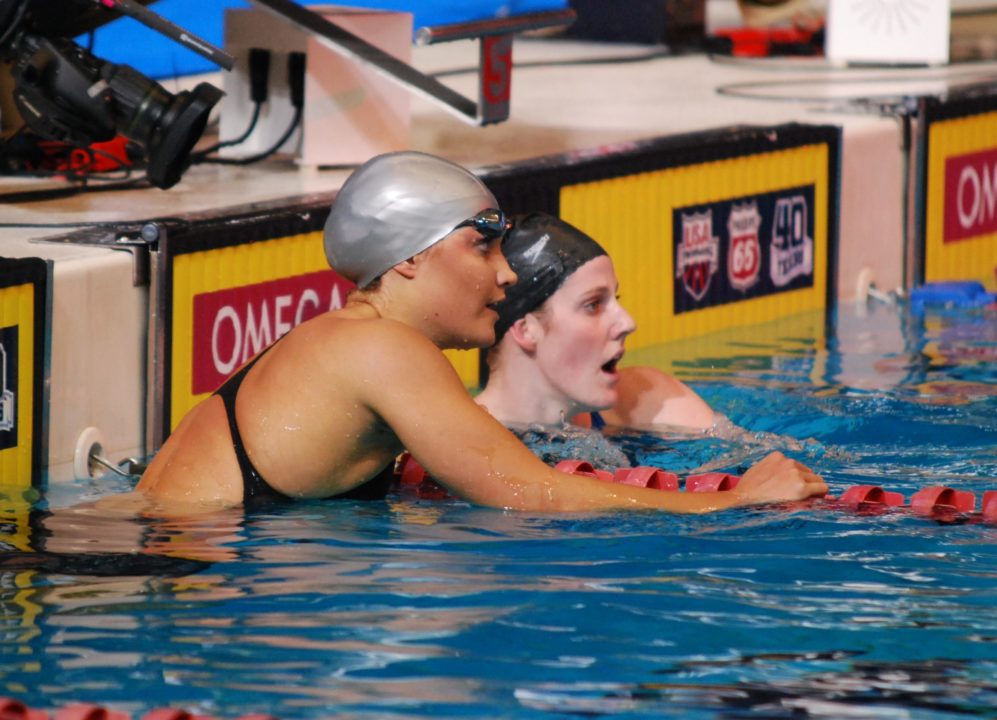 Teammates Liz Pelton and Missy Franklin will go head-to-head tonight in the 200 back final. Archive photo via Tim Binning/TheSwimPictures.com

The final day of the AT&T Winter National Championships will feature the 200 back, 100 free, 200 breast, and 200 fly, plus the 1650 with heats during the day and the final heat at night and the 400 free relay added in for the finals session.

Cal’s crazy backstroke group will return after putting up the top 5 times in the 100 last night. 50 free champ Nathan Adrian, 100 fly champ Matt Grevers and 200 free champ Joao de Lucca will each head a heat of the 100 free, setting up a massive showdown at finals. And former NCAA champs Haley Spencer and Caitlin Leverenz sit on the top two seeds in the women’s 200 breaststroke.

Liz Pelton will enter the final with the top seed in an event where the Cal Bears put 5 swimmers into the A final. Pelton, the current American record-holder, cruised to a 1:51.75 prelims swim to take the top spot easily over Missy Franklin (1:53.27). Franklin just beat out Brooklyn Snodgrass of Indiana (1:53.34) for the 2-seed. Melani Klaren is fourth for Cal, followed by Indiana’s Cynthia Pammett and Cal’s Stephanie Au and Sophia Batchelor.

We had a tie for 8th place, setting up a potential swim-off between Alexandra Day of Indiana and NCAP star Janet Hu. A win by Day would make a national final of all California and Indiana swimmers, but Hu has been a national title contender in several events so far this weekend.

Matthew Josa of Division II Queens University is sixth after breaking a Division II national record, and Grigory Tarasevich (Louisville) and Jacob Pebley (Cal) round out the A final.

Matt Grevers, who won the 100 fly and was under the American record in a runner-up 100 back performance last night, finished 12th overall in 1:43.95.

After her 100 freestyle win Thursday, Natalie Coughlin looks to be finding even more success in her late-career transition to sprint freestyle. The 31-year-old former backstroker took the top seed in the 100 free, going 47.58. She’ll be followed closely by fellow pro Amanda Weir, though, who was just a tenth behind in 47.68. Arianna Vanderpool-Wallace sits third and California’s Missy Franklin is the top collegiate seed, going 48.19 for fourth.

Liz Pelton, coming off a 200 backstroke in which she took the top seed, was only able to place 9th here. She’ll lead a B final that includes some big names like Tennessee’s Faith Johnson, Cal’s Kaylin Bin and NCAP star Katie Ledecky.

American record-holder Nathan Adrian took the top seed in the men’s 100 free by just .01 over Adam Brown. Adrian was 42.03, Brown 42.04. Not far behind was South African Darian Townsend, who went 42.41 for the 3-seed. Josh Schneider was also 42.4, sitting fourth going into tonight. Louisville’s Joao de Lucca, who won the 200 free last night, and Tuscon Ford pro Matt Grevers, the 100 fly champ, will be the next two seeds – Grevers beat out Karl Krug by just .01. Nicholas Soedel of Utah will round out a A final in which all 8 swimmers are separated by only seven tenths of a second.

In a testament to how fast and deep this field is, Olympian Cullen Jones missed the A final, taking 9th, and he’ll compete in a consol field that includes pro Dax Hill and college stars Tyler Messerschmidt, Bruno Ortiz, Tim Phillips and Seth Stubblefield.

100 breast champion Alia Atkinson took the top spot in the 200 breast this morning, going 2:05.63, just .3 off of the meet record. She’s the top seed by a sizable margin – SwimMAC post-grad Micah Lawrence was 2:10.59 for the 2-seed, just ahead of Bronwyn Pasloski of Indiana who went 2:10.74. This event had 10 swimmers under 2:12, setting up a very tightly-bunched A final behind Atkinson. Stina Colleou, Maria Garcia, Angela Chokran, Haley Spencer and Justine Mueller will all swim in the A final, those 5 separated by just four tenths of a second.

Tennesse’s Molly Hannis just missed out on the A final, taking 9th in 2:11.70, just .02 out of a spot in the championship heat. Former Columbia star Katie Meili will swim next to Hannis in the B after taking 10th.

Cal post-grad Caitlin Leverenz scratched out of the event this morning.

The swim-off for 8th place in the 200 back took place just before the men’s 200 breast kicked off. NCAP star and future Stanford Cardinal Janet Hu won the swim-off thanks to a  huge front 100, and both swimmers went about 2 seconds faster than prelims. Hu’s 1:54.08 will put her in the A final, while Indiana’s Alexandria Day went 1:54.98 and will head up the B heat. Both women were 1:56.60 in their prelims swim earlier this morning.

Former Harvard swimmer and incoming Cal transfer Chuck Katis will enter the final of the 200 breast with the top seed after winning his prelims heat with a time of 1:55.26. Louisville’s Addison Bray posted his second lifetime-best of the meet, going 1:55.27 to grab the 2 seed. Former Tennessee Volunteer Brad Craig finished second in Bray’s heat and will sit third overall, and Michigan’s Richard Funk was the fourth swimmer to go 1:55 this morning and will be fourth.

Louisville’s Kameron Chastain sits fifth, Cal’s Josh Prenot sixth, and Trojan Swim Club’s Mike Alexandrov seventh. The defending Big Ten champ, Cody Miller of Indiana grabbed the last spot in the A final – his 1:57.09 was a good 6 seconds off his lifetime best, but he typically saves his best swimming for February and March.

Though California put three swimmers in the A final of the 100 fly, it was Louisville’s Kelsi Worrell who took home the top seed, going  a lifetime-best 1:54.82. The sophomore is a fast-riser in this race, coming into this season with a lifetime best of only 2:01.2. She’s a big-time 100 flyer for the Cardinals, but swam the 50 and 100 frees as a freshman. Races like this might turn her into a full-time, all-distance butterflyer by conference time.

The second seed is Rachel Bootsma of Cal, and following her is Cal postgrad Caitlin Leverenz. Both went 1:56s this morning, as did Indiana’s Brenna Maclean. 100 fly champ Claire Donahue sits fifth, followed by Cal’s Sophia Batchelor, Indiana’s Gia Dalesandro and Schroeder YMCA/Kenyon post-grad Hannah Saiz to round out the A final for tonight.

Cal’s Celina Li was a bit off her pace this morning, going 1:59.02 and qualifying 12th. She’ll swim in the B final tonight.

Michigan sophomore Dylan Bosch took the top seed in the 200 fly, going 1:42.95 to put himself in line for a national title tonight. Second seed is NCAP’s Andrew Seliskar, who took another few hundredths off his lifetime best. His time of 1:44.42 is still a ways off the 17-18 NAG record of 1:41.52 held by Tom Shields, though. Just a tenth behind Seliskar is Alexandru Coci of Arizona State, and another tenth back is 4-seed Will Hamilton, swimming unattached-Cal.

Rounding out the A final are two Michigan Wolverines (Kyle Whitaker, John Wojciechowski) and two Cal Golden Bears (Josh Prenot, Marcin Tarczynski). Michigan’s Peter Brumm would have been an A finalist had he not been disqualified out of the final heat.

The day will continue with heats of the men’s and women’s miles (which should include U.S. Olympians Katie Ledecky and Connor Jaeger) before the last session of the meet, tonight’s finals. The last session will feature the same events as this morning with the addition of the 1650 and the 400 free relay.

That was a loaded men’s 100 free. Only 2 collegiate swimmers made the A-Final.

Live Results not working for anyone else?