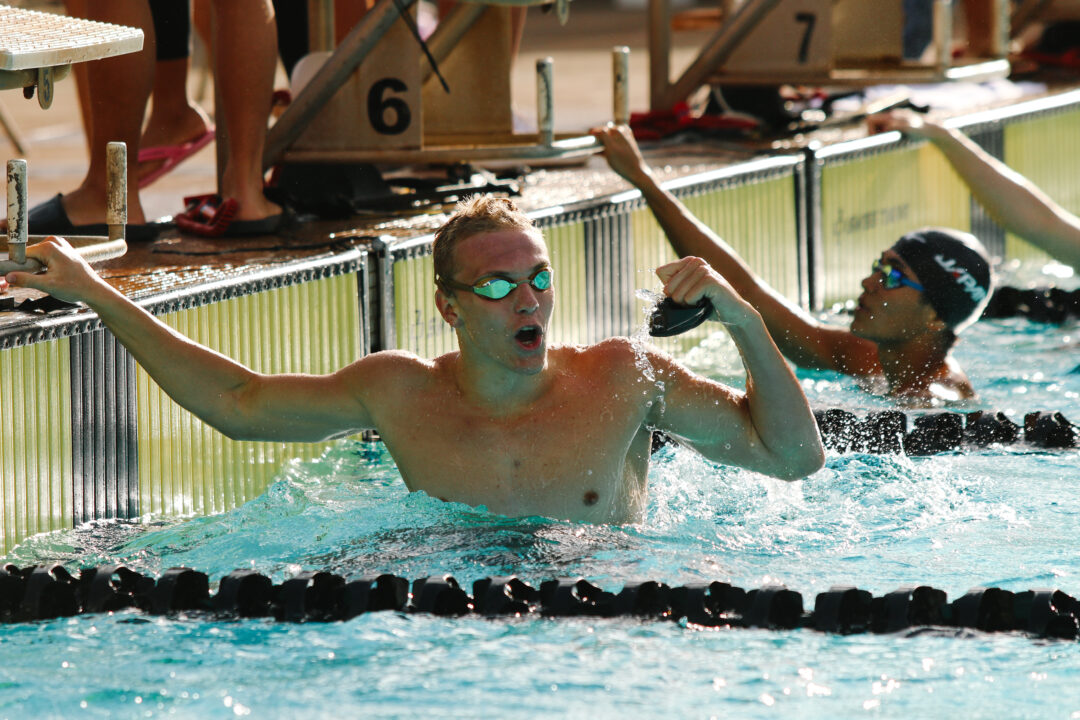 After breaking the 15-16 NAG last night in the 200 free, Maximus Williamson returns this morning in the 200 IM and 50 free. Archive photo via Jon Reiter

This morning’s session in Austin will feature the prelims session of the 500 free, 200 IM, and 50 free.

One notable difference from the psych sheet to heat sheets in the 500 is that Texas’ Alec Enyeart is a late addition to the 500 free and will be the 2nd seed at 4:14.21 behind Rex Maurer (4:13.90). Enyeart is coming off a highly successful showing at the Minnesota Invite last weekend, where he set personal bests in all of his events, including the 500.

For the women, Izzy Enz is the only prelims scratch out of the top 24. She was seeded 18th overall. The 500 is looking like it will be a Sandpiper showdown, with Bella Sims, Katie Grimes, and Claire Weinstein entering the meet as the top three. Kayla Han could break that trio up, as she comes in 4th entered less than a second behind Weinstein.

The only change to the top 24 in the boys 200 IM is that there is another Texas addition, with Spencer Aurnou-Rhees coming in as the 4th seed with a time of 1:45.41, which he set last weekend at the Minnesota Invite. After a record-breaking performance last night in his 200 freestyle lead-off leg, Maximus Williamson comes in this morning seeded over a second ahead of the rest of the field.

In the 50 free, 6th seed Nathaniel Germonprez and 16th seed Chase Mueller are both absent. The rest of the top 24 is unchanged, with Diggory Dillingham entered first with a 19.52. There are six athletes in total entered under 20.0.

Rebecca Diaconescu is a late entry in the girls 50 free, coming in as the 5th seed at 22.64. Hailey Tierney is entered as the top seed in this event with a 21.84. Tierney had a breakout meet at the WIAA State Championships last month, and will look to replicate or better her performances at this meet.