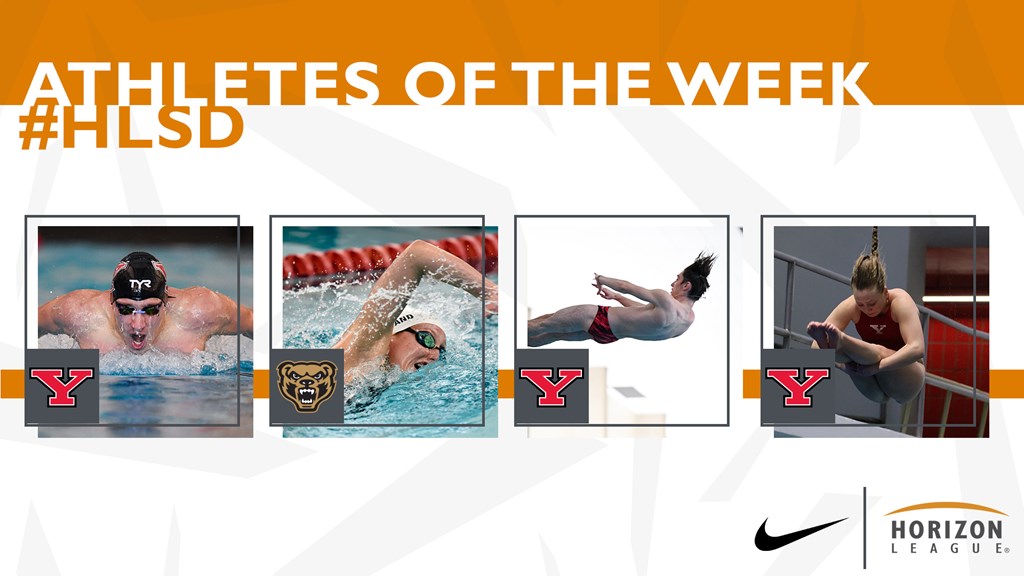 INDIANAPOLIS (December 7, 2022) – Youngstown State’s Aleksa Radenovic and Oakland’s Susan LaGrand pick up the first Nike® #HLSD Swimmer of the Week awards after the holiday. Radenovic earned his third weekly award of the season with his school record breaking performances in the Miami (OH) Invitational. He placed first in the 100-yard fly and second in the 200-yard fly and IM events.  He finished in the top five percent in Division I with his 200-yard fly performance. LaGrand wins her second title of the season with her impressive showing in the Zippy Invitational. She placed in the top five percent in Division I with a time of 4.15.69 in the 400-yard IM, which is a personal best, and top ten percent in the 200-yard back, which was a school record. Youngstown State’s Cody Thill and Kayla Wrasman sweep the first Nike® #HLSD Diver of the Week awards after the holiday. Thill earns his first DOTW award after his solid performance in both the one and three meter dives with scores of 231.35 and 235.95 respectively. Wrasman adds her second DOTW award to her resume with her top-ten finishes in both diving events, with a score of 230.60 in the one-meter and a 231.10 in the three-meter.

MEN’S SWIMMER OF THE WEEK | ALEKSA RADENOVIC | YOUNGSTOWN STATE | SOPHOMORE | SOMBIR, SERBIA
Radenovic broke three individual school records and was a member of four record-breaking relay teams at the Miami (OH) Invitational.  In the 100 fly, Radenovic came in first place and set the program record with a time of 47.27. In the 200 fly, he set the record with a time of 1:44.97, placing second.  He also finished second in the 200 IM, clocking a 1:48.64 in his record-breaking performance.

WOMEN’S SWIMMER OF THE WEEK | SUSAN LAGRAND | OAKLAND | GRAD STUDENT | GRAND RAPIDS, MICH.
Susan LaGrand swam in the Zippy Invitational alongside the Golden Grizzlies with incredible performances setting personal bests in the 400-yard IM (4:15.69) and a school record the backstroke with a remarkably fast 1:57.33 performance in the 200-yard backstroke. Additionally, she completed a leg on the A relay team that gave the women’s team an edge in the invite over the weekend.