Which Men’s Teams Move Up and Which Move Down at the NCAA Championships? (2022) 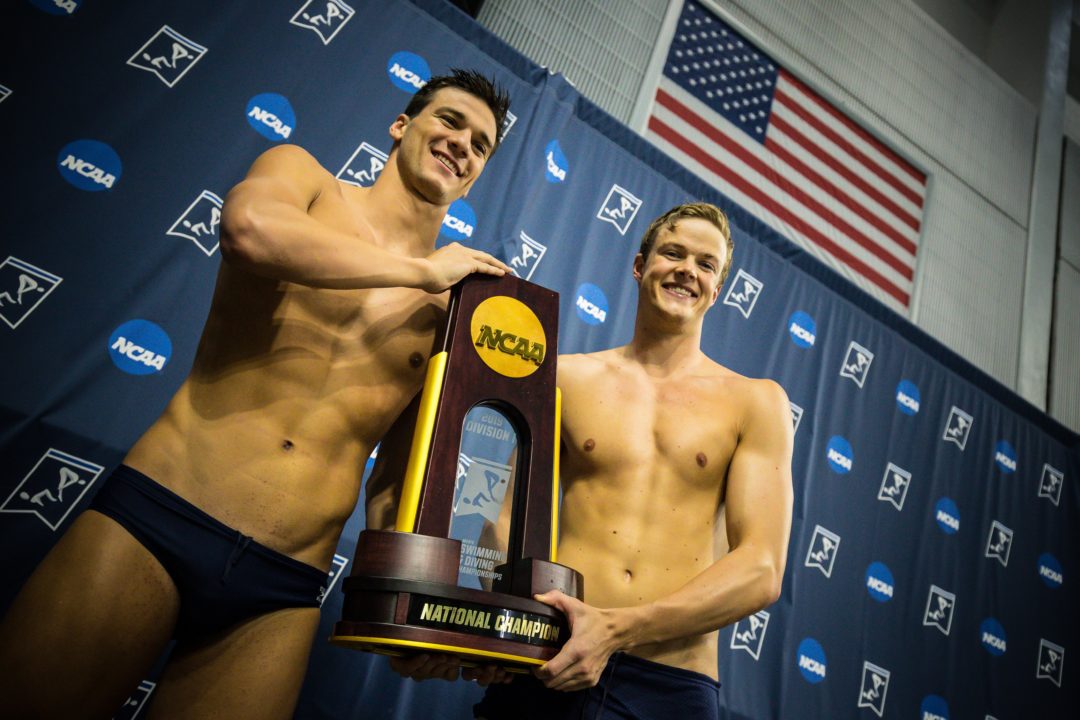 The Cal Golden Bears men last won the NCAA title in 2019, but have consistently jumped the most from seed to NCAAs in recent years. Archive photo via Jack Spitser/Spitser Photography

In anticipation of the 2021 Men’s NCAA Swimming & Diving Championships, we’ve scored out the psych sheets. But exactly how much does that tell us?

Our chart below averages the 2019, 2018 and 2017 seasons, with each team’s gain/loss from seeded points listed. The 2020 meet is missing, as the actual NCAA meet itself was canceled amid the coronavirus pandemic.

For those on mobile or who can’t see the embedded sheet above:

Maybe not enough data, but I’d be interested how teams compare who are swimming in their own time zone vs not.

Would be interested to see this as a percentage gain or loss (maybe limited to teams that score at least 50 points at each meet).

You have to be listed with Projected points to lose them. In the middle are the small scoring teams. Texas and Cal seem to hold back at the Conference level with great swimmers being able to do that. ASU went for it at the conference meet, can they come close to holding it?

Did the women’s meet change your expectations for the ASU men this week? What about for Florida?

For me, not really. The women are in a very different situation from the men at both schools. The Florida women performed very well, but a lot of that was thanks to newcomers who joined the team second semester. And, we already had high expectations of the Florida men – the women’s awesome performance doesn’t lead me to believe that Florida can jump Cal or Texas for 2nd, so I pretty much have the same expectation of them: 3rd place.

Arizona State was pretty much Emma Nordin. No, she didn’t swim well, but that’s a very different place from where the Arizona State men are at with a full roster and lots of top seeds. I think ASU men will… Read more »

UF had two newcomers. Elettra Neroni who is a diver and did not make NCAAs, and Ekaterina Nikonova who is a swimmer and scored on relays. So only one impacted them at NCs, and she isn’t even the team’s leading scorer. They did well at NCs as a TEAM effort.

Do Erica Laning and Lindsay Looney from ASU ring a bell? They both finaled in their best events. It’s not JUST Emma Nordin there (although she had put up some stellar times).

I guess my point was – that Emma Nordin was the only one who didn’t swim well, but because she’s far-and-away their star, people noticed it.

Lindsay and Erica both dropped time at NCAAs.

Where are all the PAC-12 complainers “OMG why does conference start so late, it HURTS us”… Then looks at the stats and the biggest upwards movers are PAC schools lol

Meets aren’t swam on paper, folks. Cal should put up hefty points during the last day of the meet though. Can Texas hold them off?

It looks like Texas entered only 2 divers per the entries on DiveMeet – Harness and Duperre. First time I can remember that they chose to leave qualified divers home.

Given UVA’s massive jump from seed to actual points at 2021 NCAAs coupled with the Virginia women’s domination last week, I’d say they’re going to be a pretty fun team to watch

UVA could surprise people in their sprint free relays.

This NCAAs feels much more open to upsets/surprise winners/surprise podium finishes than in years past. I feel like any of the top 12 guys in the 50 free could easily win. And then the 100 back is wide open as well. Really excited for this week