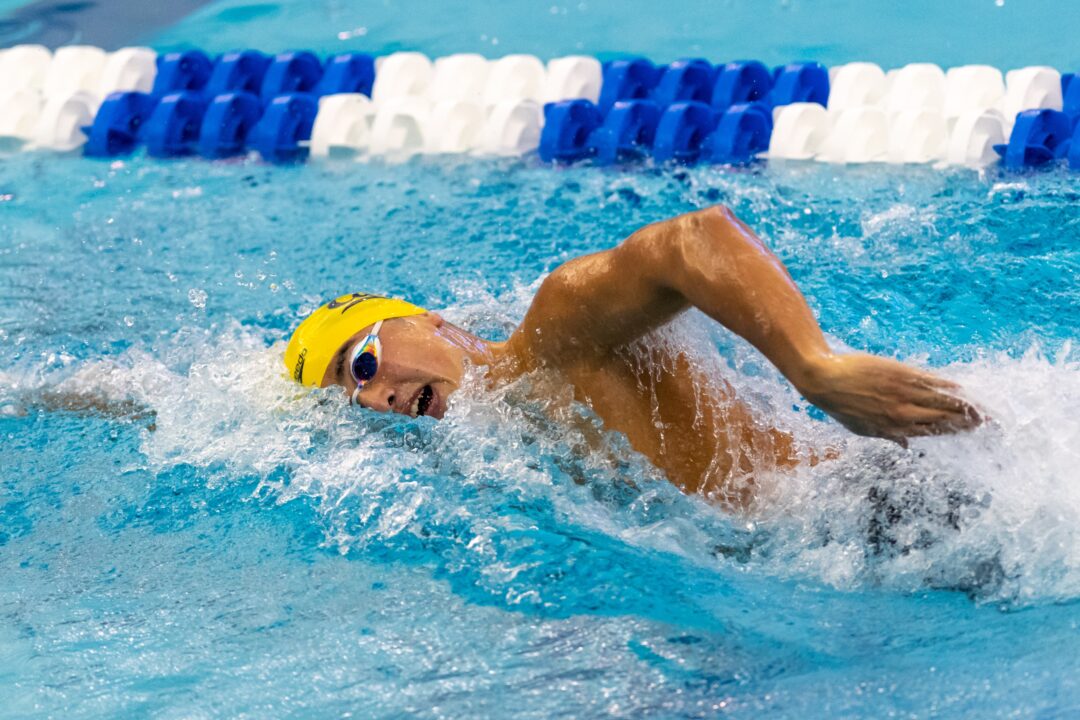 In this post, we're breaking down the scored psych sheets for the meet. Stock photo via NCAA Photos

Below, you’ll find the psych sheet scored out. Please keep in mind that this does not include diving.

A big thank you to Andrew Mering for running the numbers.

Alright. So, Cal is leading the scored psych sheet over Texas by a slim margin. Texas has a diving advantage over Cal, although with the absence of Jordan Windle, one of the top divers in the NCAA, that advantage is less significant than in previous years.

Another interesting aspect of the projected scoring is just how few relay points Cal is seeded to score. It’s not terribly surprising, since Cal’s relays outside of the 200 free and 400 free at Pac-12 didn’t perform as fast as we thought they could have. The reason it’s notable that Cal is seeded so lowly in relays is because it leaves room for Cal to potentially improve versus their projected scoring.

One other thing to note: Texas will have to cut one of their swimmers from the roster at some point today, although it’s highly unlikely doing so will affect the scoring..

Diving wasn’t scored but don’t let that stop you from making your observations.

The only question really is whether Texas freshmen alone score for top 10 (including quarter of points of each relay one of them is in). Otherwise, Texas wins and every Texas swimmer score, like last year.

Not saying it matters, but Texas diving is not as good as in recent years!

Of all the teams and swimmers and events, that was my only question as well

This was a no-brainer before the Winkle loss.
Now, it will be much more interesting, for sure.
I still think the Texas divers score 30+ points.
Also, Texas won’t outscore California by 18 in
the relays, either. Literally could come down to the last event.

Oops. The loss of Windle.

It’s pronounced Winklevoss and they are former rowers from Harvard. Not sure how Zuck stealing the Facebook from them has any impact on a swimming championship.

If it comes down to the final relay then it puts a lot of pressure of Durden and the Cal staff to choose the right lineup. For Texas the four guys are probably set, but besides Seeliger and Alexy, Cal has decisions to make. I think in the end they will go with Hugo and Lasco, but I wouldn’t want to be the guy who says no to Hawk, Carr, or Hanson.

Interestingly, all three teams that look like they will qualify 18 only have 11 swimmers seeded to score.

More room to move up for those teams!

There’s no way Cal’s big scorers were fully rested. Grieshop always shows up for NCAAs, and guys like Mefford, Carr, Julian, Lasco will improve from some of their seeds

Judging all of the facial hair on Lasco, I would say the only rest he got is when he went to bed at night. The dude is ready for NCAA’s. He’s breaking the NCAA record in the 2 back this year.

Lasco dropped a ton of time from PACs to NCs last year. Would not bet against him in the 200 back and think he’ll make it interesting in the 200 IM

if cal was rested for pac 12s I feel like they probably would have taken the lead before the last day.. that might just be me though

Got to make sure you win the conference at the expense of the national title. Love that logic

This could be the single most uninformed statement ever made on SwimSwam. And that is saying something.