What Led to Sjöström’s Successful Summer? 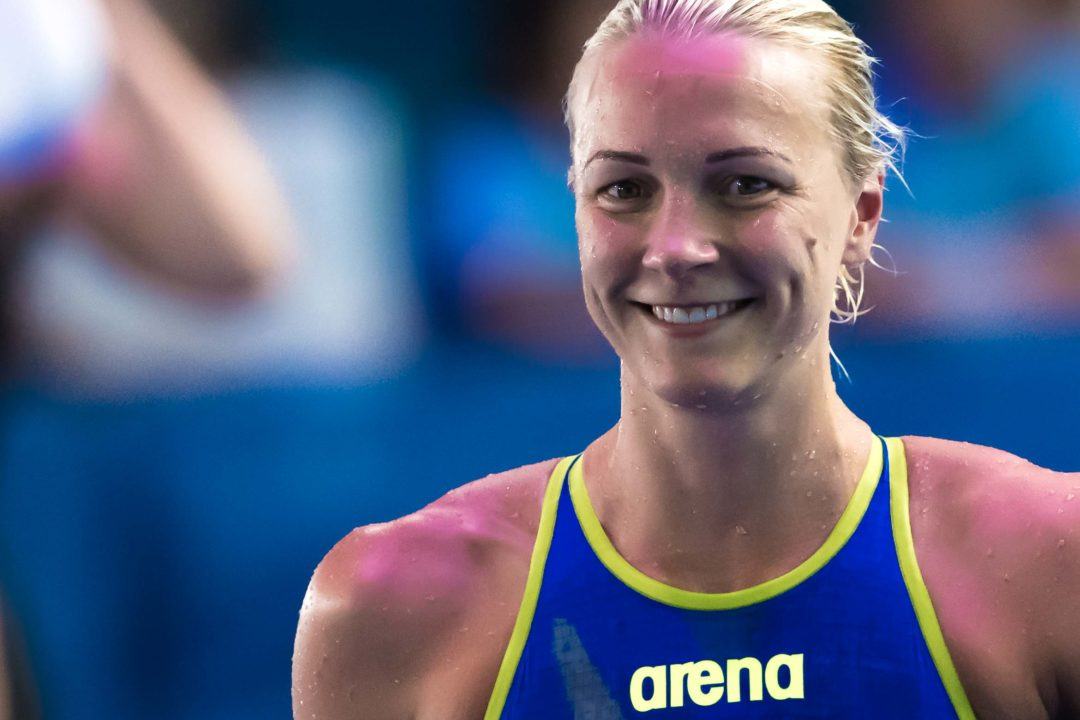 Sjöström's accomplishments have been the result of her training and applying lessons learned through several disappointments... Current photo via Mike Lewis/Ola Vista Photography

Swedish swimming superstar Sarah Sjöström has achieved a lot in her swimming her career, which included a number of truly magnificent performances this summer. Her accomplishments this summer were a combination of her training and applying the lessons learned from disappointments she has experienced on her path to success.

Then came the World Cup events in Moscow, Berlin and Eindhoven. At the conclusion of the three events Sjöström had tallied 266 points to lead the World Cup rankings by 90 points over Hungarian Katinka Hosszu. In the process she set the world record in the 100 freestyle twice, once in Moscow and then again in Eindhoven, and finished off the series by breaking the world record in the 200 freestyle.

She also set the 50 freestyle world record in Moscow, which was surpassed by Ranomi Kromowidjojo of the Netherlands.

“It was a very good summer,” Sjostrom said with a chuckle. “It was very surprising.”

At the 2016 Olympics in Rio she won the 100 butterfly in a world record time and added a bronze in the 100 freestyle. After that success there has been a lot of expectations put on her by others which is one reason she sees no need to put them on herself.

“I don’t have any expectations on myself,” Sjöström told SwimSwam. “It helps with the pressure from the outside.”

She has lofty goals, but expecting results is something very different, “I don’t expect to win gold medals and break world records. It is more fun that way.”

Of all of her accomplishments this summer the one that stands out the most is the 200 freestyle in Eindhoven,  “It was after a bad 50 butterfly, it was the last event of the meet and I just wanted to get it over with. It felt great to have that comeback. It was a really big surprise especially after making the decision to not swim it in Budapest.”

One of the keys to Sjöström’s success throughout her career has been her ability to refocus after both a disappointing race or a successful one, “When I have a disappointing event I refocus really quickly.”

She feels the amount of racing involved in the World Cup is a great way to develop that skill, “It is always about refocusing. It is a lot of racing.”

“It is the same with success you have to refocus really fast especially when you do that many events. For example Katinka (Hosszu) also does a lot of racing. She has been a really big inspiration for me, I don’t do that much of course, but for me to do as much racing as I have done.”

“It is really fun. It is easier to refocus after a success than after a disappointment of course.”

That changed in 2013 when she collected gold in the 100 butterfly at the World Championships which ultimately became the first of three consecutive World Championship victories in the event. She also won the same event at the Rio Olympics.

“I learned that success is not the only part of being an athlete. The second part is the disappointments. I had to learn to handle both.”

“It is part of being an athlete having success and also having disappointment. Sometimes it can be even more inspiring as an athlete to have some success when you have had a disappointment and come back after that.”

“Those athletes are the most inspiring to me. It is really cool to see all the athletes that can come back again after a tough time. After an injury or something like that.”

In a never ending quest to find new ways to improve Sjöström made a decision to change coaches after Rio leaving Carl Jenner to train with Johan Wallberg.

With Wallberg her the training has taken on a different focus, “The main change is I went from middle distance training to sprint training.”

The biggest change in her technique has been the concentration on distance per stroke, “Before I was kind of digging myself through the water it was all about the frequency. Now I work on the distance per stroke. Everyday I am counting my stroke. I am always counting and trying to make my stroke longer.”

“It has really helped my freestyle. I improved my 100 freestyle by one second this year. So that may be the key to making my freestyle a little bit better.”

She commented in a very understated manner, “It is very good.”

Sjostrom currently has eight sessions a week in the water which average 5km. She also does two gym sessions and one pilates session each week.

Pilates is one thing that Sjöström has found to be extremely helpful in developing core strength and flexibility as well as being a key to preventing injury.

“I did a lot of pilates before Budapest. It is a lot of control and a lot of repetition. You move more slowly and try to connect with your muscles. I didn’t even think I had some of those muscles.”

“(It develops) flexibility which I also need. I am very tall and had some problems with my back a few years ago. It really helps me get more flexible and stronger too.”

At first she wasn’t sure what she had gotten herself into, but quickly found that it was a lot harder than it looked.

“After my first pilates session I slept for about three hours. I didn’t feel tired during the training. I thought what is this, this is training? Then I came home and started to relax and was like okay I need a nap.”

As anyone who follows her on Instagram knows she will also sneak in a little climbing anytime she can. She fell in love with the sport after her boyfriend introduced her to it, “My boyfriend started climbing so I joined him and fell in love with climbing. I really like the climbing and I felt it helped me get stronger. Climbing is not part of my training program, but I really miss it.”

“When I have time for climbing I will go.”

She is by all accounts a beast at dryland training and has a strength/power to weight ratio that is without peer. I’m sure that helps.

Let me go way out on a limb here and say you missed a couple of things: great genes and great technique.

“I have also focused more on the freestyle technique in training.”