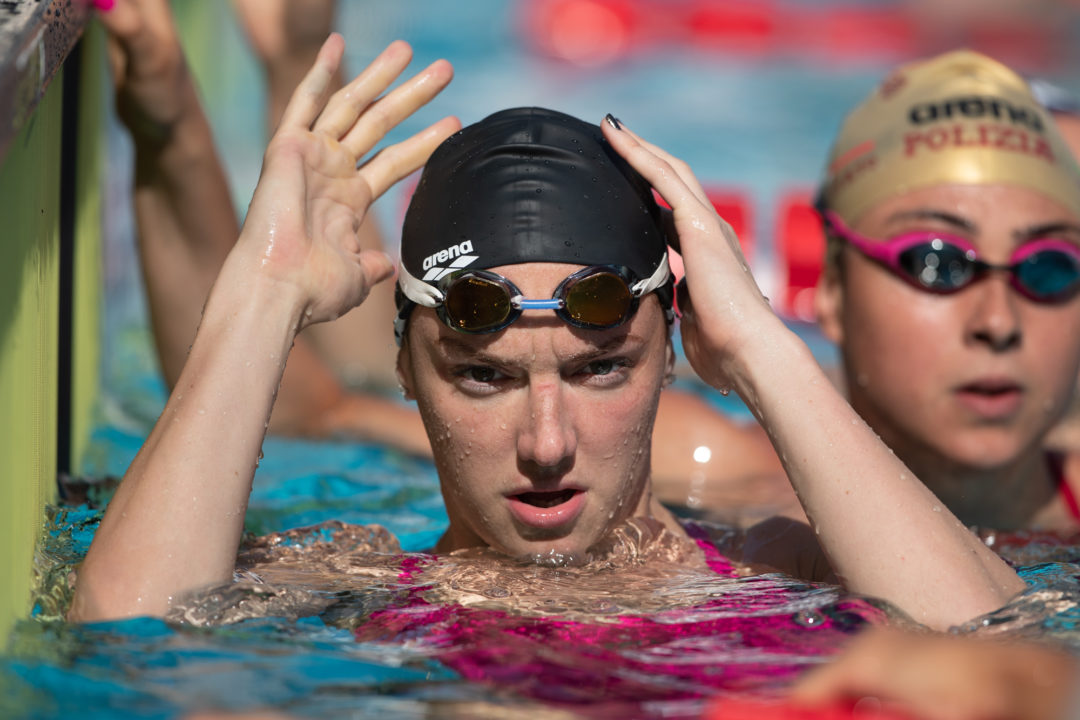 Watch the second trailer for Katinka The Movie which details the career of one of history's greatest swimmers. Katinka Hosszu. Archive photo via “Rafael/Domeyko Photography”

Jeremy Desplanches set a new Swiss Record of 1:56.17 in the final of the 200 IM at the 2020 Tokyo Olympics. He touched third for his first Olympic medal.

The second teaser trailer for Katinka The Movie has been released as is available to watch now. The film, produced, “Szupermodern Stúdió”, is a detailed account of Katinka Hosszu‘s early rise to prominence, her triple gold medal performance at the Rio 2016 Olympics, and her recent preparation for the Tokyo Olympics in the summer of 2021.

Trailer in Hungarian, but English subtitles are available.

The trailer reveals that the film will provide a glimpse into how Hosszu was required to adjust her training regimen when the COVID-19 pandemic brought about the long-term widespread cancellation of swimming competitions. Hosszu has long been known for her tendency to race frequently and far more than her fellow elite-level athletes, thus giving her the title of ‘Iron Lady’.

Hosszu remarks in the trailer that when competition had been suspended more an extended period of time, “it [felt] like [they] got some extra time. For everything really”, suggesting that she used the time to focus on training and on getting into shape heading into what would be another Olympic year.

The trailer then shows a clip of Hosszu racing at the International Swimming League’s 2020 season which took place in the fall of 2020 in her home country of Hungary. Hosszu was notably weak throughout ISL 2020 relative to her past performances on the international stage. Hosszu fell short in a number of races including many in which she was the world record holder at the time such as the 200 backstroke (Australia’s Kaylee McKeown has since lowered that mark), as well as in events in which she still holds the world records such as the 100 IM and 200 IM. The particular clip in the trailer shows a particular race from Match 9 when she came 4th to Yui Ohashi, Sakiko Shimizu, and Tessa Cieplucha in the 400 IM, swimming a 4:32.29 which was 13 seconds slower than her 4:19.46 PB from back in 2015. At that meet, Hosszu also wound up in last place in the 100 IM with a 59.83 compared to her world record of 56.51 which she set in 2017.

Hosszu gives candid feedback on her ISL 2020 performance, stating “I’m very pissed when I swim like this. This really lights the fire inside me” and goes on to say “it will feel much better to win again… to come back from here.” Hosszu recently delivered more promising results heading into the Olympic summer by winning a gold, silver, and bronze medal in the 400 IM, 200 fly, and 200 IM, respectively at the 2021 European Swimming Championships. While her peak performances would have landed Hosszu on top on all three of those podiums, it is likely that she was not fully tapered at Euros with only weeks to go until the Olympic Games. Hosszu is expected to compete for Hungary in Tokyo and will go in as defending champ in the 200 IM and 400 IM.

Katinka The Movie is set to be released in theaters in December of 2021.

This is wrong on soooo many levels

Sure, the levels you are talking about have to be detailed, but I’m not going to do so here unless you ask me to. But in my opinion there is something that unites these two swimmers. And I’m not talking about their real (not media fabricated) achievements in swimming and world records. Something that is indeed soooo wrong for the sport of swimming.

If I ask you a question “who is the most outstanding swimmer male/female of the 21st century?” you may find yourself in the difficult situation with the answer.
If I assign the project with the same title in the junior high school I will get the answer almost immediately. What can be easier? Just go to the FINA website and check the history of “The Best Swimmer Of The Year” award.
Do you know who deserved this highest recognition of the main international swimming body? Phelps? Ledecky? Sjostrom? Don’t be naive. You are making me laughing. I was better opinion about your expertise in competitive swimming.
Everybody prefer/deserve their own way to be fooled. Go ahead. Enjoy… Read more »

A great trailer but wish they would speak English…a bunch of gibberish.

Isn’t M. Dirado the defending champ in the 2 back?

Certainly she is the defening olympic champion. I think the article means SCM and not LCM.. There is no 100 IM in LCM.