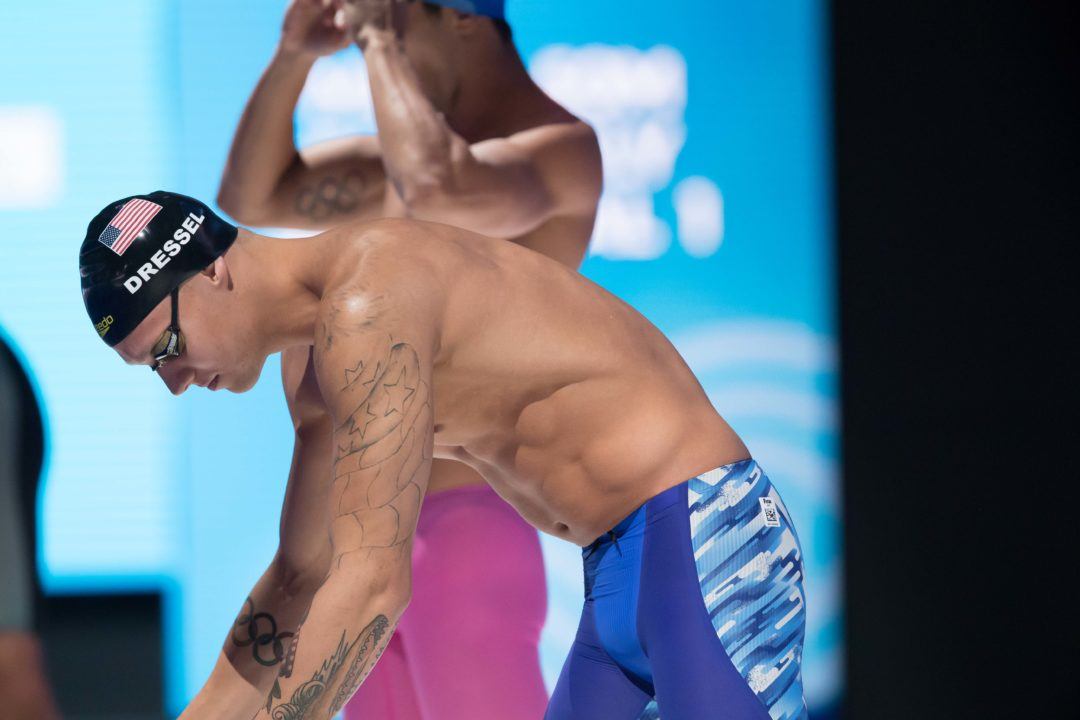 Caeleb Dressel. His spot in the limelight might begin at this meet. Current photo via Mike Lewis/Ola Vista Photography

Caeleb Dressel. His spot in the limelight might begin at this meet. He already blasted an American record in the 50 fly earlier in the session, and he then led off this relay with a 47.26, taking down David Walters’ American record in that, too. The Americans were out to a sizable lead thanks to Dressel, with Brazil on their tails the whole time. Things got dicey between Townley Haas‘s and Blake Pieroni‘s legs, and the pressure was definitely on for Nathan Adrian.

Diving in against Bruno Fratus, Adrian had a very small lead, and his anchor duty skills would be tested once again. Fratus kept it close, but Adrian muscled it out to the wall to give Team USA the gold at 3:10.06. Brazil settled for 2nd at 3:10.34, though Marcelo Chierighini had a 46.85 split.

Hungary came out of nowhere for the bronze– they were not medal contenders on paper before this meet started. Dominik Kozma broke his Hungarian record from prelims with a 48.26, and the heroic split from Richard Bohus (47.21) really made the difference for them.

Can we respect the fact that Dressel has a legitimate chance to win 7 Gold medals at this meet? Along with others such as Ledecky, Hosszu, so forth… But I think Dressel and Ledecky have the best chance at actually achieving that number of golds.

Ledecky can only win max of 6 golds.

Relay favors Dressel and Ledecky.. individually no one can get more than 4 and on that place Ledecky and Sjostrom seem to be more of a sure bet.. Katinka gave up the 100 back, so she will go for 3 at most.. Dressel biggest threat for 4 will be the fly (50 specially)

Definite legit chance, but so much has to come together. I don’t see him repeating this 100 free time, he’s a true team player and I think really stepped up plus first swim of the meet… I think dogfight between Dressel/Mcevoy/Adrian for 47 mid to win it.
IMO the 50 fly is going to be the hardest to nail, followed by 100 Free then 100fly and best chance 50 Free.

But at the Olympics and every NCAA meet before 2017’s he’s been faster individually than he has been on a relay even when he went with a relay start…. I won’t accuse him of not being a team player because I don’t know him personally and relay’s can be nerve racking but based on the stats i’d say he has a decent shot a replicating his AR or even going faster.

fair enough, good point regarding Olympics and NCAA’s I hope he can pop off something ridiculous.

It will be between dressel adrian and scott

I forgot about Scott, in fact reassessing I Feel Dressel and Scott battle it out with Adrian and mcevoy for bronze.

But 8 total medals a possible lock if they put him on the 4x 200 as well as mixed.

What did McEvoy split?

Same time he did on a flat start.. Kinda disappointing

If Dressel wins
50 free
100 free
50 fly
100 fly
3 relays then we know that this guy has more potential than any male swimmer besides Phelps.

Won´t think we could say he is better than Thorpe, Sun, PVDH.. winning that he can get into the top of history… but some guys, specially Thorpe level is on another game..

50 fly……he spent 10 minutes in the warm up pool looking for Ben Proud. He then swam up to him and asked “Have you seen John?”. Not the cleverest psyche out move I’ve heard of…..because he didn’t even medal.