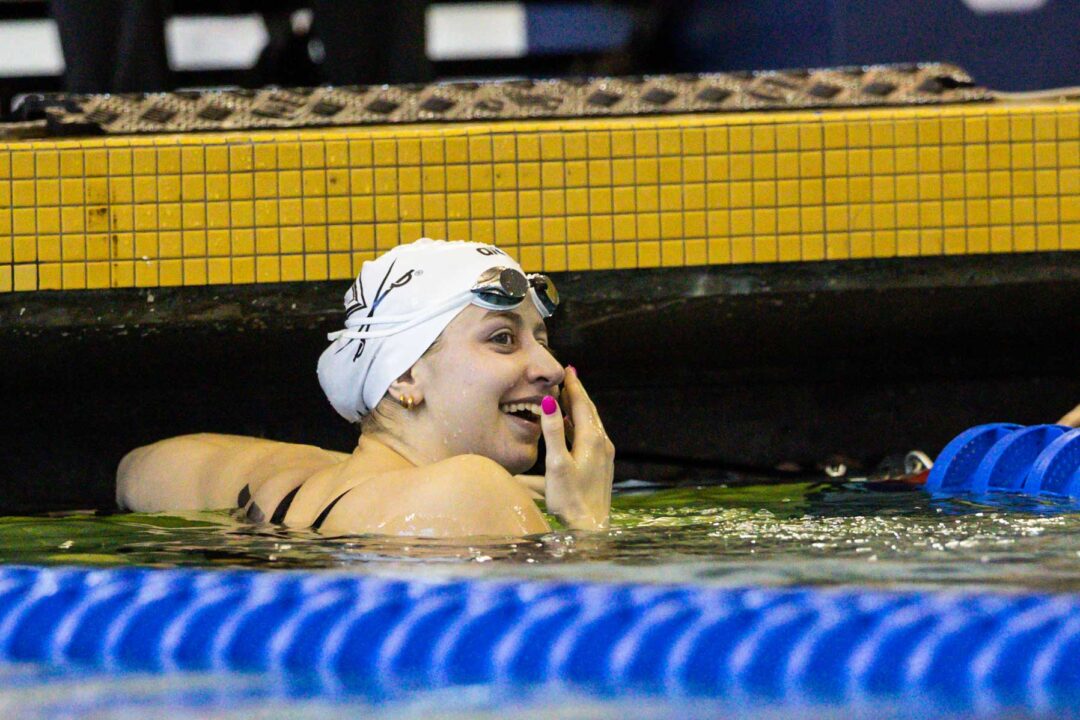 Douglass broke the U.S. Open, American and NCAA Records by clocking 20.87 in the 50 free prelims at the Women's NCAA Championships. Current photo via Jack Spitser/Spitser Photography

University of Virginia junior Kate Douglass had a phenomenal start to her individual program at the 2022 Women’s NCAA Championships, blasting her way to the fastest swim of all-time in the 50 freestyle preliminaries.

Douglass put up a time of 20.87, breaking the previous NCAA, American and U.S. Open Record of 20.90, set by former University of California star Abbey Weitzeil in 2019. Read more on the record swim here.

Watch the race video below, as Douglass dominates the ninth and final heat over UNC’s Grace Countie (21.53) and NC State’s Katharine Berkoff (21.56).

One heat earlier, UVA freshman Gretchen Walsh posted the second-fastest time of the session in 21.09.

In the first circle-seeded heat, Alabama’s Cora Dupre (21.47) touched first from Lane 1 to qualify third into the final, while Michigan’s Maggie MacNeil (21.53) was second to advance into the final tied for fourth.

In the women’s 200 IM, Virginia sophomore and defending champion Alex Walsh cruised to the top time in 1:53.00, leading Stanford freshman Torri Huske (1:54.05) by over a second.

In the first circle-seeded heat, Louisville junior Abby Hay (1:54.33) touched first and advanced into the final in fourth, while Tennessee’s Ellen Walshe added over two and a half seconds to her time from SECs and finished 15th in 1:55.63.

Watch Thomas win Heat 8 and Sullivan and Weyant go 1-2 in Heat 7 below.

For a full recap of the preliminary session on Thursday morning, click here.

Wow! I don’t know many who are that strong underwater in a 50 free!

excited to see what the hoos do tonight!

Douglass’ launch didn’t look as dominant here as in the relay, where it seemed to defy gravity

That breakout off the turn for Douglas was awesome.

Douglass is RAZOR thin to that 15 meter mark. She’s clean, but man that’s cutting it close!!!

I’m thinking she’s gonna be right on 20.0 if they have her anchor their 200 free relay tonight. Gonna be fun to watch!