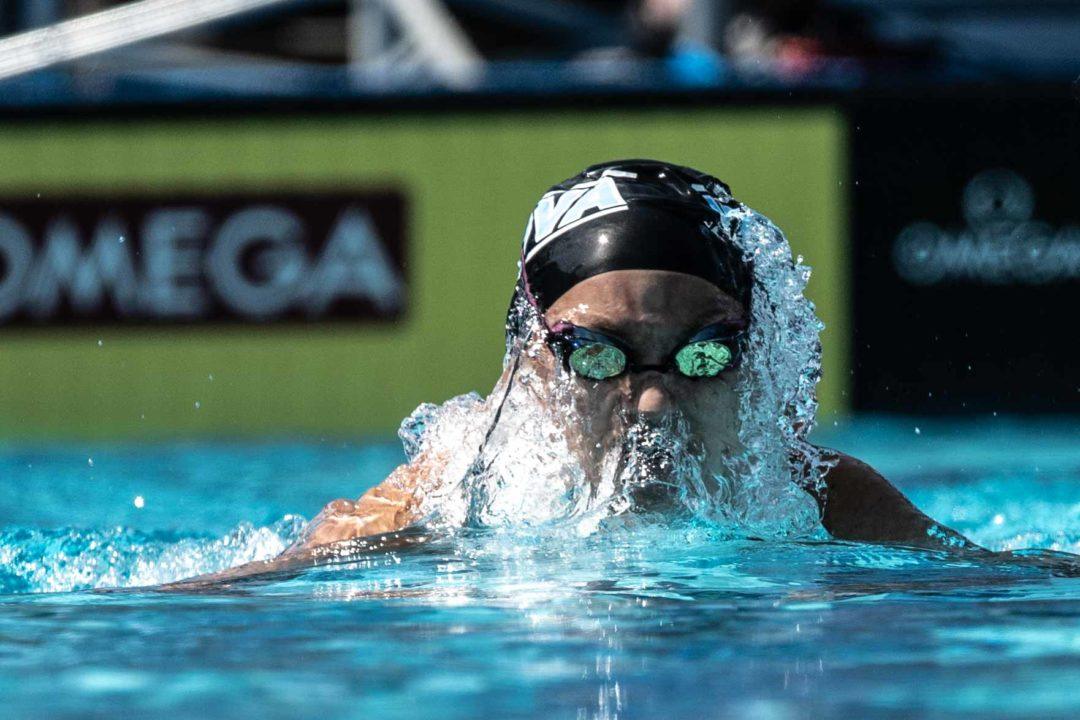 The USC Trojans continued their dominance during Day 2 Finals of the 2021 Art Adamson Invitational. The men and women won all four relays during the session. Archive photo via Mike Lewis/Ola Vista Photography

The University of Southern California did not back down on Day 2 of the 2021 Art Adamson Invitational. The women Trojans’ A relay picked up an NCAA A cut in the first event of finals. They won every race except the 200 free on night 2 of racing. Both the men and women remained first in team scores through Day 2.

Calypso Sheridan, Kaitlyn Dobler, Anicka Delgado and Laticia Transom posted a time of 1:35.92 to improve their previous time from this season. Their 1:36.01 made them the second-fastest relay so far this season. They finished three seconds ahead of Texas A&M.

Isabelle Odgers of USC dominated the 400 IM to win her second IM title of the invite. She won the 200 IM on Day 1. Odgers went a personal best time of 4:08.89 and touched 6 seconds ahead of runner-up and teammate Nicole Pavlopoulou (4:16.96).

Texas A&M showed off their depth in the 400 IM, going 1-2-3-4. Anze Erzen went a personal best time of 3:44.58 to win the event. Munzy Kabbara, Andres Puente Bustamente, and Vincent Ribeiro followed closely behind.

USC’s Calypso Sheridan took a half second off of her personal best time to win the 100 fly. Her time of 52.10 placed her a body length ahead of the rest of the field. Olivia Theall of Texas A&M was second.

Texas A&M Chloe Stepanek won the 200 free, a day after coming up short of winning the 500 free. She crushed the competition, touching first in 1:45.16. Katarina Milutinovich of LSU was second in 1:46.84.

Wen Zhang picked up Air Force’s first win of the invite in the 200 free. He went a personal best time of 1:33.65 and went 3 seconds faster than his entry time. He finished a second ahead of Texas A&M senior Kaloyan Bratanov (1:34.64).

USC sophomore Kaitlyn Dobler won her second individual event of the invite. She touched first in the 100 breast by 1.5 seconds, going a 58.72. Nevada’s Donna dePolo picked up some points for her team, touching second in 1:00.47.

USC graduate transfer Trent Pellini posted the top time in the country so far this season in the 100 breast. He dropped a new PB of 51.28 to top the rankings.

The men’s 100 back went to Texas A&M’s Ethan Gogulski who touched first in a time of 46.14. He had a comfortable lead in the race, finishing 0.88 seconds ahead of USC’s Evangelos Makrygiannis.

USC put up another dominant performance in the final event of the evening, winning the 800 free relay by 6 seconds. Laticia Transom, Marlene Kahler, Isabelle Odger, Anicka Delgado made up the winning relay, clocking in at 7:07.87. Texas A&M touched second and USC’s B relay was third.

Similar to Day 1, the Trojans got to the wall first in the final event of the night. Alexei Sancov, Victor Johansson, Daniel Matheson, and Max Saunders finished first in 6:22.24. Texas A&M and LSU rounded out the top three finishers.