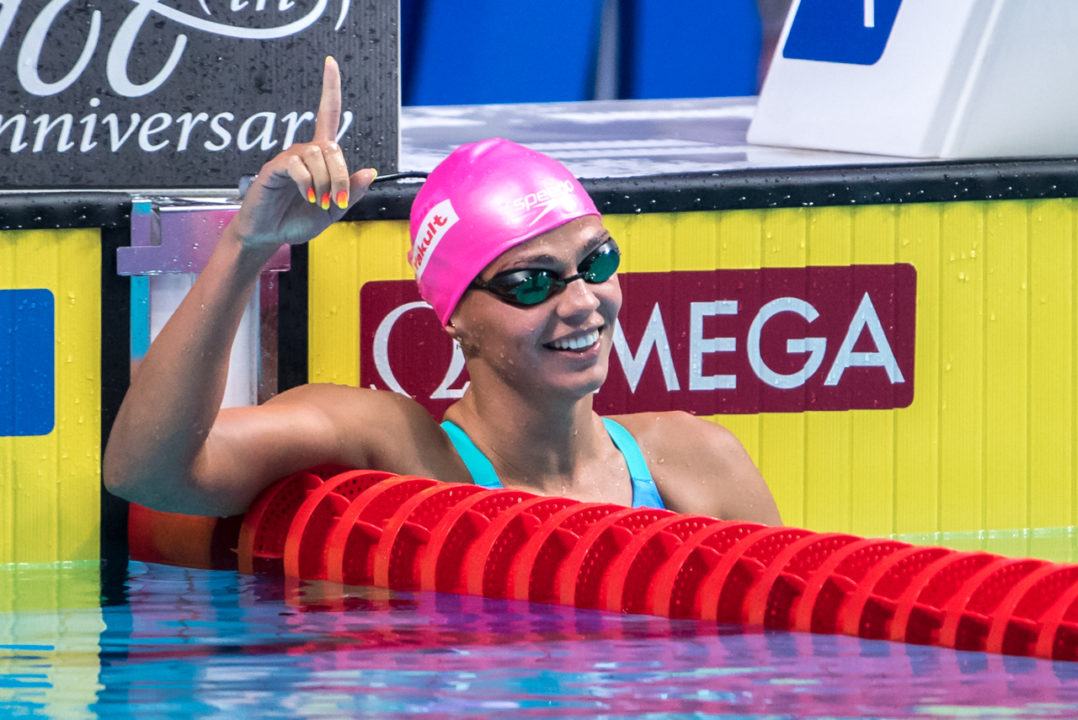 Watch as Russia's Yuliya Efimova beats the field by over 2 seconds in the final of the women's 200m breaststroke in Budapest. Current photo via Peter Sukenik/www.petersukenik.com

Really, it wasn’t even close. After a week-long media frenzy of King-versus-Efimova, Russia’s Yuliya Efimova took home the gold medal in the women’s 200m breaststroke with nary a competitor in sight. Efimova finished over two seconds ahead of the field with 2:19.64.

Lilly King, who had won a gold medal in the 100m breast earlier in the week, took it out hard, turning in 31.79 at the first wall. But the 200m breast is a different animal, and the rest of the field patiently moved up over the next two 50s. Indeed, King’s 100 and 150 splits were the slowest in the final and she found herself in fourth place turning into the final 50 meters. Meanwhile, her teammate Bethany Galat had turned seventh at both the 100 and 150 walls. Galat blew past King, and everyone else except Efimova, on her way to a second-place finish, while China’s Shi Jinglin beat King to the wall for the bronze medal.

Russia’s Yuliya Efimova held a steady pace through the front half, waiting to make her move on the 3rd 50. She took off and built a sizeable lead over the field down the stretch, winning by 2 seconds in 2:19.64. With that, she was just half a second shy of the World Record.

Galat demostrated true sportsmanship and showed the world not every American behaves so vulgarly as Lilly King. So proud of Galat and congrats to Yulia.

Just try & get a conviction in a US court based on untested forensics ( which is all ped testing is ) . When you let emotion drive you , it becomes the sad & pathetic case of a Mitichondrial Depletion Syndrome baby being promised treatments never before having been tested on lab mice !

Ppl still whining about Meldonium are like President Trump & The Pope & scientific null Americans intervening by Twitter – Yes we can save him !

Alas he is dead but you guys can still help OJ find the real killer , now that he is free .

When Lilly gets tired in the 200 she really loses form and her head shifts sharply left. It’s always like that to some extent — head moving left instead of straight forward and back — but it reaches absurd degree as she tires. Some sideways energy as opposed to full steam ahead.

She didn’t falter so much last night compared to other 200s but from the overhead shot — which normally I despise — you could see Lilly’s form break compared to the rest of the field.

Great job by Galat. I was rooting for Meili in the 200 at Trials to grab the second spot. She faltered badly. I think it was 7th. Meili at her best wasn’t going… Read more »

I think the treatment of Efimova by the likes of bbc pundits has been shallow, very grudging and caricature in nature! This athlete is clearly a brilliant swimmer who got punished for drugs but is back in, Gatlin style. Rules are rules and forgiveness is not a dirty word. Credit where credit’s due!! I bet those same broadcasters are doing cartwheels at beating an average but no doubt devetoing 4x200m men’s team who brought home YET more precious metal!!

It’s no different than people like Arod, Bonds, Clemens. They are and always will be cheaters. Yulia is no different.

I’m so happy that some of you are congratulating Yuliya! She works hard just like the rest of us swimmers, so to see some positive comments is so refreshing! Yuliya was a complex case, and most people did not have the care to read the truth, and the details. Leading to an abundance of false articles, and hate. She is not the typical cheating dope story. We all love Efimova, and we should be happy our world is getting faster and faster with CLEAN athletes. Great Job Yuliya, keep up the hard work! Go Efimova Team!!! That world record is almost yours again!

I don’t understand why some of you are still bashing Yuliya. People have not cared enough to look into this case, so people just listen to what the articles say… It’s not just a cheating dope story. There’s more to it. And there is a reason she was let back into the sport. I’m glad at least some of you are posting nice comments! We all love the sport of swimming just like Yuliya, so let’s be happy that the world is getting faster and faster! Congrats to Yuliya, the hard training is paying off! Go Efimova Team!!!

People bash Yulia because she’s a cheater. You ask people to look into the case, so I’ll ask if you’ve looked into the case. When did Meldonium go on the WADA watch list? When did Yulia stop taking it?

Another reason that Yulia is not beloved is because she doesn’t seem to care that she’s been caught. What athlete with any hint of self awareness poses in a provocative way (http://www.swimvortex.com/efimova-waggles-her-fanny-u-s-at-king-co-with-go-to-cas-t-shirt-sales/) and basically tells her competitors and “fans” that she “got away with it”.

Give us a real reason to root for Efimova. I’ll wait.

I agree with Fritz. I have read the story, and you know what, I don’t care. She cheated and got caught, TWICE. She’s lucky I’m not running things, because she would never have seen another competition… ever.

This goes for all swimmers, including any Americans that have been caught.

you read the story. exactly what i am saying the stories online dont have the paperwork in them thats why you cant defend her becasue you have no reason to if you dont do your research.

A real reason to root for Yuliya is that she stopped taking Meldonium before it was illegal. How about you do your research? She took meldonium BEFORE it was banned. When scientists tested it and banned it on January 1st, she stopped. The scientists didn’t know how long it took to leave the blood stream, so they tested. Not knowing it was too early. She, along with hundreds of other athletes, failed, but soon the scientists realized that 6 months was too early and tested 2 months later and she did not fail. Showing that she did NOT take meldonium when it was illegal. So, that’s why we commentators defend Yuliya, because we know what actually happened, and care enough… Read more »

Again, wow…. the lack of ethics one needs to apologize for convicted and sanctioned drug cheats is truly nauseating.

Do not agree with 200 BREAST’s post. One is a proven cheater and Galat was a gracious runner-up. Looked like she congratulated Efimova. The winner, as has been pointed by others, won a medal (when she should be banned from competing) and she has (as of today) kept two deserving athletes off the podium and empty-handed. That’s not cool; that’s not fair. True champions don’t use PEDs. That said, it was an exciting race. Hungary has run a truly wonderful World Championships – a swim fan’s delight!

Ahhh she remembered to take her medication this morning