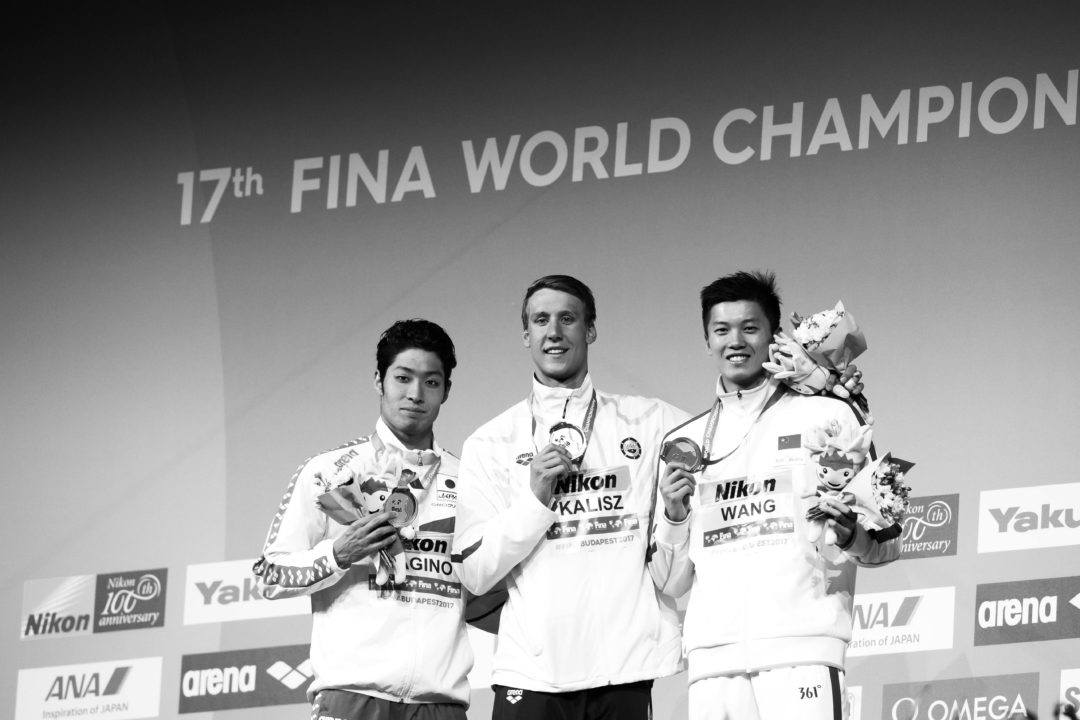 TritonWear and Swim Swam partner to bring you the best in swimming race analysis for the 2017 Fina World Championships.... Current photo via Mike Lewis/Ola Vista Photography

The first event of Day 5 Finals at Budapest brought us the Men’s 200 medley. With Phelps racing sharks in his retirement, and Ryan Lochte still serving his ban due to the incidents in Rio, the race was more open than ever. This year we would see a new 200 medley champion for the first time since 2003, when the USA’s domination of the event began in Barcelona.

Chase Kalisz, Shun Wang, and Kosuke Hagino would all be looking to challenge for the gold after a very exciting semi-final race, with Kalisz putting up the fastest time at 1:55.88 and an impressive 32.38 breast split. Kosuke wouldn’t give up easily though; he swam a slightly slower 1:56.04 in the semi. After taking the silver in Rio, he would try to seize the opportunity to take the gold. An intense final was about to begin.

As the race began, Kosuke Hagino gained a lead in the fly length, finishing in front of the field – and it is easy to see why. He had the second longest pullout and the fastest speed, even with a shorter DPS than most. Shun Wang, right on Hagino’s heels, had a similar length in terms of stroke count, however he was able to produce more distance from fewer strokes, and maintain about the same amount of speed. This positioned him well for the balance of the race, as he conserved more energy to use later than the rest of the field did. Daiya Seto, finishing third on the length, took the most strokes, with the lowest stroke rate and DPS. He may have been with the front of the field at this point, but he had to put out considerably more energy to keep up with Hagino and Wang — energy which will no longer be available for a burst at the end of the race.

Jeremy Desplanches swam what is considered the most technically efficient performance, measured by stroke index — a calculation of speed x DPS for butterfly. However, he wasn’t able to produce the speed necessary to keep up with his competitors, and finished the length in a 3-way tie for last. To keep up with the field, he will need to figure out how to produce speed along with his strong stroke.

Turns are one of the most crucial components of an IM race, and can make or break a win. As the swimmers transitioned from fly to back at the end of the first 50m, it was Kosuke Hagino who was able to execute the fastest turn. He also remained underwater as long or longer than the majority of his competitors, which helped position him well for the backstroke length of this race.

Heading into the backstroke leg, Max Litchfield came out of his turn with one of the longest underwater times, giving him the momentum to propel himself faster than his competitors. He was first to complete the length, finishing .03 seconds ahead of Kosuke Hagino, who in outpaced Chase Kalisz by 0.01 seconds.

Both Wang and Seto fell behind on this leg of the race. Seto had the longest time underwater of the field, breaking just behind Hagino; however his shorter, faster strokes were not able to produce the speed necessary to remain in the top 3 on this length. Shun still produced the fewest strokes this length, but also had the second shortest kickout and was unable to produce the speed necessary to stay in the lead through this length.

Jeremy Desplanches, who had executed the most efficient stroke during the fly lap, was unable to carry that powerful performance through to the backstroke length, losing valuable time and energy. In stark contrast to his fly performance, his backstroke registered second-to-last in terms of technical efficiency. It would be interesting to dig into why his fly stroke is primarily a fewer, stronger stroke strategy, while his backstroke is clearly more of the short, fast variety.
Coming in with the most efficient backstroke was Kalisz, recovering from a slightly slower fly length, was in 2nd place as they hit the 100m mark. He had one of the longest stroke rates, but was able to produce the speed with it, which made this a very efficient stroke for him.

As we head into the back-breast turn, it was again Litchfield and Wang who executed the fastest and longest pullouts.

This advantage of the longest pullouts unfortunately didn’t give Litchfield and Wang the lead they needed to retain their front positions through this length. In the breaststroke length we see two new players, Haiyang Qin and Philip Heintz, picking up pace. Qin’s stroke was the most efficient, as he was able to produce the most speed and longest DPS with the fewest strokes. This was a great advantage for him moving into the final length of the race. Heintz, with one of the shortest pullouts, also swam a solid length, but took a few extra strokes to produce the same speed as Qin.

Kalisz was still picking up pace on their length, further solidifying his frontrunner position ahead of the field. He was able to produce slightly more speed than Qin, but had to take one extra stroke to do so, as his DPS was .14m shorter. At this point he was very well positioned to bring this race home.

Wang, who had been a frontrunner in fly but fell out of the top 3 during his backstroke length, was able to recover slightly by the end of this leg. This wasn’t because his stroke was particularly better or faster than the rest; he maintained his position simply because Hagino and Litchfield were not nearly as strong on breaststroke, causing them to lose more ground than Wang. By keeping his stroke count down, and staying with the middle of the field, Wang was able to secure a solid position to head into the final stretch of this race.

Seto returned to the top 3 this length as well, with one of the poorest strokes in terms of technical efficiency. He used a lot of energy to maintain his position here, which cost him during the rush to bring the free length home.

In the final push of the race, it was Heintz and Kalisz who executed the fastest turn, but they were unable to follow it through with a long underwater here. Wang lost a little ground on this turn, with the slowest turn and shortest time underwater. However, having had one of the most efficient strokes throughout the rest of this race, he had power reserved to bring it home. He was able to compete this length faster than his competitors to finish the race in 3rd place.

Qin once again had a very fast length here, tied with Litchfield for the second fastest of the field. However it wasn’t quite enough to make up for his slower fly and back lengths, leaving him back in 6th place at the end of the race. If he can produce a little more speed on the fly without sacrificing DPS, it will help. But it would appear backstroke is where he should focus, to bring his position closer to the front of the field.

Litchfield, who had been back and forth throughout the race in terms of speed and efficiency, had a solid time underwater, but took the faster, shorter stroke approach, which wasn’t able to produce quite enough speed to put him on the podium. If he could have gotten just a little more distance from each stroke, we may just have heard his anthem at the end of this race.

Hagino retained his position in the top 3, finishing the race in 2nd place. His free length was not among the fastest, but the lead he was able to secure during the rest of the race allowed him to remain ahead of most of the field.

Finally Kalisz, similar to Hagino, didn’t have the fastest or most efficient freestyle length, however he had built enough buffer through the back and breast lengths to remain in front here.

This variety of swimming styles, all resulting in very different positions on the length, proves once again there is no such thing as an optimal race strategy for everyone. Each swimmer has to perfect their performance individually, which is best accomplished by basing training decisions on in-depth data analysis.

This point is even more prevalent in an IM race, as each swimmer excels in one or two strokes, and lags behind in the others. By being able to play to their own strengths and weaknesses during crucial lengths, each of these competitors was able to shine at different points in this race.