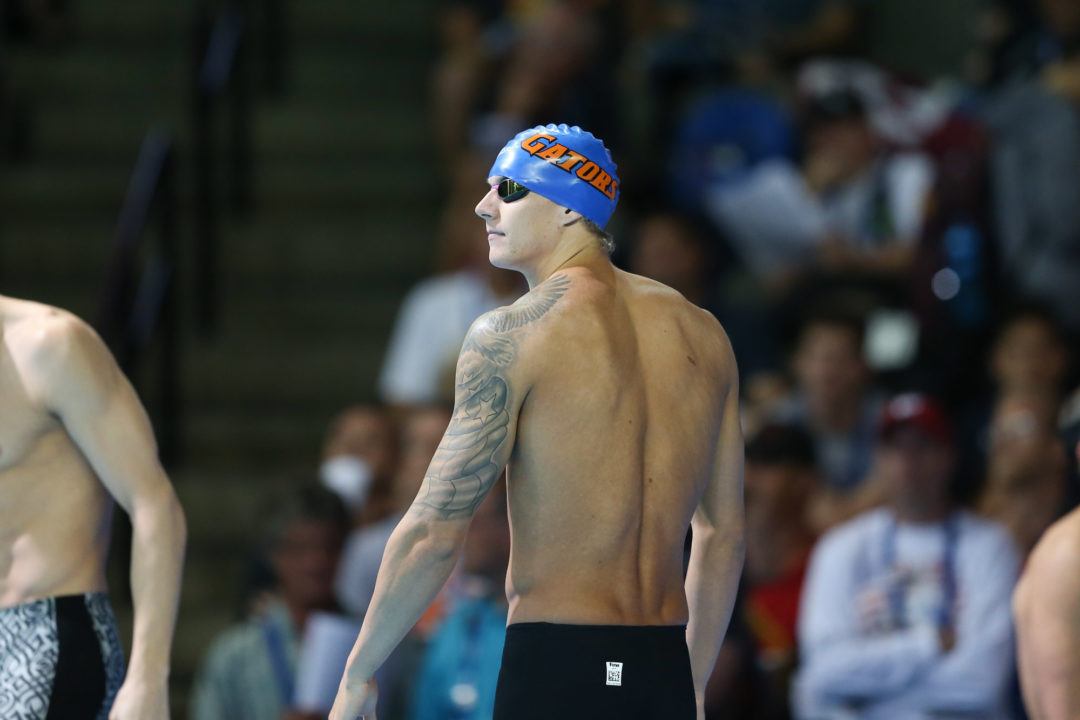 The 2-time Olympic and 7-time World Champion had the first performance of his senior year on Saturday - and it wasn't in the pool. Archive photo via Tim Binning/TheSwimPictures.com

7-time World Champion and 2-time Olympic gold medalist Caeleb Dressel  drew cheers from a 12,500-strong crowd at the Danube Arena this summer in Budapest at the 2017 FINA World Championships. But even that crowd, which served as a phenomenal backdrop for the year’s premier aquatics event, paled in comparison to the roar that Dressel drew on Saturday in Gainesville.

In front of a crowd of 90,000+ at Ben Hill Griffin Stadium on Saturday, Dressel led the traditional pre-game “two bits” cheer before kickoff as the Gators prepared to play conference rivals Tennessee.

As explained by Loretta Race:

“Steeped in tradition, the traditional Gator chant began way back in 1949 when fan George Edmondson spontaneously led that year’s season opener against The Citadel with a morale-boosting cheer. The cheer was about adding up bits (a ‘bit’ an eight of a dollar, so 8 of them would indeed total one dollar) and, with Florida winning that day’s game after having gone on a 5-game losing streak, ‘Mr. Two Bits’ was born.

Since 2014, a current Florida student has been selected to be the guest Mr. Two Bits for one game per season. Past honorees have included NFL Hall of Famer Emmitt Smith and profession golfer Chris DiMarco.”

Below, see Dressel’s energetic performance. As of posting, Florida leads Tennessee 13-3 in the 4th quarter – seeking their first win of the 2017 season.

The Gators’ swim team gets their competition underway next weekend at the All-Florida Invite.

Maybe someone can elaborate on his fashion choices. The yellow button-down Oxford shirt with suspenders, the Florida school colors bowtie and socks, and the short blue jeans with brown leather shoes.

He performed the cheer with a lot of school spirit and energy. He’s got to be one of the top Florida athletes of all-time with his records and NCAA wins.

A trendy take on the Mr. Two Bits outfit.

He finna save the backflip for the start of the 50 Free at NCAAs. Figures he’ll have enough margin and a 17 flat start from the earlier relay