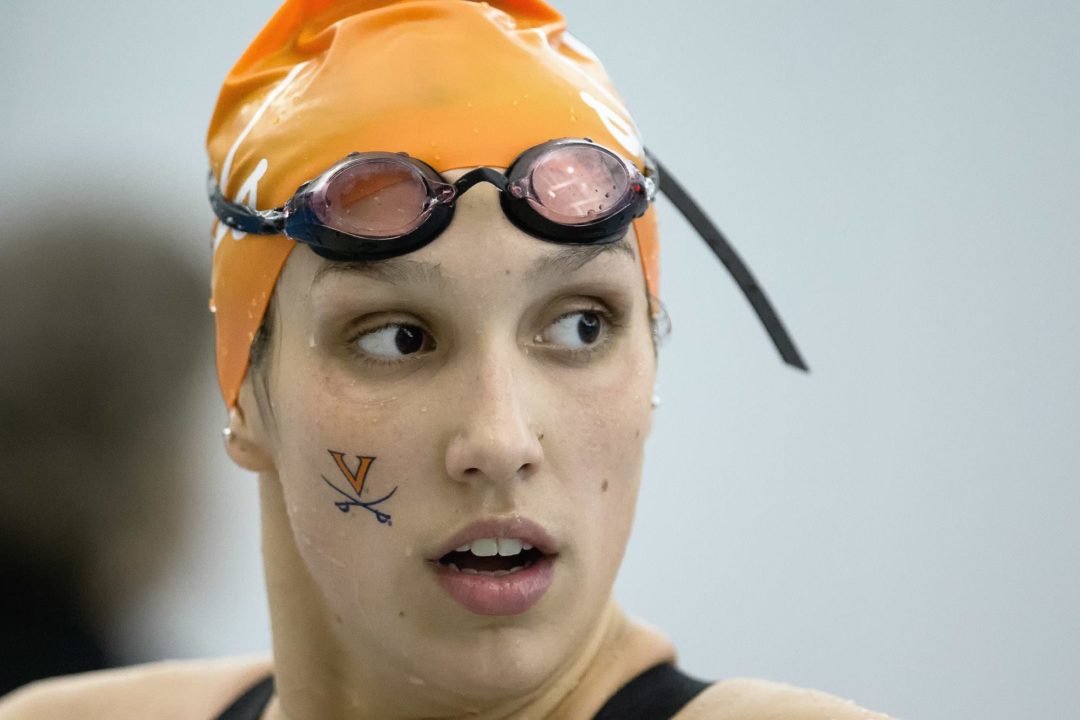 Defending champions of their respective conferences, the Virginia women and Michigan men hold onto leads after one day of the triangular meet at Penn State. Archive photo via Tim Binning/TheSwimPictures.com

Defending champions of their respective conferences, the Virginia women and Michigan men hold onto leads after one day of the triangular meet at Penn State.

Michigan ruled the beginning and end of the session to take the team lead. That effort was bookended by relay wins and individual victories from freshman Evan White.

The Michigan 200 free relay won to open the meet. Though they didn’t come close to their nation-leading time, a 1:20.18 was enough to beat the host Nittany Lions by almost a half-second. That relay was anchored by Bruno Ortiz, who split 19.80, one of just three men under 20 on the relay. (The others were Penn State’s Nate Savoy and Anders Nielsen on the Michigan B team).

Michigan also won the 400 medley relay to close the session, going 3:13.38 to move to 4th in the nation so far this year. Richard Funk was excellent on the breaststroke leg, splitting 52.94 for the Blue.

Virginia managed to stop that Michigan streak, though, in the 100 breast. Yannick Kaeser closed out a gutsy race to beat Michigan’s Ortiz 54.66 to 54.73. Ortiz was closing hard, but the wall came just soon enough for Kaeser to pick up the win.

For Penn State, the story was the return of Shane Ryan. Ryan competed for the first time last Friday after sitting out of the team’s first two meets this season. He seems to be getting back into the swing of things quickly, as he won the 100 free with ease. His 43.83 was seven tenths better than Michigan’s Nielsen, the runner-up.

Also winning for the hosts was backstroker Nate Savoy, who took the 200 back one event before Ryan’s win. Savoy was 1:46.08 to beat Michigan freshman Tristan Sanders.

It was all Virginia individually in the early goings. Courtney Bartholomew bookended a 4-event run with dominating wins to help Virginia grab the early leads.

Michigan finally broke through for a win after those two runner-up finishes. In the 100 free, Ali DeLoof put the Wolverines on the board with a 50.02 win over Penn State’s stud Alyson Ackman (50.11).

The host Nittany Lions went 1-2 in the next race, though, the final individual event of the night. Katie Rowe was 2:00.27 to lead the 200 fly with teammate Katelyn Sowinski just behind.

Michigan took home the 400 medley to close things out. A pair of freshmen made up the front half (Smiddy and Kopas) and a pair of juniors the back half (Marni Oldershaw and DeLoof). The team went 3:41.43, getting a 49.34 from DeLoof on the anchor leg.

In addition, diver Carey Chen won on 3-meter for the Wolverines, scoring 321.65.

Pool records for Savoy (200 back) and Ryan (100 free), according to the PSU Swimming Twitter feed.