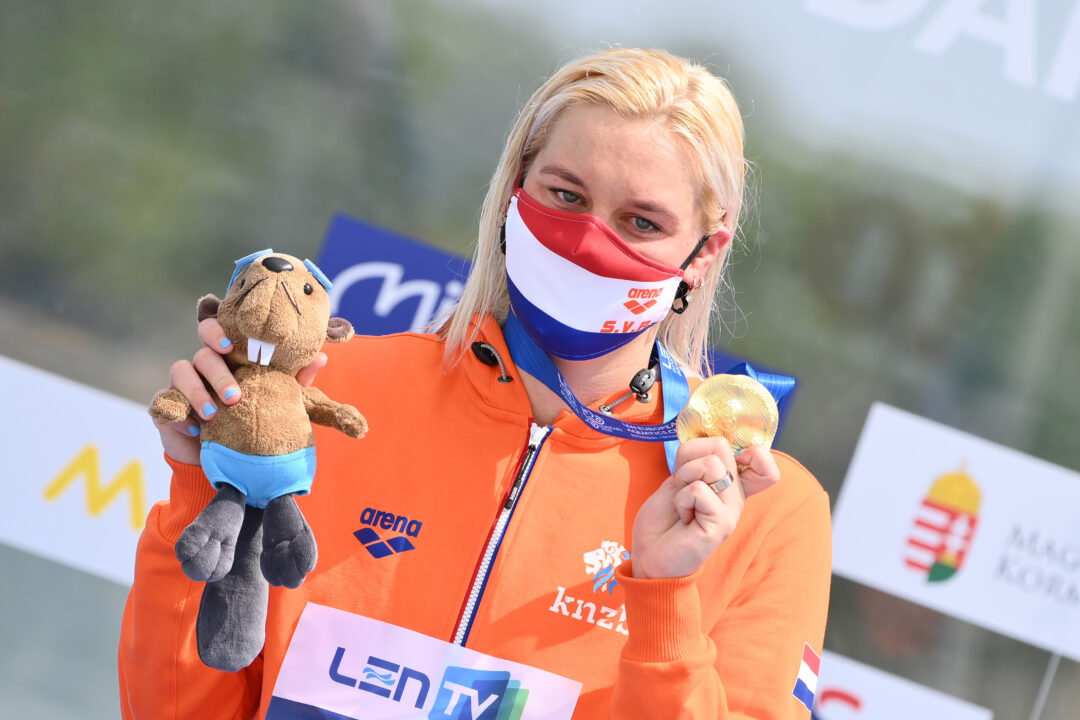 The open water portion of the 2021 European Aquatics Championships has gotten underway in Hungary with the men’s and women’s 5k race. The 5k is the first 4 open water races scheduled to take place at the championships with the individual 10k and 25k, as well as the team 5k race still to come.

Van Rouwendaal will attempt to defend her Olympic title this summer, having qualified to race the 10k in Tokyo by placing 10th in the event at 2019 World Championships. There, she also swam the 5k and placed 11th overall while also contributing to the Dutch team’s 7th place finish in the mixed 5k. The win for van Rouwendaal is yet another on her long list of accomplishments in open water swimming, having won 10k gold at the 2016 Olympics, as well as gold in both the 5k and 10k at the 2018 European Championships and silver in the 25k. At 2018 Euros, she was also a part of the Dutch contingent that won took gold in the mixed team event wherein she, Esmee Vermeulen, Pepijn Smits, and Ferry Weertman took gold over Germany by 6 seconds.

France’s Océane Cassignol had a bit of a breakout performance in the race to take bronze, marking her first individual major international medal. Cassignol moved up from her 10th place finish in the event at 2018 Euros.

Prior to this performance, she collected a gold medal in the 7.5k at the 2017 European Junior Open Water Swimming Championships, as well as gold in the team 5k at 2017 Worlds along with French teammates Logan Fontaine, Aurélie Muller, and Marc-Antoine Olivier. Cassignol has also won a number of French Championships medals between 2016-2020, as well as three golds at the 2019 World Military Games.

2018 Euros silver medalist in the event Leonie Beck was present for Germany, ultimately placing 5th in the event while France’s Lara Grangeon improved upon her 8th place ranking in 2018 with 4th.

Italy managed to pick up 2 medals on the men’s side of the 5k as Gregorio Paltrinieri and Dario Verani took gold and bronze, respectively, while France’s Marc-Antoine Olivier took silver. Paltrinieri swam to victory with a 55:43.3 while Olivier came in less than 2 seconds later with a 55:45.1 and Verani was a 55:46.6.

Paltrinieri’s 6th place finish in the 10k at 2019 Worlds earned him a spot in the event in Tokyo where he will have his Olympic open water debut. He will also race the 1500 freestyle, looking to defends his title and the 800 freestyle. In relation to his international swimming career which dates back to the 2012 Olympics, Paltrinieri is relatively new to the open water scene, having swum his first-ever World Championships open water race in 2019 when he placed 6th in the 10k. Paltrinieri has been long known for his 1500 freestyle in which he won Olympic gold in 2016 (14:34.57) and set a new short course world record in 2015 of 14:08.06 which still stands today.

Silver medalist Marc-Antoine Olivier collected his first individual European Championships medal in the 5k, having settled for 7th place in the event back in 2018 and 4th place in the 10k. His sole European Championships medal prior to this came in the team 5k in 2018 where he, Logan Fontaine, Aurélie Muller, and Oceane Cassignol took bronze. Olivier does, however, have a number of World Championship medals to his name, having collected gold in the individual 5k and team 5k in 2017, silver in the individual 10k in 2019, and bronze in the individual 10k in 2017. Like Paltrienieri, Olivier’s swim at 2019 Worlds qualified him to swim the 10k in Tokyo this summer.

Just as countrymate Paltrinieri is, Italy’s Dario Verani is relatively new to the open water major international scene, collecting bronze during his European Championships open water debut. Verani swam to third place with a 55:46.6, getting in less than a second ahead of defending champion Kristóf Rasovszky from Hungary’s 55:47.3. Italy’s Marcello Guidi managed to give Italy 3 of the top 6 finishes by placing 6th with a 55:47.7 while Logan Fontaine rounded out the top 5 for France with a 55:47.5.

Legendary name for the French Ocean swimmer! Don’t tell Yozhik but right up there with M Stepanova the 400 hurdler.

first 9 in both men and women events in under 8 second differences, much less than an 800 final. Must have been exciting races!

Wellbrock in 9th place without a wetsuit. Impressive

Yes, very impressive. The wet suit makes a difference for sure.

Does anyone know why Florian Wellbrock didn’t wear a suit like everyone else?

Joint decision with his coach about 2 hours before the race. The water was slightly warmer than yesterday so they gave it a try