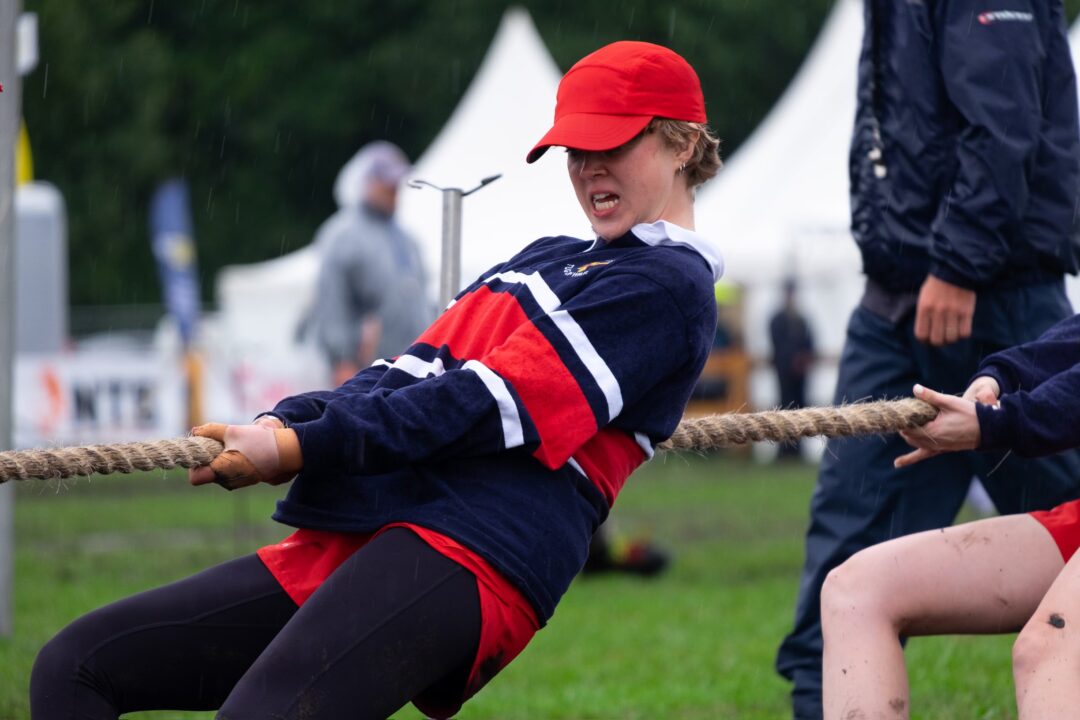 University of Vermont diver Annika Overvig recently competed at the World Championships, but not in the sport you’d expect.  Current photo via Courtesy of Annika Overvig

University of Vermont diver Annika Overvig recently competed at the World Championships, but not in the sport you’d expect.

The 19-year-old sophomore from Minnesota represented the U.S. on the global stage at the Tug of War World Championships from Sept. 15-18 in the Netherlands. Overvig pulled in the mixed 580kg weight class along with her sister and brother, placing 6th out of 11 teams with her club, the DJ’s.

“I wasn’t supposed to compete with them actually,” said Overvig, who was traveling internationally for the first time. “Co-ed was our first day and my sister was on the team, so it was us two. But one of the guys had to be subbed off for an injury halfway through and my brother was the sub, so I actually got to pull with both my siblings on my first rope at Worlds. It was really cool.

“We did better than what a lot of people expected out of us,” she added. “We’re all pretty young, and as far as experience wise, this was our first Worlds for a lot of us. So we didn’t place or make it to the finals, but we weren’t supposed to. We still got in against a lot of good teams and overall people think we have a lot of potential.”

Overvig grew up as an elite gymnast before injuring out and switching to diving as her main sport. During her freshman year of high school, she took up tug of war because her brother got into the sport through a friend whose dad coaches. It became more of a focus this past offseason after Overvig suffered a back injury last season at Vermont that disrupted her diving career. She believes that training for tug of war has helped with her recovery.

“I trained pretty aggressively this summer and I came back and all my coaches commented on how strong I look,” Overvig said. “I’m not diving a ton right now because unfortunately last year I had a nasty back injury from diving. We’re still kind of figuring out a training plan that works. But I definitely got a lot stronger over the summer and my back has been better so far I think because I got a lot stronger.”

Stability and lower-body strength are key components of both tug of war and diving.

“Overall, it’s a lot of small muscles,” Overvig said. “It’s a lot of stability. You’d think tug of war is a lot of arms, but it’s actually leg-based, because that’s where your strength comes out of. Same thing with diving.”

The benefits from tug of war go beyond physical fitness. Overvig says the sport can develop the type of mentality necessary to perform high-pressure dives.

“I think a huge component of diving is a mental toughness,” she said. “For tug of war, if you’re not mentally checked in, there’s no way you can sit there with a team for three minutes. It’s not comfortable sitting — you’re working, your legs are screaming. To have the mental toughness to stick in with it and want it that bad, I think that translates really well to working under pressure in diving.”

Overvig is also learning lessons from the team aspect of tug of war. There are few sports where you are more connected to your teammates.

“I think it’s a really cool community of people,” she said. “I was pulling against people who we didn’t even share a language with, but you could mention certain words that were tug of war techniques and everyone knew what everyone was talking about.”

“That’s the year we’re shooting to be competitive to the point of medal round,” Overvig said of the 2024 edition in Germany. She also hopes tug of war might be re-introduced to the Olympics in 2032. The sport was part of the program at the 2022 World Games in Alabama.

I actually asked her about that scene, and although she hadn’t seen it, she said the strategy of suddenly ceasing to pull is not allowed in competitions