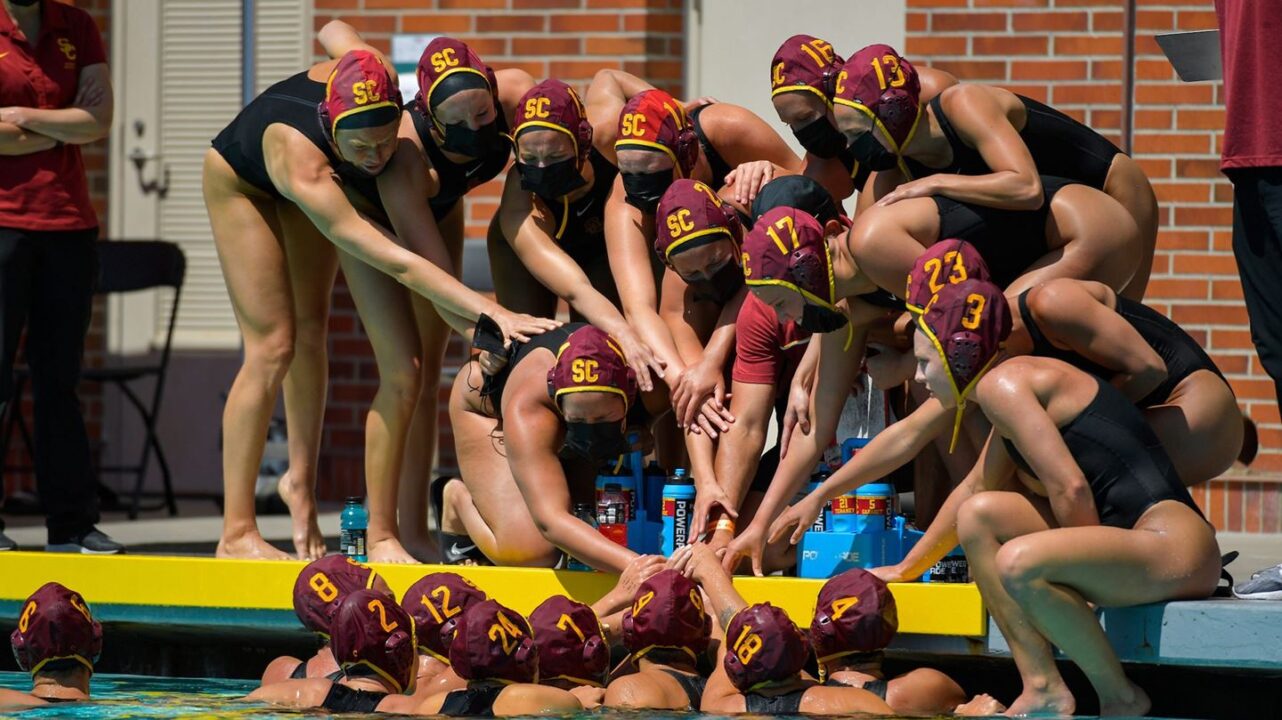 The Trojans will make their 17th straight NCAA appearance after a third consecutive MPSF title. Archive photo via John McGillen

The USC women’s water polo team has secured its 17th consecutive NCAA tournament berth in earning the No. 1 seed into this 2021 tournament. The winners of the MPSF Tournament for the third straight time, the Trojans will take a 19-1 record into the 2021 National Collegiate Women’s Water Polo Championship, hosted this year by UCLA at the Spieker Aquatics Center from May 14-16. USC will be looking for its seventh national championship, having won its last title in 2018.
USC head coach Marko Pintaric is in his second season at the helm, and this marks his first NCAA Tournament with the Women of Troy after last year’s competition was cut short due to the coronavirus pandemic in March 2020 with USC ranked No. 1 in the nation. This season, USC boasts a 19-1 overall record along with the MPSF Player of the Year in Maud Megens and Pintaric as MPSF Coach of the Year for the first time. This year, USC has gone 11-1 against teams in the NCAA field. The Trojans are averaging 12.0 goals per game and allowing just 7.4 goals-against. First-team All-MPSC honorees Denise Mammolito and Maud Megens lead USC in scoring with 45 and 37 goals, respectively. Meanwhile, go-to goalie Holly Parker averages 8.3 saves per game for the Trojans. All are in their final seasons as Trojans, looking to wrap their USC careers with another national championship. All three were members of USC’s 2018 NCAA Championship team, along with captain Kelsey McIntosh and fellow seniors Verica Bakoc, Sabrina Garabet and Randi Reinhardt.
Winners of six previous national championships, USC holds a 34-12 all-time record in NCAA tournaments. USC’s last NCAA run in 2019 wound up with the Trojans edged out 9-8 in the title match by host Stanford. The Trojans were 12-1 overall and had hopes for a 2020 championship when competition was brought to a halt by the coronavirus pandemic. USC’s first title came in 1999 before the NCAA sponsored women’s water polo. In 2004, USC posted the first-ever undefeated season on the way to capturing the 2014 NCAA title. USC’s third title came in 2010 — the last time the Trojans swept the MPSF coach, player and newcomer awards — in a championship won over Stanford. Three years later in 2013, the Trojans topped the Cardinal in tripe sudden-death overtime — the longest NCAA final in history — to claim a fourth national championship for USC. In another three years, USC was back on top once more, posting a second undefeated season en route to the 2016 NCAA Championship in another epic battle against Stanford. And 2018 brought USC its sixth crown in a defensive 5-4 win over Stanford at the Trojans’ Uytengsu Aquatics Center.
This year’s National Collegiate field includes seven automatic qualifiers from conference championships and three at-large teams. Six teams qualify directly to the championship field, and the remaining four teams will compete in Opening Round games  on May 12. Those winners will advance to quarterfinal games set for May 14, with semifinals held May 15 and the NCAA Championship game set for 3 p.m. on May 16. All games will be played at UCLA’s Spieker Aquatics Center.