USC Commit Erica Sullivan to Defer Enrollment Until After Tokyo 2020 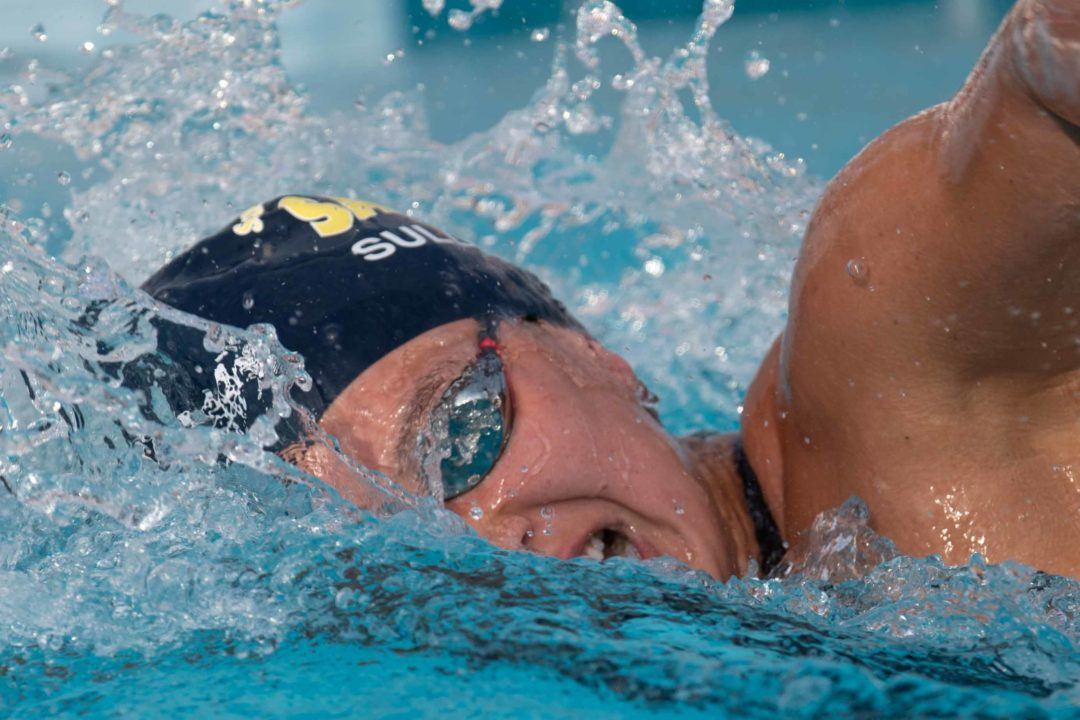 Sullivan was previously planning to defer only one semester, joining USC in January 2019. Archive photo via Mike Lewis/Ola Vista Photography

Sullivan, 18, graduated high school in the spring of 2018 and was previously planning to defer her start at USC just one semester before joining the team for championship season in spring 2019. However, following a breakout summer that saw her finish 5th in the 800 and 3rd in the 1500 at the 2018 Phillips 66 National Championships, she will instead push back school and set her sites on making the 2020 Olympic team (as Olympians Katie Ledecky and Abbey Weitzeil did prior to Rio 2016).

“I decided to defer for a total of two years because I’ve recently been given an opportunity to follow my dreams,” Sullivan told Swimming World. “When I committed to USC there was no way to predict how far I would come. Dave [Salo] and Catherine [Kase] have gone above and beyond to show their support for me in a situation where a lot of coaches wouldn’t. I wish the Trojans the best for the upcoming season and I still plan to join them after the Olympic cycle.”

USC’s women finished 12th at the 2018 NCAA Championships, with then-sophomore Becca Mann leading the way in distance events with an 18th-place finish in the 1650. However, Mann opted to turn professional prior to the 2018-2019 season, and USC currently ranks zero women in the top-30 of the 500 and 1650.

In addition to her rising pool swimming stock, Sullivan is an accomplished open water swimmer. She is the reigning open water 5K national champion and finished 3rd in the 10K this year. At the 2018 Pan Pacific Championships, Sullivan finished 7th in the 10K. Open water may be her best shot at the 2020 Olympics: to qualify for Toyko, swimmers must finish in the top-10 at the 2019 FINA World Championships, or top nine at the 2020 Olympic Marathon Swim Qualifier.

I thought HS kids had 1 year to delay enrolling in college before they start losing eligibility. Am I wrong or has the rule changed?

In Division I, you still have 5 calendar years to play 4 years of eligibility after graduating from high school. She’s sitting out 2 years, so that would cost her 1 year of eligibility, plus her ‘redshirt’ year.

I believe she can take an Olympic gear and still have 4 years left.

She graduated high school last spring. She would still lose a year.

She would not lose a year. It is not 5 years after high school graduation. Eligibility is 5 years to complete 4 after enrolling as a full time student at any college. As long as she hasn’t enrolled that 5 year clock does not start.

I dunno about that… unless you’re one of the top 3 or 4 names it’s hard to imagine making real money as a pro. I guess you could grind it out on your own while taking college classes, but it sounds more fun to have the real college experience. I guess it would be. an interesting decision… there’s a more viable pro system now than there was when Katie Hoff was coming up.

Wow, did not see this coming.

To be fair, you also didn’t see Robert The Bruce’s betrayal coming either….